Monte Alto, Texas– A woman was caught on camera stealing a bottle of alcohol from a convenience store. This isn’t the first time this happens, store employees are now seeking justice.

Several suspects are caught on camera burglarizing multiple vehicles at an apartment complex in Pharr. On Sunday, Pharr police responded to a call concerning the theft of vehicles on the north block of Ebony Street. The preliminary investigation video reveals that several males arrived to the apartments in a white passenger car and opened multiple […] 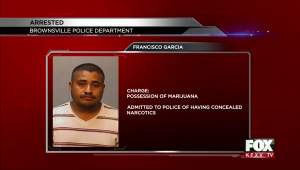 BROWNSVILLE (KFXV) — Police in Brownsville arrested one man after catching him on on video– allegedly selling drugs. Officers say they stopped 28-year-old, Francisco Garcia near the 400 block of Morningside Road after watching a possible drug exchange. Garcia admitted to police of having marijuana concealed inside his vehicle. Investigators found 11.4 grams of marijuana […]

Have you seen this person? McAllen Police Search for Burglary Suspect

We have an update to a story we brought you Tuesday night of an aggravated robbery, all caught on camera. Wednesday afternoon, investigators say the suspect has turned himself in. The Harlingen Police Department reports that Miguel Angel Flores — wanted for an aggravated robbery on the 2200 block of North Commerce Street, and a […]

Thief caught on camera breaking into a Mission business

Take a look at the surveillance video. He is seen breaking the glass door of what appears to be a restaurant, opening the cash registers, taking an unknown amount of cash, and then taking off. The incident happened May 15th at around 3 a.m. Police are still looking for him. If you recognize him or […]

The Harlingen Police Department caught another person for a burglary this time at Harlingen High School. According to police an assistant principal reported an unknown male later identified as twenty-three-year-old Frankie Jones of Racine, Wisconsin. He entered into several rooms where he damaged electronic items, vandalize walls and windows, removed door knobs, discharge a fire […]

Two Wanted in Mission for Robbery of Business

MISSION (KFXV) — The Mission Police department needs the help of all Fox viewers to find a man and woman – police say were caught on camera committing a robbery of a business. According to investigators, the duo is wanted for their involvement in a robbery that happened on April 12th. If you recognize them, […]

Weslaco (KFXV) Authorities are asking for the help of all Fox viewers to identify and locate a suspect in the theft of a credit card. According to the Weslaco Police Department, the woman caught on camera, allegedly made various transactions with a stolen card. She’s described as having wore a white blouse and green pants […]

Mission (KFXV) — Police are looking for two men who investigators say broke into a home. The vehicle, caught on camera, is believed to be the one used by the men to make their getaway after breaking into the home. If you have any information on this case, contact the Mission Crime Stoppers at (956) […]