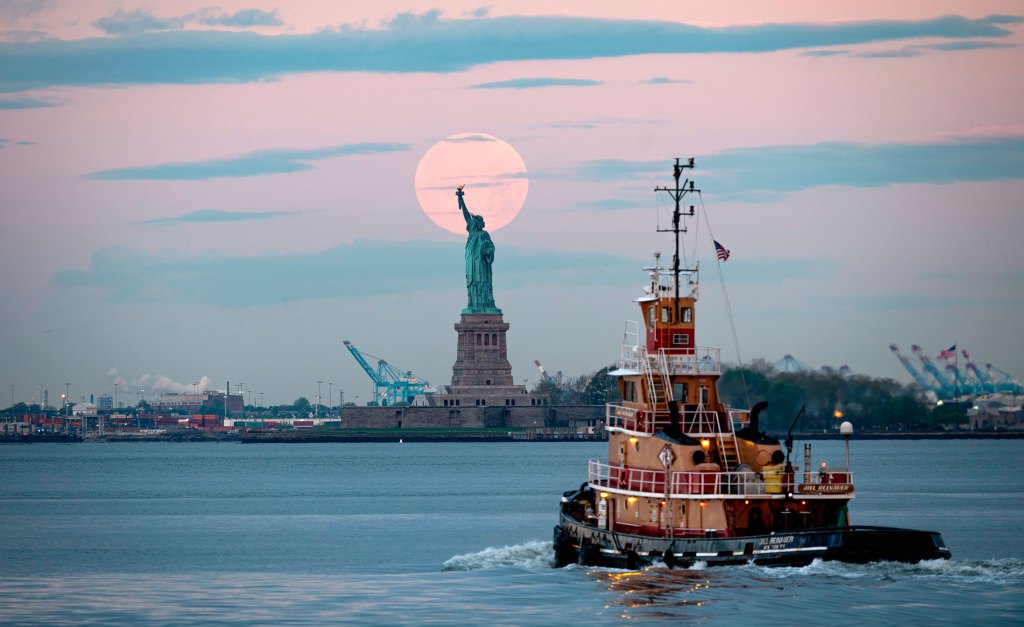 When to see the total lunar eclipse and ‘flower’ supermoon

The full moon on Wednesday, May 26, will be the first total lunar eclipse since January 2019, according to EarthSky. It will take the moon just under three hours to cross through the Earth’s shadow, but the actual lunar eclipse will last for about 15 minutes.

A lunar eclipse happens when the sun, Earth and full moon align. During the eclipse, the moon will have a reddish hue from the sunlight filtering through Earth’s atmosphere, according to NASA. Many have labeled this a “blood moon.”

Depending on your location, you might be able to get a glimpse of part of the eclipse. Most of North and South America will be able to see it in the early morning hours while eastern Asia and Australia will see it in the evening.

There are two to four supermoons each year, and they’re often a brilliant sight because they’re brighter and larger than a normal full moon. The definition of a supermoon varies, but it’s generally defined by how close the moon is to the Earth.

The full moon is called the “flower moon” in May because it’s when flowers blossom across parts of North America, according to The Old Farmer’s Almanac.

Many Native American tribes across the country also took inspiration from spring’s blossoms when naming May’s full moon, according to the Western Washington University Planetarium.

The Anishinaabe tribe in the Great Lakes region calls the full moon “waabigwani-giizis” or “blossom moon.” The Lakota tribe on the Northern Plains call it “canwape to wi” or “moon of the green leaves.”

Some tribes named the moon after a popular red berry, with the Potawatomi tribe in the Great Lakes region calling it “te’minkeses” and the Shawnee tribe in the Midwest calling it “hotehimini kiishthwa,” both of which translate to strawberry moon.

Here are all of the full moons remaining this year and their names, according to The Old Farmer’s Almanac:

Be sure to check for the other names of these moons as well, attributed to their respective Native American tribes.

Here is what else you can look forward to in 2021:

The Delta Aquariids meteor shower is best seen from the southern tropics and will peak between July 28 and 29, when the moon is 74% full.

Interestingly, another meteor shower peaks on the same night — the Alpha Capricornids. Although this is a much weaker shower overall, it has been known to produce some bright fireballs during its peak. It will be visible for everyone regardless of which side of the equator they are on.

The Perseid meteor shower, the most popular of the year, will peak between August 11 and 12 in the Northern Hemisphere, when the moon is only 13% full.

An annular eclipse of the sun will happen on June 10, visible in northern and northeastern North America from 4:12 a.m. ET to 9:11 a.m. ET. The sun won’t be fully blocked by the moon, so be sure to wear eclipse glasses to safely view this event.

November 19 will see a partial eclipse of the moon, and skywatchers in North America and Hawaii can view it between 1 a.m. ET and 7:06 a.m. ET.

And the year will end with a total eclipse of the sun on December 4. It won’t be visible in North America, but those in the Falkland Islands, the southern tip of Africa, Antarctica and southeastern Australia will be able to spot it.

Skywatchers will have multiple opportunities to spot the planets in our sky during certain mornings and evenings throughout 2021, according to the Farmer’s Almanac planetary guide.

It’s possible to see most of these with the naked eye, with the exception of Neptune, but binoculars or a telescope will provide the best view.

Mercury will look like a bright star in the morning sky from June 27 to July 16 and October 18 to November 1. It will shine in the night sky from August 31 to September 21, and November 29 to December 31.

Venus, our closest neighbor in the solar system, will appear in the western sky at dusk in the evenings from May 24 to December 31. After the moon, it’s the second-brightest object in our sky.

Mars makes its reddish appearance in the morning sky between November 24 and December 31, and it will be visible in the evening sky through August 22.

Jupiter, the largest planet in our solar system, is the third-brightest object in our sky. It will be on display in the morning sky through August 19. Look for it in the evenings August 20 to December 31 — but it will be at its brightest from August 8 to September 2.

Saturn’s rings are only visible through a telescope, but the planet itself can still be seen with the naked eye in the mornings through August 1 and in the evenings August 2 to December 31. It will be at its brightest during the first four days of August.

Binoculars or a telescope will help you spot the greenish glow of Uranus on the mornings of May 16 to November 3 and the evenings of November 4 to December 31. It will be at its brightest between August 28 and December 31.

And our most distant neighbor in the solar system, Neptune, will be visible through a telescope in the mornings through September 13 and during the evenings September 14 to December 31. It will be at its brightest between July 19 and November 8.

When to see the total lunar eclipse and 'flower' supermoon