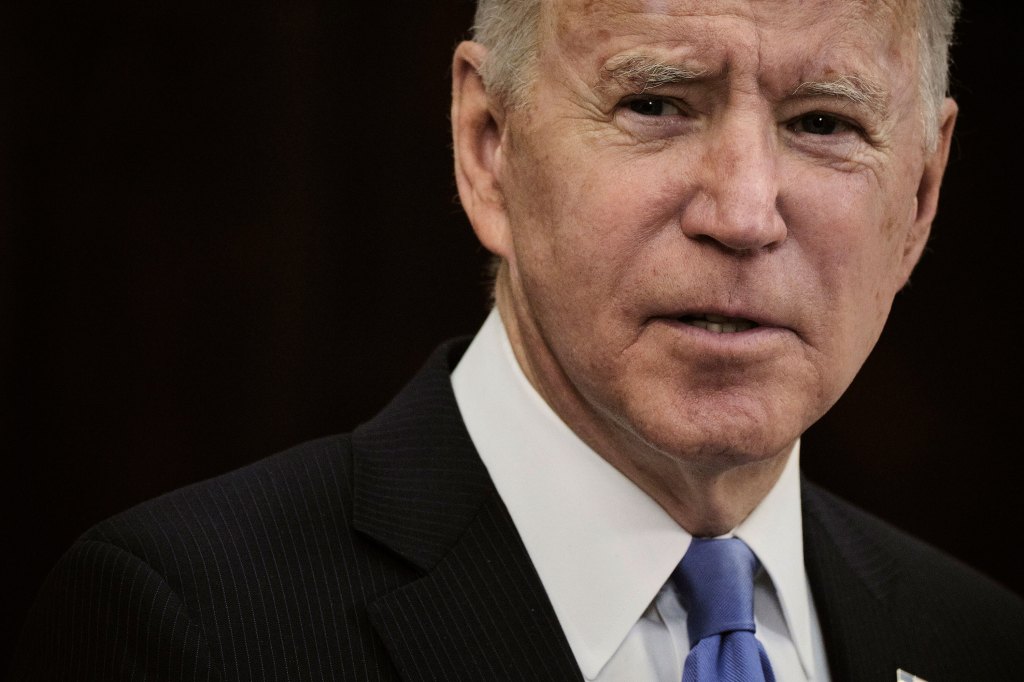 (CNN) — GOP senators say that President Joe Biden has informed them he’d be willing to accept an infrastructure package of around $1 trillion, significantly lower than the White House’s public offer last week.

Two key GOP negotiators — Sens. Shelley Moore Capito of West Virginia and Roger Wicker of Mississippi — both indicated on Tuesday that Biden has signaled openness to that price tag, a reason why they plan to make a counteroffer around that amount on Thursday, even as there are still sharp disagreements on how to pay for the massive proposal.

“The President indicated he would accept that number,” Wicker told CNN, referring to $1 trillion.

The upcoming Senate GOP offer is a sign that negotiations with the White House aren’t over yet even as talks are teetering on the edge ahead of a Memorial Day deadline. GOP negotiators met Tuesday behind closed doors, telling reporters that they planned to offer a new infrastructure proposal Thursday that will approach $1 trillion in part because they believe the two sides could find agreement there.

“He used that figure with us, yes,” Capito said when asked if Biden showed a willingness to accept a $1 trillion proposal, adding that the President also suggested a package of investments over an eight-year time frame. “We’re responding to what he proposed.”

White House press secretary Jen Psaki, during the White House briefing on Tuesday, declined to confirm whether Biden had told Republican lawmakers he was open to $1 trillion, but a senior administration official told CNN the White House would be open to that as a top-line total.

Psaki, asked by CNN if a $1 trillion proposal would represent the kind of progress Biden sought by his Memorial Day deadline, declined to weigh in definitively without full details but did signal it was a positive step:

If the two sides don’t hammer out an agreement, a growing number of Democrats say it’s time for Biden to back plans to move the proposal through the budget process, which would allow them to avoid a filibuster under Senate rules and pass the measure along straight party lines. But to do that, Democrats would need all 50 members of the Senate Democratic Caucus to sign off on the strategy — and Sen. Joe Manchin threw cold water on that approach on Tuesday.

“I don’t know why you need reconciliation,” the West Virginia Democrat said, referring to the budget process that would allow Democrats to circumvent a GOP filibuster in order to pass an infrastructure package.

Manchin also rejected calls to pull the plug on talks between the White House and Senate Republicans if no infrastructure deal materializes by Memorial Day. Echoing the position of Republicans, he said it’s a “reasonable path forward” to reallocate money from the Covid relief laws that hasn’t been spent to help pay for the infrastructure plan.

Manchin’s position underscores the delicate balancing act Democrats and the White House face as key hurdles remain in the talks with Republicans. While several Democrats have publicly urged the White House to consider moving without Republicans soon, they can’t afford to lose a single Democrat.

It’s a position that has more or less given any single Democrat — Manchin first among them — the ability to veto any move to break off talks.

“We’re not quite there yet,” Psaki said. “We’re still working with Republicans.”

Meanwhile, Sen. Mitt Romney, a moderate Republican, said Tuesday he and a small bipartisan group of members were working on the frame of a bipartisan infrastructure plan and were closer to finding a way forward to pay for it.

The group met Monday evening and has met consistently for months. It includes Democratic Sens. Manchin, Jon Tester of Montana, Jeanne Shaheen of New Hampshire and Kyrsten Sinema of Arizona as well as Republican Sens. Rob Portman of Ohio, Bill Cassidy of Louisiana and Susan Collins of Maine.

The group has been largely focused on finding ways to pay for infrastructure in recent weeks, but views itself as playing a similar role to a bipartisan group that worked together in December to break a logjam in the final Covid-19 relief talks when former President Donald Trump was still in office.

“Shelley’s done a great job — She’s put out a plan there,” Manchin said. “That’s not where the White House is and some of us want to break this logjam.”

A source familiar with the discussions told CNN that any bipartisan plan would include the $340 billion surface transportation plan that was authored by Capito and Democratic Sen. Tom Carper of Delaware, but the bipartisan plan would be broader. The group’s framework would still exclude tax hikes and focus on core infrastructure.

Romney told reporters that his group “has a list of the pay-fors that will cover the scale of our proposal.” “How each of the (pay-fors) would apply to each particular area, we haven’t finalized,” Romney said.

The Utah Republican told said lawmakers are focused on creating a fund, which could provide capital for water, electric and other infrastructure projects. Lawmakers are also looking at indexing the price of gas to inflation and charging electric vehicles for the miles they drive. The group could also use funding that was allocated in Covid relief bills, but remains unspent in the states.

The small group, however, does not represent larger swaths of the Republican and Democratic caucuses. More liberal Democrats, for example, have expressed opposition to paying for infrastructure by imposing what they view as a tax or fee on individuals who choose to drive electric cars. Many Democrats are also opposed to raising the gas tax.

The effort underscores the desire to keep pushing ahead on a bipartisan infrastructure plan even as progressives are urging the White House and Democratic leaders to walk away from the talks and focus on a Democratic-only effort.

White House officials are open to any bipartisan pathways that may present themselves but are being cautious not to undercut Capito as talks with her group continue.

Still, the scale of the divide between the two sides remains significant.

Republicans have made clear that the corporate tax increases Biden has proposed to finance his proposal are nonstarters. White House officials have countered that increased user fees as a financing mechanism are off the table. And while Republicans have also explored using portions of Covid relief funds as a potential way to pay for at least a piece of the proposal, another senior administration official said the White House doesn’t view that as a viable way to pay for the plan.

The White House counterproposal called for Republicans to significantly increase funding for agreed-upon elements that should be in the bill, including roads, bridges and major projects. It also requested that Republicans consider including key elements from the “care economy” piece of Biden’s initial proposal, which they rejected out of hand.

For now, at least, it’s clear that both sides aren’t ready to walk away from the table, despite a week of growing skepticism that progress could be made.

For days, GOP negotiators have been fuming at the White House’s $1.7 trillion proposal and weighing their options, arguing that what the White House offered Friday was far away from the President’s tenor in their private meeting earlier this month and casting doubts on whether staff and Biden are in the same place.

“He kind of moved away from us,” Capito told reporters at the Capitol on Tuesday.

Republicans have blamed White House staff for pushing for a higher number, which led to its $1.7 trillion counteroffer last week, and they contend that the President would back the lower number if he were to ignore the other voices in the room.

“If the President gets to make the decision, he will accept it,” Wicker said. “It would be the most substantial infrastructure deal enacted by the federal government.”

But senior administration officials make clear that Biden signed off on the proposal that was delivered to Republicans last week, in part as an effort to shake loose tangible movement from Republicans. Those negotiations, despite what both sides have described as goodwill in the talks, were viewed by the White House as slow moving and in need of a jolt. The proposal, which they knew wouldn’t be received kindly by Republicans, was designed to do just that, an official said.

The back-and-forth comes as lawmakers and the White House are approaching a Memorial Day deadline to make significant progress in the bipartisan talks and as Senate Democrats are laying the groundwork to go it alone if they have to.

Still unclear is whether Democratic leaders would have the backing of their caucus to move the bill without Republican support. Moderate Democrats, including Manchin, have made it clear they want the talks to play out. But progressives are losing patience, worried that letting the bipartisan talks drag out could ultimately imperil other legislative priorities that will fall to the back burner.

“The senators who publicly expressed an opposition to reconciliation two months ago need to be more clear about their patience and timeline,” said Sen. Chris Coons, a Democrat from Delaware.

Tester said that ultimately Majority Leader Chuck Schumer will have to make the final call but that he would be willing to let bipartisan talks go well into the summer.

Pushed on if he’d really let it go on that long, given the number of other items Democrats need to get to, Tester said, “I’m not the leader so I can say s*** like that.”

But even if Republicans and the White House could come to some agreement on the scope of an infrastructure package, the issue of how to pay for it remains a key sticking point. White House officials view the forthcoming GOP proposal on that front as exceedingly important in terms of what happens next.

White House officials have been waiting to see where Republicans would land in the wake of their counterproposal — and, depending on what the proposal looks like, want to have the group back to meet with Biden as soon as this week.

Biden has made clear to his top advisers that he wants to pursue a bipartisan agreement, but there has been growing skepticism inside the White House about whether Republicans can not only get to that point but also deliver at least 10 votes if they do.

While any final deal is still unlikely to be reached in the near term, the goal before the Biden-imposed Memorial Day deadline is to enter, in the words of the first senior administration official, “actual negotiations” — something multiple officials said simply hadn’t transpired to this point. Should that dynamic start to shift, it’s likely that talks will continue beyond the deadline, even if a clear path forward isn’t immediately identified, the official said.

This story and headline have been updated with additional developments on Tuesday.