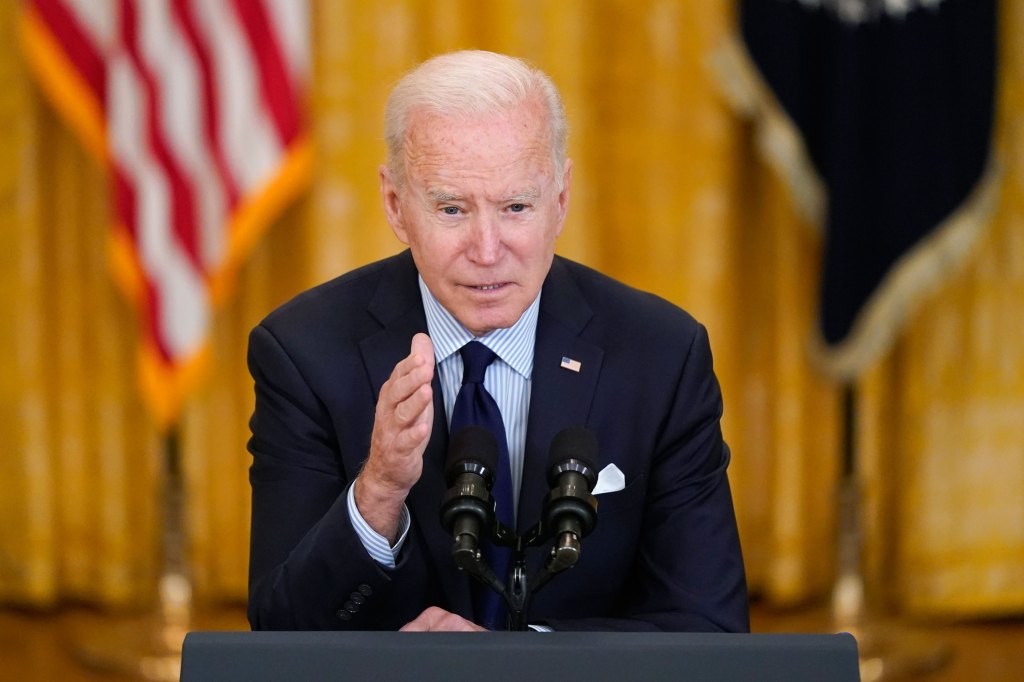 (CNN) — Republican leaders say they told President Joe Biden on Wednesday that they’re drawing a “red line” on hiking certain taxes to fund the President’s infrastructure spending proposal, an anticipated hurdle that has arisen during a crucial week for the White House’s infrastructure priorities.

The discussion between the GOP leaders and Biden took place during the President’s first bipartisan meeting with the top four members of congressional leadership at the White House.

After the meeting, McConnell and McCarthy told reporters that almost all of their hour-and-a-half meeting was about infrastructure and that they both made clear that they’re not willing to budge on the 2017 tax cuts signed into law by former President Donald Trump, calling the issue the GOP’s “red line.”

“I think that it is safe to say there is certainly a bipartisan desire to get an outcome,” McConnell said. “Clearly, Senate Republicans are not interested in revisiting the 2017 tax bill. I think the President and the vice president understand that.”

He also said individuals in the room agreed that they’d next work on how they would be defining infrastructure.

McCarthy argued that “raising taxes would be the biggest mistake you could make.”

“You won’t find any Republican that will go and raise taxes and that’s the worst thing you can do in the economy — when you are watching inflation, gas prices are going up, and it has not been this high since President Biden was vice president,” McCarthy said.

In an interview Wednesday after the meeting, Biden told MSNBC he’ll try passing aspects of his infrastructure bill without Republicans if they cannot garner bipartisan support. He said he wasn’t willing to abandon priorities like expanded child care, even if Republicans don’t want them included in an infrastructure bill.

“We’re going to fight those out. I want to know what we can agree on, and let’s see if we can get an agreement, kick start this. And then fight over what’s left and see if I can get it done without Republicans if need be,” he said in a clip thata aired on Wednesday.

He said the issue of how the infrastructure bill would be paid for did not arise, and instead centered on what should be labeled “infrastructure” — and what the two sides could agree to pass as such.

“I got into what constitutes infrastructure. And I want to make it clear: I want to get a bipartisan deal on as much as we can get a bipartisan deal on. And that means roads, bridges, broadband, infrastructure,” Biden said. “But I’m not giving up on the fact we have 2 million women not able to go back to work because all the daycare centers are closed, out of business, so they can’t go back to work. I’m not going to give up on a whole range of things that go to the question of productivity, increasing jobs, increasing employment, increasing revenues. I’m not willing to give up on that.”

The meeting came hours after Wyoming Rep. Liz Cheney lost her position in the House Republican leadership for repeatedly publicly rejecting former President Donald Trump’s lie that he won the 2020 presidential election. The House Republican Conference is expected to replace Cheney with New York Rep. Elise Stefanik, who has a less conservative voting record than Cheney but has emerged as one of Trump’s top defenders.

Wednesday’s meeting marked McConnell and McCarthy’s first time in the West Wing since Biden took office, according to an administration official. While Biden has kept up public promises to find bipartisan areas to compromise, both McConnell and McCarthy have — at least publicly — largely promised they’d do everything to stop Biden’s agenda.

That opposition has taken different forms — McCarthy voted against certifying Biden’s win in the Electoral College in the hours after the January 6 riot at the White House and McConnell has said publicly that “100% of my focus is on stopping this new administration.”

But those topics, as well as the ouster within the House Republican Conference, were not on the agenda. And following their time in the Oval Office, none of the parties had indicated those political issues were brought up. McCarthy mentioned that the group briefly discussed the violence that has erupted between Israel and Palestinians.

The meeting was “businesslike,” according to one official, with each participant getting to make their case on their views of an infrastructure bill, several exchanges on specific policy issues and what could be included in any package, but no clear pathway forward beyond continuing discussions.

“This isn’t like the last four years, and I don’t think anyone expected it would be,” the official said, in a nod to the explosive meetings between former President Donald Trump and Democratic leaders. “There wasn’t a lot of overt political talk — just a focus on where each side stood.”

The position laid out by Republicans underscored that the two sides remain far apart on a myriad of issues, the official said. There was agreement, however, that the discussions needed to continue as they sought to narrow down areas of potential agreement.

While the discussions were characterized by participants as productive — Biden said he came away from them as “encouraged” — McConnell and McCarthy made clear several times to Biden and their Democratic counterparts that the tax increases proposed by Biden were non-starters, a separate official said. Beyond that, the issue of how to pay for the proposals — by far the thorniest issue at play — wasn’t a primary focus of the discussions.

McConnell made clear that beyond the tax issue, Republicans would only agree to discuss physical infrastructure including roads, bridges and broadband. He also pressed Biden to move any potential bill through regular order in Congress — a committee process, followed by floor consideration. That exhortation comes after Biden’s massive Covid relief bill moved through Congress using reconciliation, a process that allowed it to pass with only Democratic support.

Separately, McConnell brought up concerns he’s raised publicly related to inflation and the effect of the expanded unemployment benefits on hiring, the official said.

No one at the White House was under any illusions that a deal would be struck on any major issue during the first joint meeting between Biden and the four congressional leaders, but the President saw it as an important avenue for reaching out across the aisle.

“The President has been clear from as far back as his campaign that he believes these discussions and engagements are important in and of themselves,” a senior White House official said ahead of the meeting.

Even though Wednesday’s meeting is the big ticket item this week, the White House is equally — if not more — focused on Thursday’s meeting with Sen. Shelley Moore Capito of West Virginia and other Republican senators as an avenue for progress on infrastructure.

In recent days, the White House has intensified its negotiations with members of Congress over Biden’s broad spending proposals. Members of the administration have said they have a goal of seeing real progress on infrastructure legislation by Memorial Day, which is just about two-and-a-half weeks away.

White House staff held a series of internal meetings over the weekend to prepare for this week’s meetings and have stayed in close contact with lawmakers and congressional staff on infrastructure, a White House official said.

Transportation Secretary Pete Buttigieg has worked the phones with daily calls to lawmakers to discuss the administration’s proposals, per one official. Energy Secretary Jennifer Granholm this week is courting bipartisan members of Congress, governors, and stakeholders in the labor and business sectors, another official told CNN.

Biden is meeting with several members of Congress this week to move his plans on infrastructure forward. He met with key moderates, West Virginia Democratic Sen. Joe Manchin and Arizona Democratic Sen. Kyrsten Sinema, at the White House earlier this week, as well as longtime ally Sen. Tom Carper, a Delaware Democrat who has worked with Biden for decades. Manchin and Sinema are key votes, as both Democrats oppose changing the Senate’s rules to allow legislation to pass with a simple majority instead of the required 60-vote threshold needed to end debate, which could greatly affect the size and scope of the President’s legislative agenda.