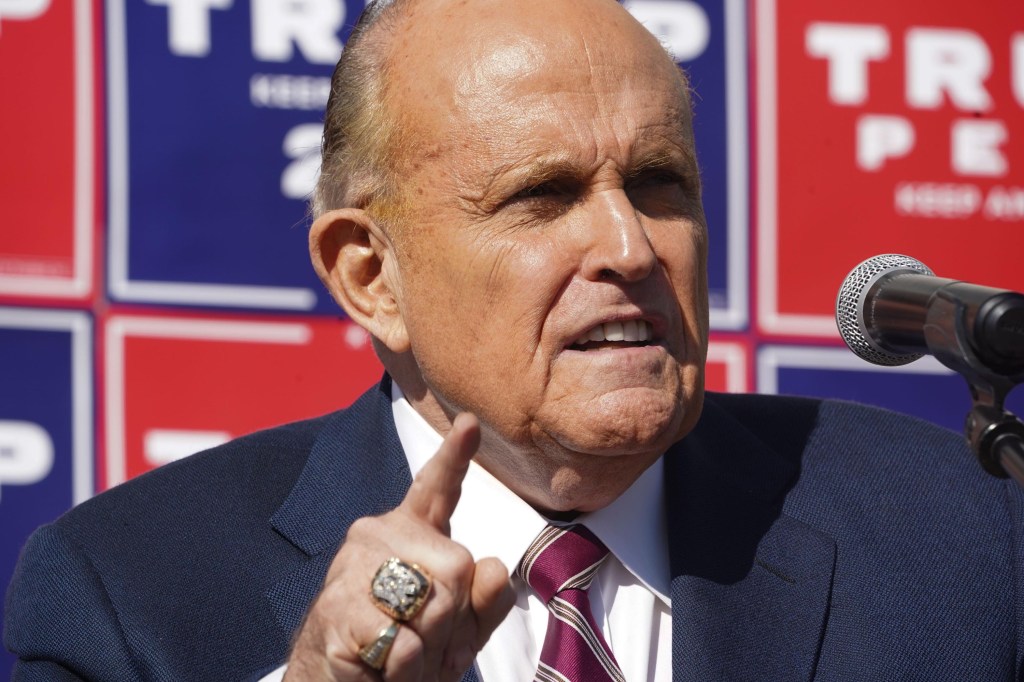 Federal agents executed search warrants Wednesday at the Manhattan apartment and office of Rudy Giuliani, his attorney said, advancing a criminal investigation by federal prosecutors that has been underway for more than two years.

Giuliani, who served as former President Donald Trump’s personal lawyer, has been the focus of an investigation concerning his activities in Ukraine, including whether he conducted illegal lobbying for Ukrainian officials while he pursued an investigation linked to Trump’s primary political rival, President Joe Biden, CNN has reported. Giuliani hasn’t been charged and has denied wrongdoing.

It is unusual for prosecutors to execute a search warrant on a lawyer, although Manhattan federal prosecutors have done so before, most notably in recent years against another former lawyer for Trump, Michael Cohen.

On Wednesday afternoon, an attorney for Giuliani, Robert Costello, said the warrant described an investigation into possible violation of foreign lobbying laws and that it sought communications between Giuliani and people including a former columnist for The Hill, John Solomon.

Costello told CNN that Zafonte also received a subpoena to appear before a grand jury next month. He said he had made two offers to the Justice Department — one two years ago and one last month — to assist in any investigation, but that the agency never issued a subpoena for any documents or requested information from any of Giuliani’s employees.

As part of the same investigation, agents on Wednesday also executed a search warrant at the home of Victoria Toensing, a lawyer and Giuliani ally, a spokesperson for Toensing said. A person briefed on the matter later clarified that the house itself wasn’t searched but that a phone was handed over when agents arrived in the 6 a.m. ET hour.

“Ms. Toensing is a former federal prosecutor and senior Justice Department official. She has always conducted herself and her law practice according to the highest legal and ethical standards,” her spokesperson said in a statement. “She would have been happy to turn over any relevant documents. All they had to do was ask. Ms. Toensing was informed that she is not a target of the investigation.”

Toensing and her husband, Joseph diGenova, signed an agreement with a Ukrainian prosecutor as part of an effort to collect information about Biden’s activities in Ukraine while he was vice president, according to the House Democrats’ 2019 impeachment report.

A spokesman for the Manhattan US Attorney’s office declined to comment. The New York Times was first to report the search.

Giuliani’s son Andrew briefly stepped outside of his father’s Manhattan apartment on Wednesday afternoon to denounce the Department of Justice, saying that if this can happen to “the former president’s lawyer, this could happen to any American.”

“This is absolutely absurd and it’s the continued politicization of the Justice Department that we have seen,” said the younger Giuliani, who worked in the Trump administration and is weighing a run for governor of New York.

“All I will say is this: To all Americans out there, our Justice Department should be independent on politics. Enough is enough, ladies and gentlemen,” he continued. “We cannot stand for this anymore.”

White House senior adviser Cedric Richmond on Wednesday declined to comment on the raid, telling CNN’s Wolf Blitzer on “The Situation Room” that the Department of Justice was acting “completely independent” from the White House.

“This President has said that he wanted the Justice Department to be completely independent. They are,” Richmond said. “And so we don’t interfere with them, and we don’t comment on what they do. We are very mindful that the people in this country have to have full trust in the Department of Justice, and the President is not going to put his thumb on the scale or comment about any investigation, and the investigations should just take their course without political interference.”

On Thursday morning, Trump defended Giuliani as a “patriot who loves this country,” telling told Fox Business’ Maria Bartiromo, “I don’t know what they’re looking for.”

Warrant would have required senior authorization

A search warrant for a lawyer like Giuliani would require sign-off by the highest levels of the Department of Justice, likely by Deputy Attorney General Lisa Monaco or the acting deputy attorney general who served prior to her confirmation, according to departmental guidelines.

The Times reported that investigators seized Giuliani’s electronic devices, according to one person with knowledge of the matter.

The New York federal prosecutors leading the investigation into Giuliani have previously sought a search warrant for him, raising the prospect last year of seeking one for his communications, but they were met at the time with resistance from Justice Department officials in Washington over the strength of their evidence, CNN has previously reported.

Then-Deputy Attorney General Jeffrey Rosen, along with other officials at Justice headquarters and the US attorney’s office in Manhattan, decided not to make a final decision, CNN reported, in part because there would soon be a change in the administration.

Attorney-client communications are generally protected as confidential and sifted out by a special filter team of prosecutors following a search, and sometimes they are reviewed independently by a federal judge.

After Cohen’s home, office and hotel room were raided in 2018, he went to court to slow down the investigation and demand a judge’s review. Ultimately, a judge determined that Cohen had a small amount of privileged records.

One attorney who worked with Giuliani on the attempt to overturn Trump’s 2020 election loss said Wednesday that the search of the President’s lawyer may have swept up privileged legal communications about the President’s campaign from November and December 2020 and January 2021.

“Putting aside press conferences at the wrong Four Seasons, Rudy was intimately involved in the legal strategy,” said Bruce Marks, a Philadelphia-based private practice lawyer. “His devices, as far as I know, would have emails that would absolutely be privileged, including emails I sent to Mayor Giuliani as co-counsel to the Trump campaign.”

Giuliani has been under scrutiny by Manhattan federal prosecutors since early 2019. The inquiry has explored whether Giuliani may have been engaged in undisclosed foreign lobbying for Ukrainian officials when he sought the ouster of the US ambassador to Ukraine as well as an investigation into the Bidens for his own personal benefit at the same time he was pursuing those efforts as Trump’s attorney.

In 2019, two Giuliani associates, Lev Parnas and Igor Fruman, were indicted on campaign finance charges stemming from an alleged straw donor scheme. Parnas and Fruman met with Giuliani, helping introduce him to Ukrainian officials. They have pleaded not guilty.

Giuliani is also facing other legal exposure for his role in the 2020 election. The election technology company Dominon sued Giuliani in January for defamation after he spread baseless conspiracy theories about election fraud on his podcast and during TV appearances. In the lawsuit, the company focused on how Giuliani continued to claim without evidence that Dominion aided election fraud even after he received a cease-and-desist letter. Guiliani said at the time he would “investigate a countersuit against” Dominion.

Guiliani is also likely to face scrutiny from Fulton County District Attorney Fani Willis, who is investigating Trump’s efforts to influence Georgia’s election results. While the crux of Willis’ investigation is Trump’s efforts to meddle in the state’s election, she is also examining Trump allies who may have assisted him in those efforts. One area Willis is exploring: whether Giuliani may have violated the law by making false statements about voting in Georgia in front of the state legislature, according to a person familiar with the investigation.

This story has been updated with additional information.