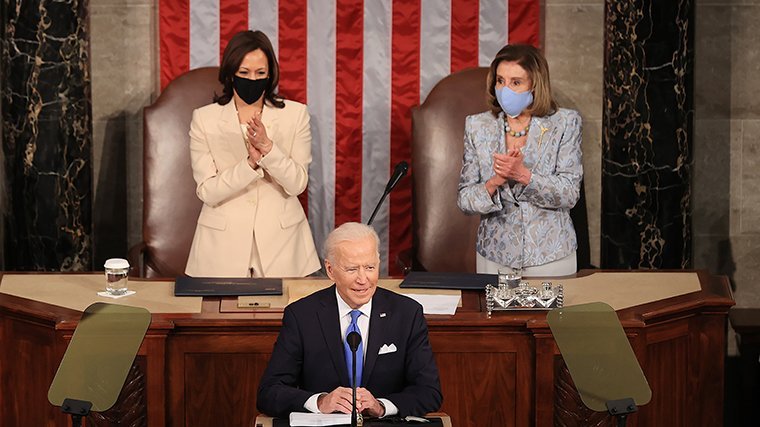 President Joe Biden, addressing a joint session of Congress on Wednesday night for the first time, called for America to overcome division as he spoke in the building that was overrun during a violent insurrection months before.

And he sought to build on the trust he engendered by accelerating the nation’s response to the Covid-19 pandemic to convince Americans that they should back his ambitious plans to tackle income inequality.

Biden marked the accomplishments of his first 100 days in a strong position despite the deeply polarized nature of the American electorate after four chaotic and tumultuous years under former President Donald Trump. A new CNN poll released Wednesday showed that 53% of Americans approve of the way Biden is doing his job, and nearly 6 in 10 Americans believe that he is keeping his campaign promises.

In his remarks, Biden reminded his audience of the crises he inherited — from the once-in-a-lifetime pandemic to the failed insurrection at the US Capitol on January 6, which was fomented by his predecessor. He argued that America is emerging from “the worst economic crisis since the Great Depression” and “the worst attack on our democracy since the Civil War.”

For the first time in history, there were two women — Vice President Kamala Harris and House Speaker Nancy Pelosi — standing behind the president.

Asked about the significance of the moment during an interview on MSNBC on Wednesday, Pelosi replied, “It’s about time.” Harris echoed that sentiment on her way into the House chamber Wednesday night: “Normal,” she told Capitol reporters when asked how Americans should view the historical milestone.

Biden, in these early months of his presidency, has been bolstered by voters’ perceptions of efforts to ease the nation out of the upheaval and economic strife caused by the coronavirus pandemic, with some 66% of Americans approving his handling of the crisis as he looks to highlight his team’s accomplishments in administering 200 million shots in less than 100 days and the number of Covid-19 cases and deaths continues to drop.

“Go get vaccinated America,” Biden said, adding that 90% of Americans now live within five miles of a vaccination site and everyone 16 years and older can get the shot.

He noted that grandparents are now able to hug their grandchildren and that senior deaths are down 80% since January. He called the progress of the last 100 days toward eradicating the pandemic “one of the greatest logistical achievements this country has ever seen.”

The President is looking to use that goodwill to persuade voters to join him in his effort to reshape the economic fortunes of working- and middle-class Americans through a massive $4 trillion proposal to both repair the nation’s roads, bridges and railroads and expand broadband, while directing $1.8 trillion toward the “American Families Plan” that he outlined Wednesday night.

A senior administration official said the proposal — a combination of about $1 trillion in investments and $800 billion in tax credits — amounted to “generational investments” in the future. The President argued Wednesday night that it will benefit families across America by helping with child care costs and family leave and by providing free community college for two years, in a proposal that would require states to pick up some of the costs.

The President introduced his new plan as a “blue-collar blueprint to build America.” He spoke directly to Americans who “feel left behind and forgotten in an economy that’s rapidly changing,” emphasizing that 90% of the infrastructure jobs that would be created through his plan don’t require a college degree.

Biden made his case for his infrastructure plan by describing jobs modernizing roads, bridges and highways and replacing all of the nation’s lead pipes and service lines to ensure that “every child can turn on the faucet and be certain to drink clean water.” He noted that the plan would make huge investments in broadband to bring high-speed internet to 35% of rural Americans who still don’t have it. All of those investments, he said, would strengthen America’s position around the world.

“We’re in competition with China and other countries to win the 21st Century,” the President said. And he said politicians have failed for too long to use the most important word when it comes to meeting the climate crisis: “jobs.”

“There is simply no reason why the blades for wind turbines can’t be built in Pittsburgh instead of Beijing. No reason,” Biden said.

One huge focus of the package is improving the care of the elderly and people with disabilities, in part by raising the salaries of the workers who take care of those Americans. Biden will finance the package by raising taxes on the rich, in keeping with his campaign promise not to raise taxes on any family making less than $400,000 a year. But there are steep hurdles ahead for his plan. Republicans and even some moderate Democrats have balked at its cost, and Biden has yet to show that he can build bipartisan consensus on his legislative priorities as he promised during the 2020 campaign.

West Virginia Sen. Joe Manchin, a moderate Democrat who has been the chamber’s key swing vote, told CNN’s Manu Raju on Wednesday that he was “very uncomfortable” with the price of Biden’s proposals, but said that he had yet to review them in detail.

In a prebuttal to the President’s speech, Senate Minority Leader Mitch McConnell said Biden had pledged bipartisanship during his campaign but has instead pushed a progressive agenda.

“The American people elected a 50-50 Senate, a closely divided House and a President who preached moderation,” the Kentucky Republican said on the Senate floor Wednesday morning. “He promised that his whole soul was committed to uniting our people. Many hoped his administration would reflect that promise, but the first hundred days have left much to be desired.”

While Biden’s economic plans was a focus of his speech, he also address the many challenges confronting his administration, including the impassioned calls for federal police reform legislation following the death of George Floyd, who was killed by a former Minneapolis police officer last May, and the crisis at the southern border with Mexico.

The President called gun violence an “epidemic in America,” and asked for a ban on so-called ghost guns.

He urged Congress to have the “courage” to craft a compromise on police reform by the anniversary of Floyd’s death next month. Trying to bridge the political divide on the issue, he said the vast majority of law enforcement officers serve American communities honorably and want to answer the calls for justice.

“We have all seen the knee of injustice on the neck of Black America,” Biden said. “Now is our opportunity to make real progress. … We have to come together to rebuild trust between law enforcement and the people they serve; to root out systemic racism in our criminal justice system.”

Republicans see the surge in unaccompanied minors across the border as a potentially powerful campaign issue in the 2022 midterm races. Biden addressed the issue head-on Wednesday night, calling on Congress to craft legislation that would create a pathway to citizenship for some 11 million undocumented immigrants.

He advocated for legal status for the so-called Dreamers, who were brought to the United States as children, and called on Congress to “end our exhausting war over immigration.”

“For more than 30 years, politicians have talked about immigration reform and done nothing about it. It’s time to fix it,” he said.

One of Biden’s most difficult tasks in the months ahead will be to persuade those people who did not vote for him to get the vaccine — or to find the right messengers to help convince them.

The pace of vaccinations has slowed considerably, with supply outstripping demand, particularly in rural and conservative counties that Trump won in 2020. Scientists say between 70% and 85% of Americans will need to be vaccinated in order for the nation to achieve herd immunity and prevent dangerous coronavirus variants from spreading in the months ahead. But polls have shown persistent resistance and uninterest in getting the vaccine among a high number of Republicans.

About 43% of the population has now received at least one dose of vaccine, according to data from the US Centers for Disease Control and Prevention, and nearly 30% is fully vaccinated.

Alluding to how Americans’ faith in government was shaken during Trump’s tenure and the election that ousted him, Biden will say that in the first 100 days his administration has acted to “restore the people’s faith in democracy to deliver.”

“We’re vaccinating the nation. We’re creating hundreds of thousands of jobs,” Biden said. “We’re delivering real results people can see and feel in their own lives.”