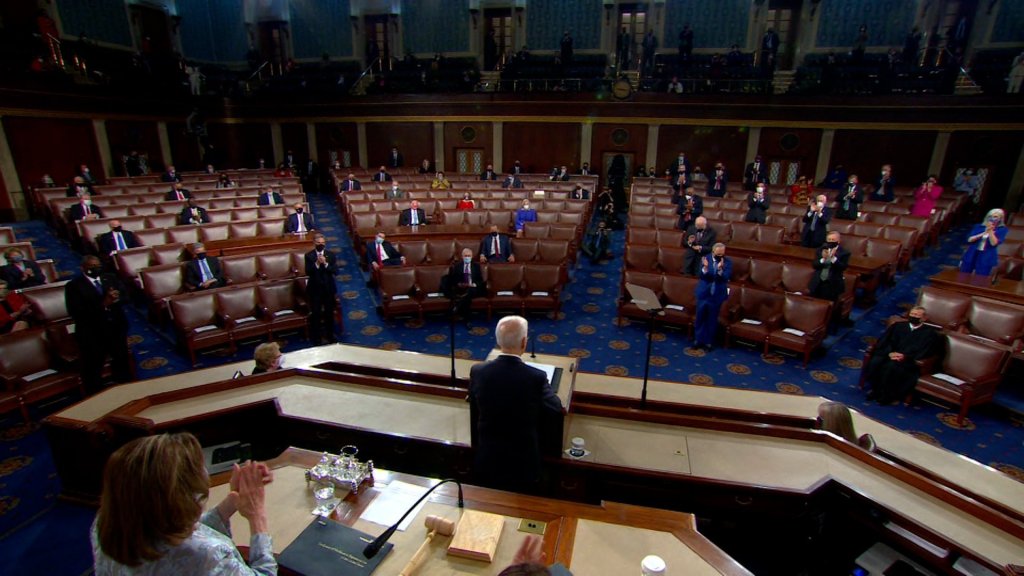 President Joe Biden made a sweeping case Wednesday for massive new programs that would transform the government’s role in Americans’ lives, claiming the very future of the country is at stake in his first address to Congress.

Coming later than usual, on the eve of his 100th day in office, Biden delivered his speech amid swirling health and economic crises he has spent his term combating.

But his message went beyond simply ridding the country of coronavirus or getting Americans back to work. In Biden’s telling, the results of those efforts could determine whether American Democracy survives at all: a live-or-die proposition that escalated his calls for trillions of dollars in new spending into an existential question for his audience of lawmakers.

His speech was laden with symbolism, from its scaled-down audience to the historic pair of women sitting behind him. It was a speech decades in the making for a president who has waited longer than most to be introduced with the familiar call: “Madam Speaker, the President of the United States.”

A long wait ended — and Biden wants to move fast

For more than 40 years — and after two failed presidential bids — Biden watched as the House Sergeant at Arms announced another president into the House chamber for speeches to Congress. He sat dutifully behind President Barack Obama for eight years, bantering with a succession of House speakers in the spot reserved for the number two.

On Wednesday, it was Biden’s name in lights on the marquee — a testament to an extraordinary degree of political patience that few politicians can rival.

“It’s good to be back,” he declared as he opened his remarks.

Yet if anything, Biden’s speech reflected a distinct impatience, now that he is in office, to wait long to see his agenda passed. He made no apologies for passing a $1.9 trillion stimulus without Republican support in the first weeks of his presidency, insisted it was urgently needed. And he urged lawmakers to rapidly take up the next bills, declaring it a matter of imminent national consequence.

“We are at a great inflection point in history. We have to do more than just build back better,” he said.

“We welcome ideas,” he added later of his willingness to work across the aisle. “So, let’s get to work. I wanted to lay out to Congress my plan before we got into the deep discussion. I’d like to meet with those who have ideas that are different. We welcome ideas. But the rest of the world isn’t waiting for us. I just want to be clear: from my perspective, doing nothing is not an option. Look, we can’t be so busy competing with one another and forget the competition we have with the rest of the world to win the 21st century.”

Biden and his advisers recognize his window for accomplishing major things is narrow. In fact, he called on Congress to pass the George Floyd Justice in Policing Act by the one-year anniversary of Floyd’s death next month. Biden called on Congress to come together, pointing to the ongoing discussions between Democrats and Republican Sen. Tim Scott, the GOP pick to respond to Biden’s address.

The pandemic has heightened Americans’ desire for government aid. And like most presidents he is enjoying a post-inauguration polling honeymoon.

But largely because of the vaccination effort Biden has overseen, the pandemic is waning. And any number of summertime troubles — a continued surge of migrants, unrest around policing, high gas prices — could see his popularity wane. And that is before the congressional election cycle begins in earnest, when Republicans will likely be even less willing to cooperate. Historical patterns aren’t kind to first-term presidents at their first midterms.

Biden, who has been waiting decades to make the speech he delivered Wednesday, made clear he could not wait while the moment slipped past.

“I stand here tonight before you in a new and vital hour in the life of our democracy and our nation,” Biden said as he neared closing. “And I can say with absolute confidence: I have never been more confident or more optimistic about America.”

If there was one argument animating Biden’s speech — and his entire presidency to date — is that more government, when working right, can improve Americans’ lives. It’s a simple proposition that bucks a decades-long trend in both parties toward a smaller, less interventionist Washington.

“We have to prove democracy still works. That our government still works — and can deliver for the people. In our first 100 days together, we have acted to restore the people’s faith in our democracy to deliver,” Biden said in his speech. “We’re vaccinating the nation. We’re creating hundreds of thousands of jobs. We’re delivering real results people can see and feel in their own lives.”

It’s a distant cry from President Bill Clinton’s declaration in his 1996 State of the Union that “the era of big government is over.” Speaking from the same podium 25 years later, Biden seemed to argue the exact opposite: that now is the time for big government to return — and with it the chance to prove that it’s still working.

“Scientific breakthroughs took us to the Moon and now to Mars, discovered vaccines, and gave us the Internet and so much more,” he said. “These are the investments we make together, as one country, and that only government’s in a position to make.”

The theme isn’t new for Biden. But never before has it been more clearly distilled than when he laid out his legislative accomplishments so far, and the plans he still hopes to pass. In total, Biden is pressing for almost $6 trillion in new spending — including the $1.8 trillion plan he proposed Wednesday shoring up education, child care and paid family leave — a massive bet on government’s ability to solve the most intractable problems.

Biden has on his side a generational health crisis and its incumbent economic meltdown that have altered Americans’ views of what their government can do for them. But he’s also benefited from shifting views on longer-term issues like climate change and criminal justice reform, which will require government intervention to produce the types of results more Americans are asking for.

Polls, including a CNN survey conducted by SSRS, show a majority of Americans approve of Biden’s job performance at this stage in his presidency. But they also show some appetite for Biden’s expansive view of government. An NBC News poll found 55% of Americans said government “should do more to solve problems” compared to 41% who said it’s doing too much.

Covid is impossible to ignore

There was little question the coronavirus pandemic would occupy a major part of Biden’s speech. It’s the single greatest challenge he faces and the issue he and his advisers believe will make or break his presidency.

But even had Biden said nothing about the pandemic, the scenery on Wednesday provided a constant reminder of the ongoing crisis. Gone was the familiar packed-in crowd of lawmakers. There were no guests to point to in the first lady’s box. And the two women sitting behind Biden were both wearing masks.

The contrast with past years felt strange. The many empty seats caused the usual din of applause to feel more like the polite clapping at small theater, with individual lawmakers’ murmurs and clapping able to be heard during the traditional entrances before the speech.

Biden’s message was one of distinct optimism about the trajectory of the pandemic, hoping to provide a high-profile boost in the national spirit after a year of lockdowns and tragedy.

“Our progress these past 100 days against one of the worst pandemics in history is one of the greatest logistical achievements our country has ever seen,” he said.

But his remarks also laid bare the lingering concerns within the administration about Americans who aren’t rushing to get vaccinated. In a worst case scenario, administration health officials fear the country won’t be able to achieve widespread immunity if enough people decide not to get a shot.

Whether Biden’s entreaties on Wednesday make any difference remain to be seen. He’s been encouraging eligible populations to get vaccinated for months. And even he has acknowledged the still-hesitant groups aren’t likely to listen to him.

“Go get vaccinated,” he pleaded from the podium. “They’re available now.”

Addresses to Congress are about more than just the address. What is usually the most-watched televised speech of the year is also laden with visual symbols, no more so than this year.

If the most glaring symbol was the pandemic-altered room, the most historic was the tableau behind Biden: for the first time, two women were seated in the spots reserved for the vice president and House speaker.

Kamala Harris and Nancy Pelosi, both Californians from the Bay Area, are not strangers to one another. And there was little question the historic weight of the moment wasn’t lost on either of them.

“To have two women behind him as he speaks is cause for a lot of excitement,” Pelosi said ahead of the address. “I’ve been getting calls from — globally — about that they can’t wait to see.”

The sparsely-filled House chamber also served to illustrate the fresh memory of the January 6 riot, where would-be insurrectionists sought to prevent Biden from becoming president. Fallout from the moment still lingers as enhanced security surrounds the Capitol.

In his speech, Biden made reference to the event.

“As we gather here tonight, the images of a violent mob assaulting this Capitol — desecrating our democracy — remain vivid in our minds. Lives were put at risk. Lives were lost. Extraordinary courage was summoned,” Biden said. “The insurrection was an existential crisis — a test of whether our democracy could survive. It did.”

A case to the world

Biden’s primary focus in his early days — and his primary audience for Wednesday’s address — is Americans.

But he has made no secret that his efforts at home are also meant to signal to the world — and specifically to China — that perceptions of the United States’ decline are mistaken.

He has framed his entire agenda as a battle between democracy and autocracy. And he believes passing major pieces of legislation are signals to the world that democracy will win out.

“The autocrats will not win the future,” Biden said as he concluded his speech. “America will.”

Speaking off-script about Xi Jinping, his Chinese counterpart, Biden said, “He’s deadly earnest about becoming the most significant, consequential nation in the world.”

Foreign policy is usually a secondary topic in any State of the Union — “It’s never as much foreign policy as the foreign policy team wants,” Biden’s press secretary Jen Psaki said this week — and Wednesday wasn’t an exception.

He referenced his decision to withdraw US troops from Afghanistan by September 11, competition with China, the nuclear programs in Iran and North Korea and relations with Russia.

But even if national security wasn’t at the heart of the speech, Biden would likely argue it was there in more existential form.

“I’ve often said that our greatest strength is the power of our example — not just the example of our power. And in my conversations with world leaders — many I’ve known for a long time — the comment I hear most often is: we see that America is back — but for how long?” he said.

“My fellow Americans,” he went on, “we have to show not just that we are back, but that we are here to stay.”