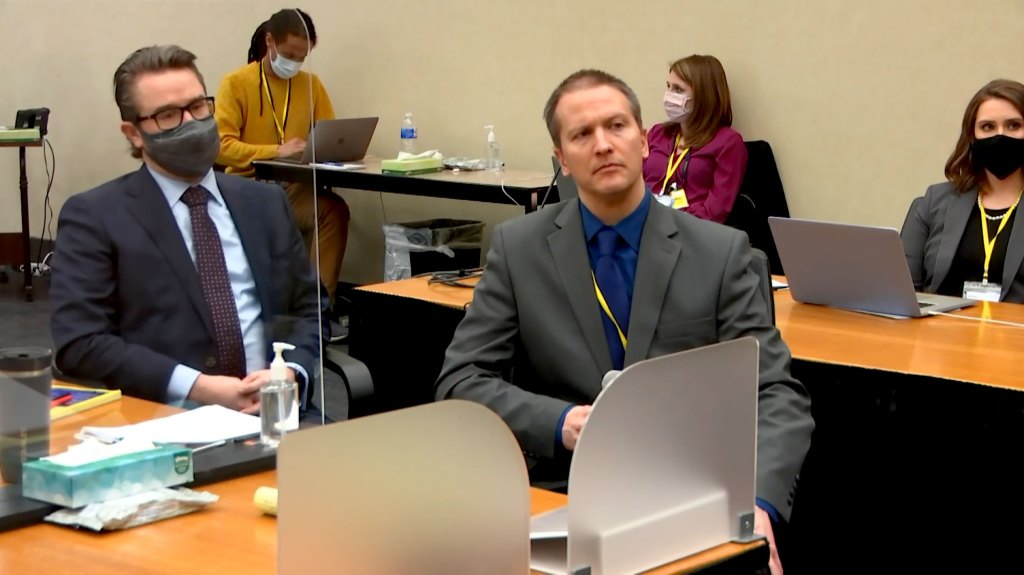 The jury in the trial of former Minneapolis Police Officer Derek Chauvin concluded its first day of deliberations Monday, according to the Hennepin County Court.

Deliberations began at 4 p.m. CT and ended at 8 p.m. Jurors are being sequestered during deliberations and will spend tonight in a hotel.

The court did not say when the 12-juror panel is expected to resume deliberating Tuesday morning.

The first day of deliberations follows closing arguments where the prosecuting attorney said Chauvin kneeled on George Floyd’s neck and back for 9 minutes and 29 seconds because of his pride and his ego in the face of concerned bystanders.

“He was not going to let these bystanders tell him what to do. He was going to do what he wanted, how he wanted, for as long as he wanted. And there was nothing, nothing they can do about it because he had the authority. He had the power, and the other officers, the bystanders were powerless,” prosecuting attorney Steve Schleicher said. “He was trying to win, and George Floyd paid for it with his life.”

The comments about Chauvin’s pride and ego were the first time prosecutors have specifically discussed Chauvin’s mindset when Floyd died on May 25, 2020 — elements that are key to the charges of second-degree unintentional murder, third-degree murder and second-degree manslaughter against him.

In response, defense attorney Eric Nelson said Chauvin acted as a “reasonable officer” would in that situation and said there was no evidence he intentionally or purposefully used force that was unlawful.

“You have to look at it from the reasonable police officer standard. You have to take into account that officers are human beings, capable of making mistakes in highly stressful situations,” Nelson said. “In this case, the totality of the circumstances that were known to a reasonable police officer in the precise moment the force was used demonstrates that this was an authorized use of force, as unattractive as it may be. This is reasonable doubt.”

Prosecuting attorney Jerry Blackwell then delivered a rebuttal rejecting the defense’s claim that Floyd died because of an enlarged heart.

“The reason George Floyd is dead is because Mr. Chauvin’s heart is too small,” he said.

Judge Peter Cahill instructed jurors on the law before and after closing arguments, and sent them off outside the courtroom just after 5 p.m. ET. The jury will remain sequestered for deliberations and will stay in a hotel at night.

During the trial, prosecutors called 38 witnesses to testify, including police use-of-force experts who criticized Chauvin and medical experts who explained how Floyd died. The defense called seven witnesses of its own — but not Chauvin himself, as he invoked his Fifth Amendment right not to testify.

The end of the trial comes 11 months after Floyd’s death on a Minneapolis street set off widespread protests about how police treat Black people.

No matter this trial’s verdict, the broader issue shows no signs of lessening. Last week, just miles away from the courthouse, a Brooklyn Center police officer was charged with manslaughter after she fatally shot 20-year-old Daunte Wright during a traffic stop.

Tensions are high throughout the region as protesters began gathering outside of the courthouse in Minneapolis and the police department’s new third precinct. The original precinct was destroyed during demonstrations last year.

“Thank you to everyone who is peacefully making their voices heard,” OSN’s tweet read.

Tech companies have also taken action online. Facebook issued a statement Monday saying the platform will remove content about the verdict that violates its community standards. The platform has also designated Minneapolis a temporary “high-risk location.”

“We will allow people to discuss, critique and criticize the trial and the attorneys involved,” said Monika Bickert, Facebook’s vice president of content policy. “Our teams are working around the clock to look for potential threats both on and off of Facebook and Instagram so we can protect peaceful protests and limit content that could lead to civil unrest or violence.”

Authorities have ramped up security around Minneapolis. The Hennepin County Government Center has been surrounded by fencing and barricades since jury selection began in March. This past week, crews installed razor wire around some police buildings, and National Guard troops have been deployed in parts of downtown Minneapolis.

Gov. Tim Walz requested additional law enforcement assistance from Ohio and Nebraska in advance of the verdict, according to a press release from his office on Monday.

In his closing argument, Schleicher spoke for an hour and 43 minutes as he sought to prove that Chauvin used excessive and unreasonable force and caused Floyd’s death.

He contrasted Chauvin’s “ego-based pride” with the proper feelings of pride in wearing a police badge and praised policing as a noble profession. He insisted the state was prosecuting Chauvin individually — not policing in general.

Schleicher’s closing argument relied on a series of video clips that showed Chauvin’s actions that day, linking them explicitly to the language of each charge.

“George Floyd’s final words on May 25, 2020, were, ‘Please, I can’t breathe,’ and he said those words to Derek Chauvin,” Schleicher told the jurors. “All that was required was a little compassion, and none was shown on that day.”

Schleicher told jurors to reject defense theories and look at what they know happened.

“You need to focus on what did happen. George Floyd was not a threat, he never was. He was not resisting. He was just not able to comply. They should have recognized that,” he said. “The defendant was on top of him, stayed on top of him, grinding, his knees into him. Pressing down on him, continuing to twist his arm twisting. up against the handcuffs. A pain compliance technique without the opportunity to comply,” he added.

At the end, Schleicher simplified the case into a concise argument: “Believe your eyes.”

Nelson’s case to acquit Chauvin has been to argue that his use of force was appropriate, that he was distracted by the crowd of hostile bystanders and that Floyd died due to fentanyl and methamphetamine use, his resistance of officers and his underlying health issues.

He said the prosecution’s focus on 9 minutes and 29 seconds, rather than Floyd’s active resistance in the minutes earlier, was inappropriate.

“It’s not the proper analysis because the 9 minutes and 29 seconds ignores the previous 16 minutes and 59 seconds. It completely disregards it,” he said. “Human behavior is unpredictable, and nobody knows it better than a police officer.”

Nelson argued Chauvin had no intent to use unlawful force and that he followed his training.

During the restraint, he said, the bystanders were in their own crisis and made the scene unsafe for Chauvin to render aid and care for Floyd. At the same time that Floyd took his last breath, Chauvin pulled out his mace to keep the crowd back and an off-duty firefighter walked up to the scene from behind, startling him, Nelson said.

“All of these facts and circumstances simultaneously occur at a critical moment. That changed officer Chauvin’s perception of what was happening,” he said.

Nelson highlighted Floyd’s use of fentanyl and methamphetamine and his heart issues, and he expressed incredulity that the prosecution’s doctors dismissed those as a cause in his death.

“I would submit to you that it is nonsense that none of these other factors had any role. That is not reasonable,” he said.

He spoke for about two and a half hours before Judge Cahill forced him to pause so that the jury could have lunch. A pool reporter inside the court noted that the jury appeared to be getting antsy, with several rubbing their eyes and fidgeting. After the break, Nelson spoke for about 15 minutes more.

In Blackwell’s rebuttal, he took issue with the defense saying there were two sides to every story.

“There really aren’t two sides to the story on whether this force is unreasonable,” he said.

He noted that, legally, prosecutors did not have to prove that Chauvin’s actions were the only cause of death — just that they were a substantial causal factor in Floyd’s death.

Further, he defended the crowd of bystanders, referring to them as a “bouquet of humanity” who came together to try to help a stranger who was suffering. They were in anguish, Blackwell said, torn between their respect for the police and their concern for Floyd’s life, but they did not physically intervene.

“They respect this badge, even if it tore them up inside,” he said.

45 witnesses over 3 weeks of testimony

The prosecution’s case fit into three distinct phases with 38 witnesses: what happened to Floyd last May, the Minneapolis Police use-of-force policy and the medical analysis of why Floyd died.

The first week of testimony largely focused on Floyd’s final moments and the distressed bystanders who watched Chauvin kneel on Floyd while he was handcuffed and prone on the street. Video from the bystanders and police body camera footage showed Floyd’s gasps for air and calls for his “mama” over those excruciating minutes, leaving several witnesses in tears.

Next, a series of police supervisors and use-of-force experts criticized Chauvin’s actions as excessive and unreasonable. They said he violated policies around de-escalation, objectively reasonable use of force and the requirement to render aid. Foremost among the critics was Minneapolis Police Chief Medaria Arradondo.

The medical testimony, particularly from Dr. Martin Tobin, laid out the mechanics of how Floyd died. The renowned pulmonary critical care doctor testified that Floyd died from a “low level of oxygen” when Chauvin pinned him to the street and restricted his ability to breathe — what’s known as positional asphyxia.

In contrast, the former Minneapolis police officer’s defense team called seven witnesses — but Chauvin was not among them.

A police use-of-force expert testified that Chauvin’s restraint of Floyd was “justified,” and a forensic pathologist testified that Floyd’s cause of death was “undetermined,” saying his underlying heart issues were the main causes.

Several other defense witnesses have testified about Floyd’s drug use, particularly during a prior arrest in May 2019 in which he ingested opioids as police approached him in a vehicle.

Together, the witnesses furthered the defense’s three main arguments in the case: that Floyd died due to drug and health problems, that Chauvin’s use of force was ugly but appropriate, and that a hostile crowd of bystanders distracted Chauvin.