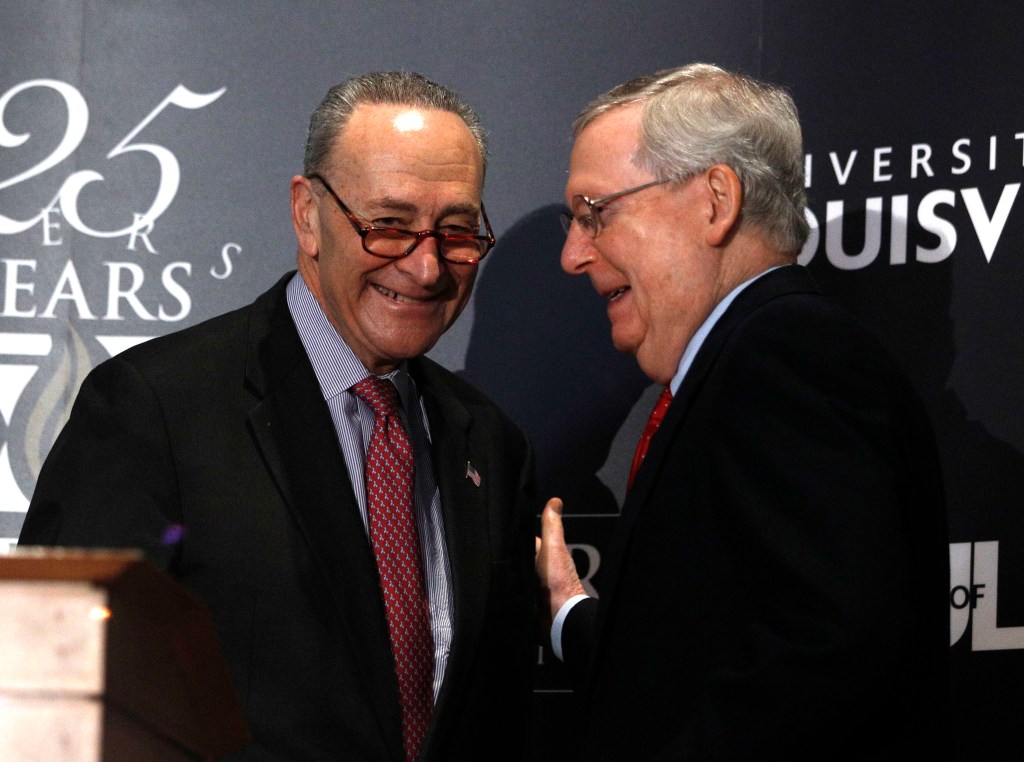 Major items on President Joe Biden’s domestic agenda hang in the balance this month, hinging on Republicans’ willingness to cut deals and whether Democrats agree to pare back their ambitions at the risk of causing a backlash on the left.

April is turning out to be a crucial month to fulfill Biden’s campaign pledge to work on a bipartisan basis in Washington, with groups of senators holding both informal and formal talks on a range of issues — infrastructure, gun violence, a crackdown on China, police reform, the minimum wage and immigration policy.

But finding a delicate compromise — that could muster 60 votes in the Senate and win backing in the narrowly divided House — remains a far more complicated question, with distrust between the two parties running high and lawmakers often dug in on their ideological positions. And Republicans are still smarting from the White House’s handling of Covid relief talks, arguing Biden jammed through a partisan $1.9 trillion proposal and used short-lived discussions with Republicans to create an appearance that he and Democrats actively sought bipartisan support.

“If somebody tells you in their inaugural speech they’re for bipartisanship, and they go out and do everything but, it doesn’t engender trust,” said Sen. Bill Cassidy, a Louisiana Republican who says he’s been invited to a White House meeting on infrastructure next week.

All of which means this: Biden could see much of his agenda falter if bipartisan talks collapse, forcing Democrats to try to go it alone under budget rules that allow them to pass legislation in the Senate with just 51 votes rather than the 60 needed to overcome a filibuster. Yet going that route would significantly limit the scope of their agenda, since big-ticket items on immigration and gun violence are unlikely to meet the strict requirements under Senate budget rules to advance bills on a simple majority basis, though an infrastructure package could pass the test.

Plus Democrats lack enough support within their own caucus to eliminate the filibuster’s 60-vote threshold altogether, putting even more pressure to find a bipartisan way forward in the next several weeks or risk seeing chunks of the Biden agenda falter in the narrowly divided Congress.

“This month is our opportunity to show that we can actually legislate in a bipartisan way,” said Sen. Chris Coons, a Democrat who occupies Biden’s old US Senate seat in Delaware.

Yet liberals are eager to see results and say that if bipartisan talks peter out, Democrats must achieve their goals by whatever means necessary — including potentially using the budget process up to six times in this Congress — with or without GOP support.

“Whether it’s one piece of legislation or six pieces of legislation, is a less concern to me as to whether it goes done,” Senate Budget Committee Chairman Bernie Sanders, an independent from Vermont. “What matters is it gets done and we can address the crises facing working families.”

On some major issues, such as voting rights, there are no serious bipartisan talks occurring. It’s a sign that a sweeping Democratic proposal to increase voting access and overhaul the election process is almost certain to be blocked by Republicans as soon as next month.

At a closed-door lunch on Tuesday, Senate Majority Leader Chuck Schumer told his caucus that he would give time for bipartisan talks to play out — but that Democrats would go a different route if negotiations stall, attendees said.

“Schumer also cautioned that Senate Dems do not have the luxury of time,” a person in the room said.

Behind the scenes, bipartisan talks are beginning to pick up pace on some key issues.

Sens. Richard Blumenthal and Chris Murphy, two Connecticut Democrats, have been quietly working the phones to court Republicans to see if there’s any support on gun violence legislation that could garner 60 votes in the Senate. Democrats hope this month will yield progress before trying to bring a bill to the floor next month, though they’ll need the backing of 10 Republicans to do that.

Between the two Democrats, they’ve spoken to roughly half the 50-member Senate GOP Conference. They readily acknowledge that they will have to pare back the House-passed bill that would mandate background checks on firearm sales on commercial and private transactions, given the stiff opposition from GOP senators and skepticism from moderate Democrats to requiring checks on private transfers.

Yet, it’s still a tall order to cut a deal even on a narrow measure — such as forcing all gun purchasers through the internet and at gun shows to undergo background checks, similar to a long-stalled proposal by Sens. Joe Manchin of West Virginia, a Democrat, and Pat Toomey of Pennsylvania, a Republican.

Still, senators are discussing ways to bolster the background check system, while seeking to find consensus on proposals to empower states and local authorities to remove firearms from those deemed mentally ill — known as red-flag laws.

And while both Murphy and Blumenthal say they’re more optimistic than before that a deal could be reached in the weeks ahead, they plainly recognize the challenges ahead.

Blumenthal said talks are going “better than I would have expected, much more productively than any other time.” But he added: “Realistically, it’s still very much an uphill effort, in part because Republicans are so spooked right now by Donald Trump and his base and the complete irrationality, almost paranoia, of that base when it comes to guns, the slippery slope becomes a cliff. If they take one step, it’s like the world ends.”

Murphy said he’s spent recent weeks “cajoling” his Republican colleagues to support anti-gun violence legislation, and says he’s ready to compromise on “something that’s less than what the House passed.”

But what that bipartisan plan looks like remains unclear.

Indiana Sen. Mike Braun, a Republican who spoke with Murphy, said the focus should be on “keeping guns out of the hands of the mentally ill.”

But Braun said focusing on expanding background checks first means “you’re starting in the wrong place” and called on senators to instead “first focus on why some laws aren’t working.”

Sen. Marco Rubio, a Florida Republican, said: “These people would pass background checks, which is why I proposed the red flag grants to incentivize more states,” a reference to grants to state and local governments that implement laws that allow the temporary removal of guns from people deemed at high risk of harming themselves or others.

And the distrust looms large.

Senate Minority Whip John Thune of South Dakota was skeptical when asked if there’d be an appetite for a bipartisan deal on background checks.

“Most of the proposals the Dems come up with have something to do with making it harder for law-abiding citizens to get access to firearms,” Thune told CNN.

Amid the attention around the Derek Chauvin trial on charges of murdering George Floyd last year in Minneapolis, the White House has shifted its focus to getting legislation through Congress, abandoning a Biden campaign pledge to create a commission on the issue. After the House passed a bill in March named after Floyd, without a single Republican supporter, there are now active conversations about a bipartisan Senate version of a police reform bill.

Those involved in the bipartisan discussions include Rep. Karen Bass, a California Democrat and lead author of the House bill, Democratic Sen. Cory Booker of New Jersey and Republican Sen. Tim Scott of South Carolina, whose version of police reform was blocked by a Democratic filibuster last summer.

Scott told CNN this week that he and Bass had just spoken, adding he believed progress was being made since they first started their conversations in recent weeks. Bass told CNN in March the group was working through “some of the thorny issues” in their discussions over a potential Senate bill.

One of the thorniest issues is how to deal with the issue of qualified immunity, which protects police officers from civil litigation. Democrats have pushed to gut the protections, a proposal that Republicans have resisted. But Scott indicated that the sticking point could be resolved.

In order to overcome the Senate’s 60-vote threshold, there needs to be a bipartisan consensus in the 50-50 Senate since most bills are unlikely to meet the strict rules of budget reconciliation, a process that allows legislation to pass on a simple majority basis and that was employed to enact the sweeping Covid relief law with no Republican support.

The Senate’s parliamentarian, Elizabeth MacDonough, gave Democrats a boost last week when she ruled that it’s possible to use that process multiple times per fiscal year, meaning it could be employed six times in the current Congress — an unprecedented move.

Schumer says he has not made a decision to go that route yet, as the White House has sought to engage Republicans on a potential bipartisan way forward on its $2 trillion-plus infrastructure-and-tax package.

Yet in order for an infrastructure bill to pass the House by July 4, as House Speaker Nancy Pelosi has said she wants, Democratic leaders must make a decision soon about which route they want to pursue: A narrow bill that could win over Republicans, or a more sweeping measure that they could pass through the reconciliation process.

On Wednesday, Schumer refused to say when he’d make that decision. But he made clear he wouldn’t let talks drag out.

“We’re not going to repeat the mistake of 2009 and ’10 where for a year-and-a-half they negotiated and then nothing came of it,” Schumer said on CNN’s “New Day,” referring to the first two years under then-President Barack Obama when Democrats controlled all of Congress. “We’re not doing that.”

But going the reconciliation route has its limits. For instance, MacDonough ruled this year that increasing the federal minimum wage to $15 per hour is outside the bounds of the budget reconciliation process, dealing a blow to progressive Democrats.

The ruling prompted bipartisan talks over the issue, with GOP Sen. Mitt Romney of Utah and Democratic Sen. Kyrsten Sinema of Arizona putting together a middle-ground proposal to pitch to a group of 20 senators from both parties who are trying to craft compromises for the Senate to consider.

And Manchin and some other moderate Democrats have resisted calls to use the reconciliation process on an infrastructure package, even though the prospects for a bipartisan deal seem slim — as Republicans reject Biden’s call to hike corporate taxes to help pay for the plan and seek a proposal with a much lower price tag.

Manchin said bipartisan deals will happen, “but it might not happen at the scope some people want it to happen. You can’t do every social agenda and every pent-up issue that you might have.”

But asked what he’d do if the bipartisan talks fall apart, Manchin demurred.

“You just work a little harder until you massage it and make it happen,” Manchin told CNN.