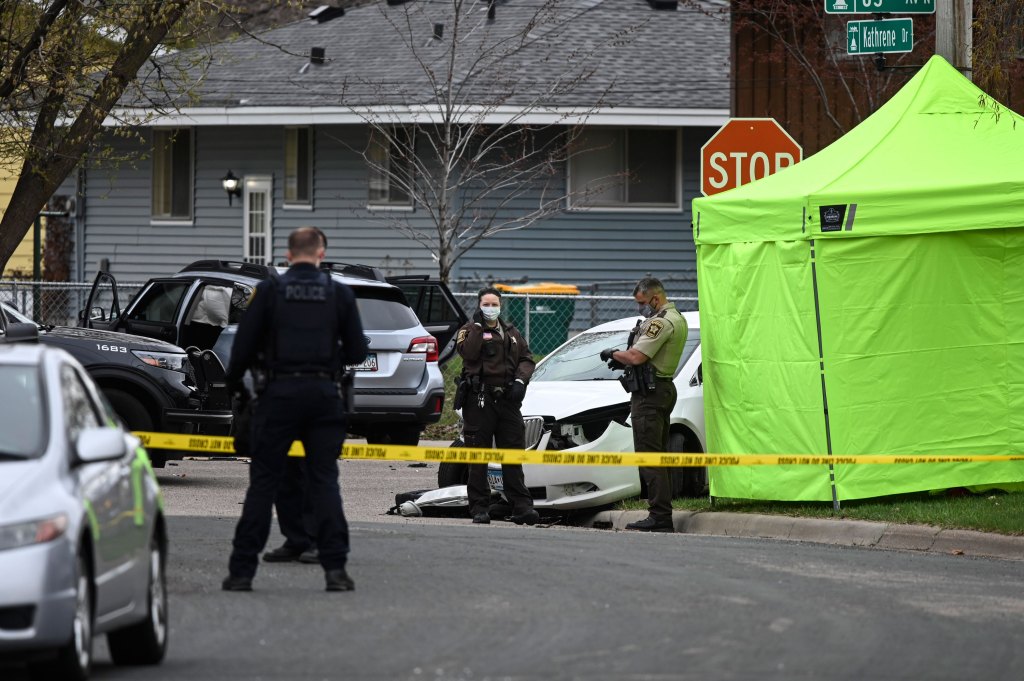 A suburban Minneapolis police officer grabbed her gun instead of her Taser during an arrest and fired a shot that killed a 20-year-old unarmed Black man in what authorities said was an “accidental” shooting.

The details and body-worn camera footage were released Monday by police in Brooklyn Center, Minnesota, providing an account of what happened as officers tried to detain Daunte Wright on Sunday following a traffic stop but ended up shooting him.

The officer who shot and killed Wright was identified Monday night as Officer Kim Potter, according to a news release from the Minnesota Bureau of Criminal Apprehension (BCA).

Potter has been with Brooklyn Center police department for 26 years, according to the BCA.

For a second consecutive night, a crowd gathered outside the Brooklyn Center police headquarters and people were “launching bottles, fireworks, bricks and other projectiles at public safety officials,” according to a tweet from Operation Safety Net (OSN), a joint effort of local entities to ensure the safety of the public during the trial of Derek Chauvin.

“They are also trying to shine lasers into officers’ and troopers’ eyes,” the tweet says.

The mayor of Brooklyn Center, the suburb where Wright was killed, told CNN’s Don Lemon that he understood that people were angry but he was calling for protesters to go home.

Mayor Mike Elliot said that a regional command was directing law enforcement efforts and not him.

The goal is “right now is to try and disperse the crowd and get people to get home,” he said.

Earlier he called the shooting “unfathomable” and “heartbreaking” as a jury in nearby Minneapolis considers the fate of Derek Chauvin, the officer charged with killing George Floyd, whose death sparked a summer of unrest last year.

President Joe Biden called for “peace and calm” as authorities in Minneapolis and St. Paul declared emergencies and curfews ahead of expected unrest. The counties of Hennepin — which includes Brooklyn Center — Anoka, Ramsey and Dakota were under curfew, which many protesters ignored.

The town’s police chief, Tim Gannon, said earlier that his release of the video was for the sake of transparency and that the BCA doesn’t condone the release of video in ongoing investigations.

Gannon said the portion of body-worn camera footage released Monday led him to believe the shooting was accidental and that the officer’s actions before the shooting were consistent with the department’s training on Tasers.

“As I watched the video and listened to the officer’s commands, it is my belief that the officer had the intention to deploy their Taser, but instead shot Mr. Wright with a single bullet,” Gannon said. “This appears to me, from what I’ve viewed and the officer’s reaction and distress immediately after, that this was an accidental discharge that resulted in the tragic death of Mr. Wright.”

The video shows three officers on a traffic stop, but the only video released was a minute-long clip from the officer who fired her weapon.

Gannon said she has been placed on administrative leave.

“I felt the community needed to know what happened. They needed to see it. I needed to be transparent. And I want to be forthright,” Gannon said.

It’s common, though not always required, for police agencies to turn over shooting investigations to outside agencies to avoid appearance of conflict of interest.

Gannon said he asked BCA to investigate and present its findings, “independent of me,” to authorities and attorneys to review the case.

A spokesperson for the US Department of Justice said the shooting was a local matter and that the department is not involved in the investigation. The district attorney for Hennepin County said it sent the case to a different county to avoid an “appearance of a conflict of interest.”

“As Minneapolis and the rest of the country continue to deal with the tragic killing of George Floyd, now we must also mourn the loss of this young man and father,” he said.

Details of the encounter

Wright was with his girlfriend Sunday afternoon, driving to his older brother’s house, when police pulled him over in the Minneapolis suburb for an expired tag, police said. Officers learned he had an outstanding warrant and attempted to handcuff him while he was standing outside his car.

Wright’s older brother, Damik Bryant, told CNN he texted Wright moments before the shooting, asking what was taking him so long. Wright sent another text saying he was pulled over and asked for insurance information, Bryant said. Bryant told him to call their mother.

“They asked him to step out the car, and you know his first instinct was, ‘What did I do, what’s wrong?’ And they were like, ‘Well, put the phone down, get out the car now, we’ll talk to you about it when you get out,'” Bryant said.

“He said they pulled him over because he had air fresheners hanging from the rearview mirror,” Wright’s mother, Katie Wright, told CNN affiliate WCCO. “I heard the police officer come to the window and say, ‘Put the phone down and get out of the car,’ and Daunte said, ‘Why?’ And he said, ‘We’ll explain to you when you get out of the car,'” Katie Wright told CNN affiliate KARE.

In the body-worn camera footage released Monday, an officer tells Wright “don’t” as Wright twisted away from an officer to get back into the car. Gannon said it appeared from the video that Wright was trying to leave.

The officer whose camera footage was released is heard warning the man she’s going to use her Taser on him, before repeatedly shouting, “Taser! Taser! Taser!”

Then, the officer is heard screaming, “Holy sh*t! I just shot him.”

The video stopped moments later. Gannon said the shooting appeared to be “an accidental discharge that resulted in the tragic death of Mr. Wright.” He said the conduct of the officer who shot Wright — shouting “Taser” three times to alert officers nearby she was about to fire her Taser — was consistent with their training.

The shooting happened about 10 miles from where Chauvin, a former Minneapolis police officer is on trial for the killing of another Black man, George Floyd.

As news of Wright’s death spread Sunday night, hundreds of people protested. Gannon told reporters that an officer was hit in the head with an item thrown by protesters, who used frozen cans of pop and pieces of broken stone.

As anger over Wright’s death grew Sunday night, before it was known that the shooting appeared accidental, aerial footage from KARE showed several police cars around the Brooklyn Center crash site swarmed by crowds. The video showed people trying to damage police cars.

After nightfall, a crowd gathered around the police department, CNN crews on scene reported. Officers held a line outside of the department, with some officers positioned on top of the building.

Harrington said there were reports of people throwing rocks and other objects at the police building. There were also reports of shots fired in the area, he said.