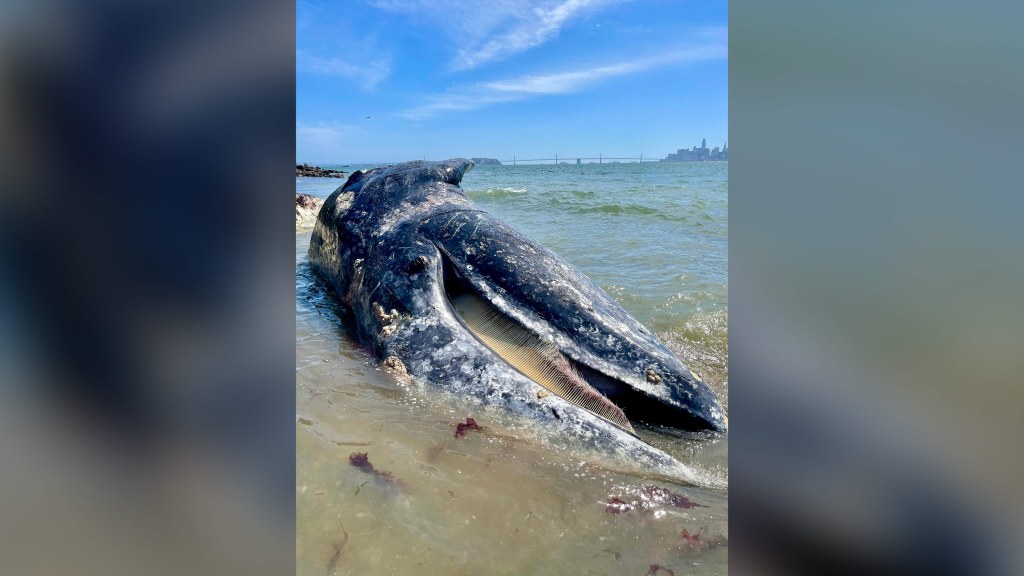 Gray whales are visible just twice a year in California as they migrate from the southern tip of the West Coast up toward Alaska and back again. They delight residents as they appear briefly in coastal waters before returning to the open ocean.

This spring, though, they’ve been washing up dead.

The carcasses of four gray whales have been found around the San Francisco Bay Area in eight days — an alarming string of deaths that constitutes an unusual mortality event, defined by the National Oceanic and Atmospheric Administration (NOAA) as a significant die-off of a marine species.

Marine researchers don’t know the reason for the spate of whale deaths, the most recent of which occurred Thursday. But they’re committed to finding answers, even as the pandemic impacts the efficiency with which they can conduct their research, said Dr. Jeff Boehm, a veterinarian and CEO of the non-profit Marine Mammal Center, the world’s largest veterinary facility marine mammal.

“Four dead gray whales in eight days is nothing short of alarming to us,” he said of the staff’s veterinary team and researchers, who’ve performed necropsies on the whales to determine their cause of death.

Though they’re not endangered, the gray whale’s population is declining quickly: 1 in 4 gray whales has died since the last population assessment in 2016, according to NOAA. The agency, along with the Marine Mammal Center and the California Academy of Sciences, is working to find the cause of that decline before the gray whales are no longer a biannual visitor to California.

Whales die due to ship strikes, malnutrition and entanglement

The whale, a 41-foot female, found Thursday at nearby Muir Beach died from a ship strike, Boehm said, adding its injuries included bruising and internal hemorrhaging. Another whale that died last week is suspected to have died from a boat strike, too, but the other two whales’ causes of deaths are unknown.

Malnutrition is likely tied to climate change, Boehm said. The whales travel north toward the Arctic in the spring, where the waters are typically rich with the invertebrates that the bottom-feeding whales favor. But if water temperatures are rising, then the foods they feed on may no longer make their home in Arctic waters, leaving the whales hungry for the next few months, when they don’t feed often as they migrate.

Anecdotally, Boehm said he’s seen a “resurgence” in shipping recently after the pandemic slowed down international commerce. More data is needed to determine how or if the ships factor into the unusual mortality event, though, he said.

A similar die-off happened in 2019

A similar die-off occurred in 2019, when Boehm said three gray whales were found dead in one week. Nearly halfway through that year, 69 whales had been found dead in the US and 147 whales had died overall.

That unusual mortality event was linked to malnutrition, likely due to under-consuming during their summer feeding season in the Arctic, according to NOAA.

It’s unknown whether 2021 will see a similar die-off, or if the most recent series of deaths is related to the 2019 unusual mortality event, Boehm said. The pandemic has stunted the Marine Mammal Center’s typical robust research projects, Boehm said, as teams must adhere Covid-19 safety measures while working. But the recent events are disturbingly similar to the 2019 events, he said.

“Four in eight days is just a bit more extreme to me,” he said.

Teams are continuing to study gray whales out in the field, and take note of how the whales coexist with the vessels that share the Bay Area’s waters. They monitor things like ship traffic and the speed at which the ships travel, but also the condition that the whales are in to begin with, in case ships alone are not the answer to the recent die-off.

San Francisco loves the whales that travel by twice a year, Boehm said.

“What a remarkable thing to have, an urban center like the San Francisco Bay Area, with all of its economic might and this significant population center, right alongside waters that are teeming with wildlife,” he said.

When the gray whale population suffers, so do the rest of the marine ecosystems of the Bay Area, Boehm said. It’s crucial, then, that marine biologists find answers to the most recent unusual mortality event and, more importantly, create long-term solutions.