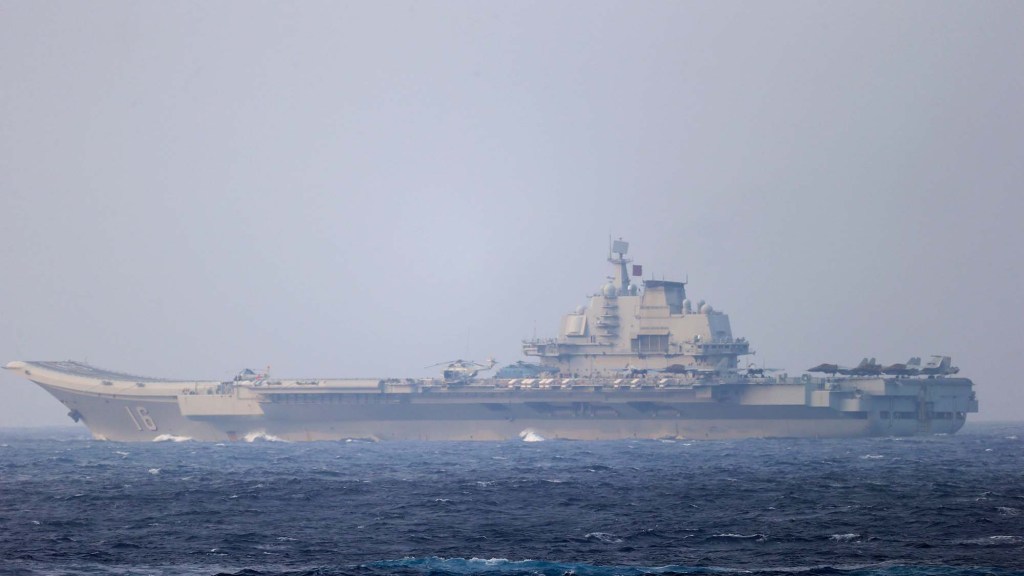 China flanks Taiwan with military exercises in air and sea

China’s armed forces conducted simultaneous military exercises to the west and east of Taiwan on Monday in a move analysts said was a warning to the self-ruled island and its supporter, the United States.

The Chinese aircraft carrier Liaoning and its escorts were conducting maneuvers around Taiwan, China’s military said in a statement Monday.

“It was a routine training exercise organized according to the annual work plan to test the troops’ training effectiveness and beef up their capability to safeguard national sovereignty, security and development interests,” the statement said.

The US Federal Aviation Administration defines an ADIZ as “a designated area of airspace over land or water within which a country requires the immediate and positive identification, location, and air traffic control of aircraft in the interest of the country’s national security.”

Taiwan’s Defense Ministry said it had a “full grasp” of the situation and was “appropriately handling” the matter, Reuters reported.

The PLA kept up its pressure on Taiwan on Wednesday, sending 15 warplanes into the island’s ADIZ, the Defense Ministry said.

For it’s part, the US Navy showed its flag around the island on Wednesday as the guided-missile destroyer USS John S McCain steamed through the Taiwan Strait, the waterway that separates the island from mainland China.

“The ship’s transit through the Taiwan Strait demonstrates the US commitment to a free and open Indo-Pacific,” US Navy 7th Fleet spokesperson Lt. Mark Langford said in a statement.

Beijing claims full sovereignty over Taiwan, a democracy of almost 24 million people located off the southeastern coast of mainland China, even though the two sides have been governed separately for more than seven decades.

Chinese President Xi Jinping has vowed that Beijing will never allow the island to become formally independent and has refused to rule out the use of force, if necessary, to take the island back.

Tensions over Taiwan have been heating up in recent months as Taipei has garnered support from the US in the form of new military hardware, an agreement between the US and Taiwanese coast guards, and strong statements of support from the administration of US President Joe Biden.

“We have, of course, taken note with great concern the pattern of ongoing PRC efforts and attempts to intimidate in the region, including in the context of Taiwan,” he said.

“The United States maintains the capacity to resist any resort to force or other forms of coercion that would jeopardize the security or the social or economic system of the people on Taiwan,” Price told reporters at the State Department.

Last month, after talks with Japanese leaders and diplomats, US Secretary of State Antony Blinken warned that Washington and Tokyo were prepared to push back against Chinese threats to stability and order in Asia.

“We will push back if necessary when China uses coercion or aggression to get its way.”

A ‘warning’ from Beijing

“The exercise showed that the PLA (People’s Liberation Army) is capable of surrounding the island of Taiwan, isolating its troops and leaving them nowhere to run and no chance to win if circumstances arise,” Shi said.

The exercises also sent a message to both the US and Japan, Shi added. Since any US and Japanese military interventions would likely come from the east, China, by exercising its carrier group there, demonstrated it could cut off that help, Shi said.

Western analysts said China did not demonstrate any new capabilities in Monday’s exercises.

In fact, a Chinese carrier in the open Pacific could play to one of the strengths of the US Navy — its nuclear-powered attack submarines (SSN), said Thomas Shugart, a senior fellow at the Center for a New American Security and former US Navy captain.

“A Chinese carrier operating east of Taiwan is not particularly valuable being used like that, as it could be quite vulnerable operating that far out — in SSN-infested deep water and beyond China’s integrated air defense/SAM umbrella,” Shugart said.

But the Chinese military did make a political statement, analysts said.

“It’s intended as a warning to the Taiwanese and others who Beijing deemed as undermining its interests, not least the Americans,” said Collin Koh, research fellow at the S. Rajaratnam School of International Studies in Singapore.

Koh points out that a PLA Navy carrier group has operated east of Taiwan at least twice before.

And the presence of large numbers of PLA aircraft in Taiwan’s ADIZ is becoming more common.

In late March, 20 PLA warplanes entered Taiwan’s ADIZ in one day, according to Taiwan’s Defense Ministry. It’s the highest number since last year, when Taiwan began disclosing almost daily flights by Chinese aircraft into its airspace.

Such Chinese activity is expected to continue. The PLA said in its statement that carrier operations such as the one staged Monday would occur on a regular basis.

While the Chinese carrier was conducting exercises off Taiwan, a US Navy aircraft carrier strike group was carrying out its own operations in the South China Sea.

The US 7th Fleet said the USS Theodore Roosevelt and its escorts entered the South China Sea on Sunday for routine operations, the second such visit of the Roosevelt to the area this year.

“It is great to be back in the South China Sea to reassure our allies and partners that we remain committed to freedom of the seas,” Rear Adm. Doug Verissimo, commander, Carrier Strike Group Nine, said in a statement.

Beijing claims almost all of the 1.3 million square mile South China Sea as its sovereign territory and in recent years has built up military fortifications on several islands.

It says the presence of foreign military forces like the US aircraft carrier strike group are fomenting tensions in the region.

China flanks Taiwan with military exercises in air and sea