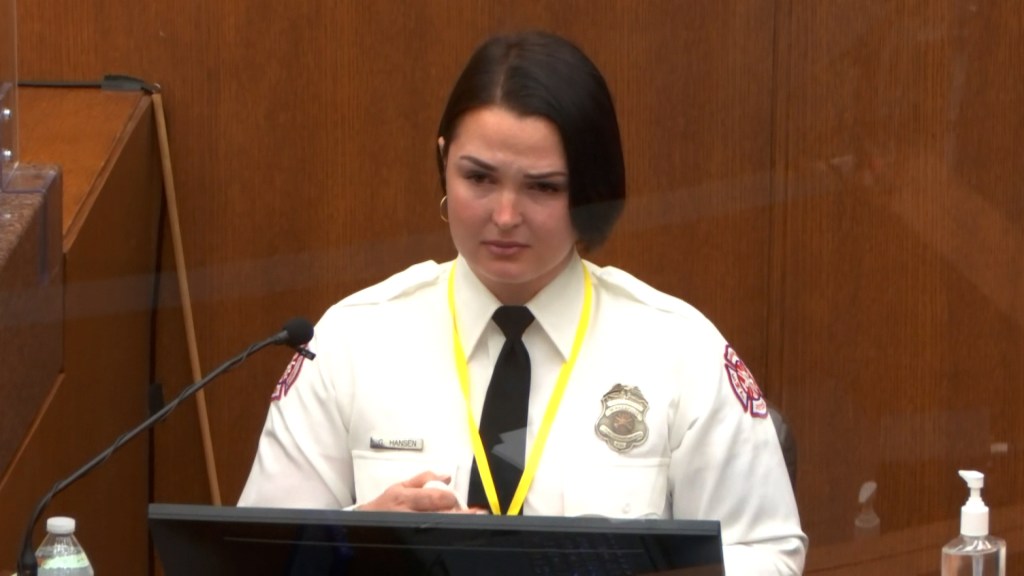 Moments after George Floyd was taken away in an ambulance last May, former Minneapolis Police officer Derek Chauvin was confronted by a witness who took issue with Chauvin’s kneeling on Floyd’s neck.

“That’s one person’s opinion,” Chauvin responded as he got into his squad car. “We had to control this guy because he’s a sizable guy. It looks like he’s probably on something.”

The short clip from Chauvin’s own body camera, played in his criminal trial Wednesday, represents the first time the public has heard the ex-officer’s perspective in the 10 months since Floyd died under his knee, launching a worldwide protest movement.

Charles McMillian, the 61-year-old witness, testified that he observed Floyd’s arrest on May 25, 2020, and that he encouraged Floyd to comply with police, repeatedly saying, “you can’t win.” As Chauvin knelt on Floyd’s neck and Floyd cried out for help, McMillian can be heard on video telling police to “get your knee off his neck.”

After Floyd’s limp body was taken away, McMillian had a short conversation with Chauvin because “what I watched was wrong,” he said.

The third day of Chauvin’s trial featured testimony from several bystanders who interacted with Floyd as well as graphic excerpts of police body camera footage showing his arrest and final moments. In the videos, Floyd gasps that he’s claustrophobic, repeatedly says he can’t breathe and calls for his mother.

Much of the searing body camera video has previously been released to the public, but its raw power for those in the court remained apparent. After a clip was played for McMillian, he broke down in tears on the stand, leading to a short break.

“I feel helpless,” he said. “I don’t have a mama either. I understand him.”

In the afternoon, with Minneapolis Police Lt. James Jeffrey Rugel on the stand, prosecutors played previously unseen footage from Chauvin’s body camera. His body camera fell underneath the squad car as Floyd went to the ground during the arrest, so the video does not show Chauvin on Floyd’s neck.

Prosecutors have called several bystanders to describe their horror and fear at watching Floyd die last May. Their testimony furthers the prosecution’s opening statement that asked jurors to focus on video of the 9 minutes and 29 seconds that Chauvin knelt on Floyd’s neck.

Defense attorney Eric Nelson has argued that the case is more complicated than just the video. He said Chauvin was following his police use of force training and argued Floyd’s cause of death was a combination of drug use and preexisting health issues.

A number of witnesses have expressed survivor’s guilt about what they did and didn’t do leading up to Floyd’s death.

An employee at the Minneapolis corner store who suspected Floyd gave him a counterfeit $20 bill last May testified in court Wednesday that he felt “disbelief and guilt” knowing that their interaction led to Floyd’s death under Chauvin’s knee.

“If I would have just not taken the bill, this could have been avoided,” Christopher Martin, a 19-year-old cashier at Cup Foods, testified in court Wednesday. He stopped working there soon after because he said he didn’t feel safe.

Similarly, on Tuesday, a high schooler who recorded and shared video of Chauvin kneeling on Floyd said she had lost sleep thinking of what else she could have done.

“It’s been nights I’ve stayed up apologizing to George Floyd for not doing more and not physically interacting and not saving his life,” she said. “But it’s not what I should have done, it’s what he should have done.”

Martin testified that Floyd responded slowly and appeared to be high when he came into the store on May 25, 2020. Surveillance video played in court shows Floyd fiddling with items in his pockets and casually interacting with other customers and employees.

Floyd then bought a pack of cigarettes with a $20 bill that Martin believed to be fake because of its blue color and texture. After examining the bill closely, Martin told his manager, who twice told Martin and other employees to go out to Floyd’s vehicle and bring him back into the store to resolve the issue.

When Floyd did not do so, the manager told an employee to call police — a fateful call that ultimately ended with Chauvin kneeling on Floyd’s neck.

Martin filmed Floyd under Chauvin’s knee but deleted the video from his phone that night. “I just didn’t want to have to show it to anyone or be questioned about it,” he said.

Christopher Belfrey, who came to Cup Foods to pick up food, testified that he saw officers walk up to Floyd’s vehicle and point a gun into the window. From inside his car, he filmed police handcuffing Floyd and later bringing him to a sidewalk.

“I didn’t know exactly what was going on. I didn’t want to be in the middle of so much commotion,” Belfrey testified. He said for that reason he moved his vehicle.

Wednesday’s testimony began with a short cross-examination of Genevieve Hansen, an off-duty Minneapolis firefighter. She testified a day earlier that she was out for a walk on her day off last May and came upon Floyd struggling to breathe and appearing unconscious under Chauvin’s knee.

She tried to help Floyd and repeatedly asked police to check for a pulse, but they refused, leaving her feeling desperate and helpless.

“I tried calm reasoning, I tried to be assertive, I pled and was desperate,” she testified. “I was desperate to give help.”

Hansen became combative with Nelson, the defense attorney, during Tuesday’s cross-examination, repeatedly taking issue with his questioning and responding with snark. “I don’t know if you’ve ever seen someone die in front of you, but it’s very upsetting,” she said at one point.

After dismissing the jury for the day, Judge Peter Cahill admonished Hansen, telling her to answer questions and stop arguing. Upon her return to the stand on Wednesday morning, Nelson asked just one question to confirm that she did not show the officers on the scene her ID.

Nelson argued in opening statements that the bystanders morphed into a threatening crowd, which distracted the officers from doing their job. In cross-examinations of Hansen and MMA fighter Donald Williams II on Tuesday, he tried to get them to admit that they and the crowd were angry as Floyd slowly died. They insisted they were increasingly desperate, helpless and concerned.

“I grew professional. I stayed in my body,” Williams said. “You can’t paint me out to be angry.”