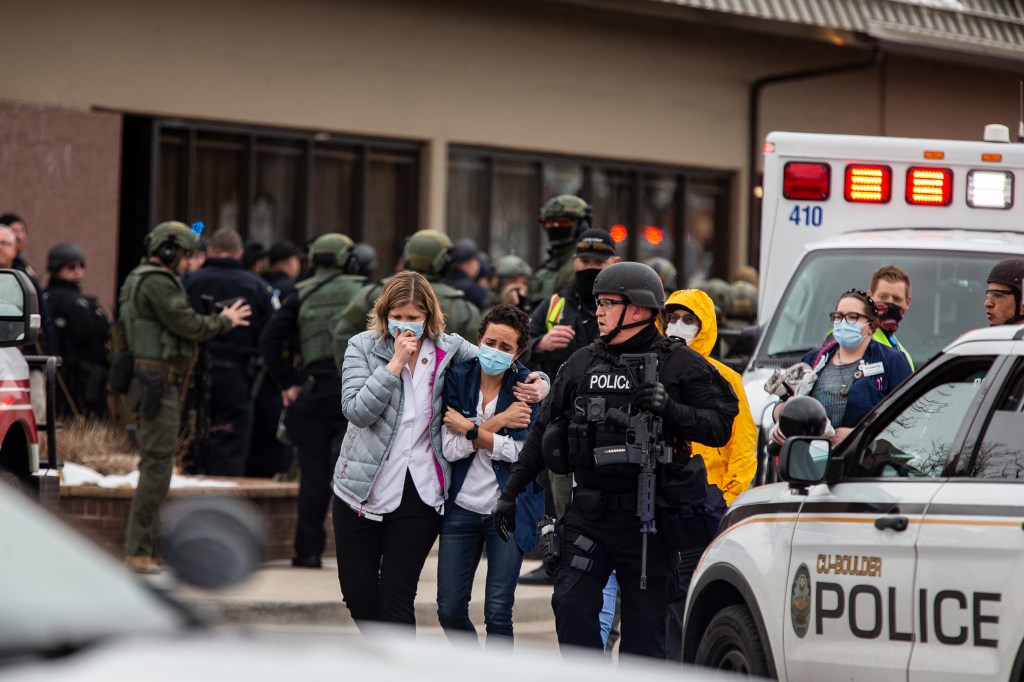 A simple trip to the grocery store for many became a fight for survival Monday at a King Soopers in Boulder, Colorado.

Witnesses said a person came into the grocery store in south Boulder and opened fire, killing 10 people, including a Boulder police officer, authorities said Monday. One person was taken into police custody and the individual is at an area hospital for treatment of injuries suffered in the incident, police Cmdr. Kerry Yamaguchi said.

CNN affiliate KMGH’s helicopter recorded a shirtless man being taken from the supermarket. The man had what appeared to be blood on his arm and right leg and his hands appeared to be cuffed behind him as two officers escorted him away. The man was taken away in an ambulance.

One of the 10 people killed was Officer Eric Talley, who was the first police officer to respond, according to Boulder Police Chief Maris Herold.

Ryan Borowski told CNN’s Erin Burnett he was at the store to buy a soda and bag of chips when he heard several loud bangs inside the store and began to run.

“We just all ran to the back of the store and out the back door and employees showed us the way,” said Borowski. “And we told the employees what was going on. So, everybody helped each other and we just ran to safety as quickly as we could.”

When asked if he could see where the shots were coming from, Borowski said, “I didn’t see a shooter, I just saw terrified faces running towards me and that’s when I turned and ran in the other direction.”

Borowski also said he never imagined being in a shooting situation in Boulder. “This feels like the safest spot in America, and I just nearly got killed for getting a soda and a bag of chips,” he said.

Neven Sloan told CNN affiliate KMGH-TV he and his wife were shopping for mushrooms and milk when he just heard a bang.

“I was like, that’s kind of weird. I didn’t know if it was like a gunshot or whatever, but it was probably three seconds before we heard another, just like ‘bang bang bang bang bang,’ and I immediately sprinted over to her and was like, ‘We’ve got to get out of here,’ and I pushed open the emergency door,” he said.

Andrew Hummel told KMGH-TV he “heard a loud bang and then everybody kind of sprinted toward the back of the store.”

“I didn’t see anything; I could just hear … and I just ran — I just wanted to get out of there,” Hummel said. “There was so much going on in such a compact area.”

Hummel said as soon as he got out, he immediately called his parents and his friend and roommate Mason, who works at the store.

Hummel said his first priority was making sure Mason got out safe. He later found out that Mason was hiding in a storage room with other customers.

“One of the biggest scary texts he sent, he just said, ‘I love you guys. Thank you for everything in case things go bad.’ That was a really hard text, especially me being in this situation,” Hummel said. “That was something I would never want to hear from any of my friends. It was horrifying. It was truly horrifying.”

Outside of the store

Outside of the store, Jessica Crumby told CNN’s Anderson Cooper she was laying on a table in a tattoo shop that in the same shopping center as King Soopers. She said she heard about four gunshots.

“All of a sudden we just heard ‘pop, pop, crack, crack,'” she said. “We kind of stopped what we were doing and we heard some glass shattering.”

Crumby said she went outside and saw a neighboring yoga studio whose window “looked like it had been shot in.” She also saw people running out of King Sooper and she heard sirens in the background.

At an apartment complex near the grocery store, a man named Ben was inside his apartment when he heard gunshots.

“I didn’t think much of it because it was all muffled from in my apartment,” he told CNN affiliate KCNC.

He says he looked out his window and he saw 40 or more police officers show up from all the surrounding cities. He told KCNC he saw 10 to 12 people being taken to a bus.

“They pulled out a guy who had no shirt on, no pants and his whole right side of his leg was bleeding,” he said. “It’s definitely super scary, I’m there twice a week getting my groceries and I was actually about to go there until I saw all the cops outside.”