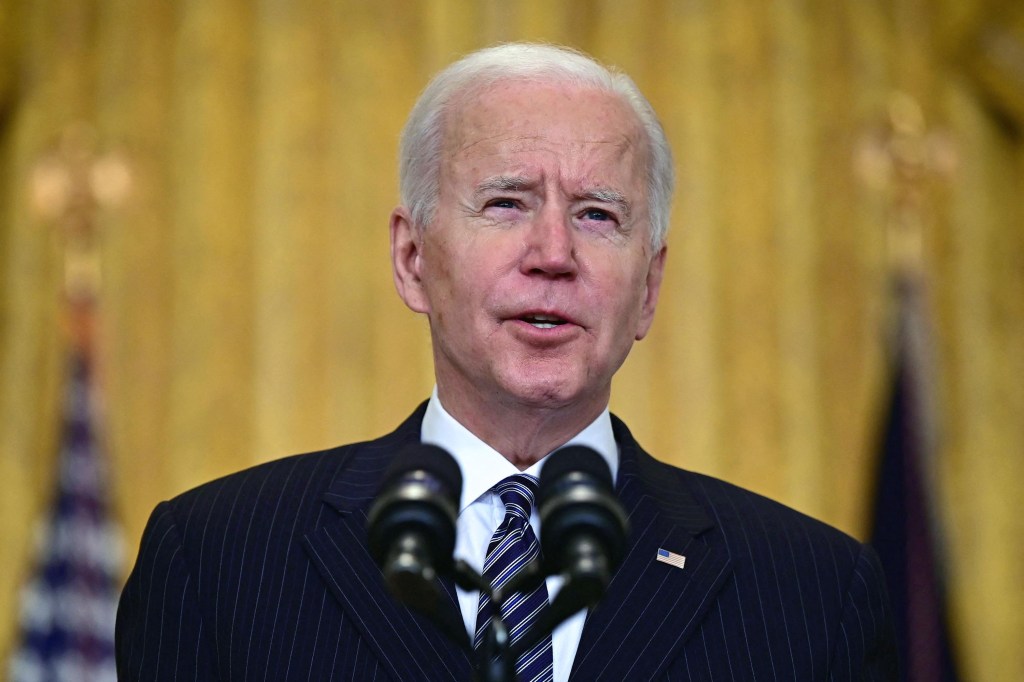 President Joe Biden on Friday condemned rising hate crimes against Asian Americans in the wake of the mass shooting in the Atlanta area that left eight people dead, including six women of Asian descent.

Biden said hate crimes against Asian Americans have been “skyrocketing” since the coronavirus pandemic began more than a year ago and that the country cannot be silent in the face of the hate and violence.

“Our silence is complicity. We cannot be complicit. We have to speak out. We have to act,” Biden said, speaking from Emory University in Atlanta.

Biden and Vice President Kamala Harris traveled to Atlanta on Friday to meet with Asian American leaders in the wake of the deadly shooting. They had originally planned to travel to Atlanta to tout the benefits of the $1.9 trillion Covid-19 economic relief package that Biden recently signed into law, but the White House scrapped plans for a rally after the shooting.

“The conversation we had today with the (Asian American and Pacific Islander) leaders, and that we’re hearing all across the country, is that hate and violence often hide in plain sight. It’s often met with silence,” Biden said. “That’s been true throughout our history, but that has to change because our silence is complicity.”

Biden urged Congress to pass the Covid-19 Hate Crimes Act, which he has said would expedite the federal government’s response to hate crimes that have risen during the pandemic, support state and local governments to improve hate crimes reporting and make information on hate crimes more accessible to Asian American communities.

Biden and Harris did not explicitly state that they considered the shootings earlier this week a hate crime. But they noted that whatever the motivation of the shooter, the killings come amid rising hate crimes against Asian Americans in the United States.

The vice president said: “For the last year, we’ve had people in positions of incredible power scapegoating Asian Americans — people with the biggest pulpits spreading this kind of hate. Ultimately this is about who we are as a nation. This is about how we treat people with dignity and respect.”

During a meeting with leaders of the Asian American Pacific Islander — sometimes shortened to AAPI — community, Biden echoed Harris in condemning the rhetoric from powerful political leaders, according to one attendee. Stephanie Cho, the executive director for Asian Americans Advancing Justice, said former President Donald Trump’s name came up repeatedly during Biden’s hourlong meeting with the group.

Biden said he would work as “much as possible” to roll back that rhetoric.

“He definitely said that they were definitely harmful,” Cho said of when the topic of Trump’s statements came up in the meeting.

“And it’s his position and his administration to completely roll back all of that,” Cho added.

Cho described the meeting as “very somber” but said that Biden was “trying to understand” the issue and to hear directly from AAPI leaders.

Biden would not describe the shootings as a hate crime yet, and Cho said she understood why he has to take that position, although she feels differently.

A trip to a key state

Prior to meeting with the AAPI leaders, Biden and Harris visited the Centers for Disease Control and Prevention, which is headquartered in Atlanta, and received an update on the pandemic from health and medical experts.

“This is a war and you are the front-line troops,” Biden told the CDC staff. “I came here to say thank you.”

The visit came as the Biden administration reached its goal of 100 million shots in arms.

Georgia has emerged as a key political state for Democrats. Biden narrowly won there in the presidential race and Democrats subsequently won two Senate seats there earlier this year, which gave the party control of the chamber — enabling passage of Biden’s sweeping Covid-19 law.

Biden touted passage of his administration’s Covid relief package in his remarks, boasting that Americans who’ve already seen direct payments from the package “can thank Senators Warnock and Ossoff — but for their votes, that would not have happened.”

“If anyone ever wondered if voting can change your country, Georgia just proved it can. Because when you elected two new United States senators, it made it possible to pass the American Rescue Plan — landmark legislation to not only meet the emergency we’re in but transform this nation,” he said.

Both Warnock and Ossoff narrowly won their seats from incumbent Republicans in runoff elections, flipping the balance of control in the Senate and paving the way for passage of the administration’s American Rescue Plan, which cleared the Senate without any Republican support.

In a statement following the meeting, Warnock and Ossoff pointed to the American Rescue Plan as a bright point in a tough week. They said the meeting consisted of discussions about how the legislation will affect Georgians — from free vaccines to direct payments to Peach State residents who qualify — and looked toward investing in infrastructure as a next step.

“As Georgia unites in grief after this week’s massacre, the President and Vice President made clear today that they are here for Georgia, and that together we will defeat Covid-19, rebuild our economy, and re-unite our country,” Ossoff said.

Warnock added, “I look forward to welcoming (Biden and Harris) back to Georgia, and working with them to make sure the robust relief we passed—from expanded tax refunds for working families, to debt relief for farmers of color, to strong federal incentives to expand Medicaid in our state and more—is reaching Georgians where they are to help us continue moving beyond the health and economic devastation of this once-in-a-century pandemic.”

Abrams has devoted years to expanding the electorate and boosting turnout in Georgia, a typically reliable red state. Biden was the first Democratic presidential candidate to win Georgia since 1992.

Georgia is ground zero for one of the country’s biggest fights over voting rights. Georgia Republicans are trying to pass new laws to make voting more difficult — an expansive new voting bill unveiled on Wednesday would give the state broad powers over local election officials, set limits on weekend early voting and add voter ID requirements for absentee ballots.