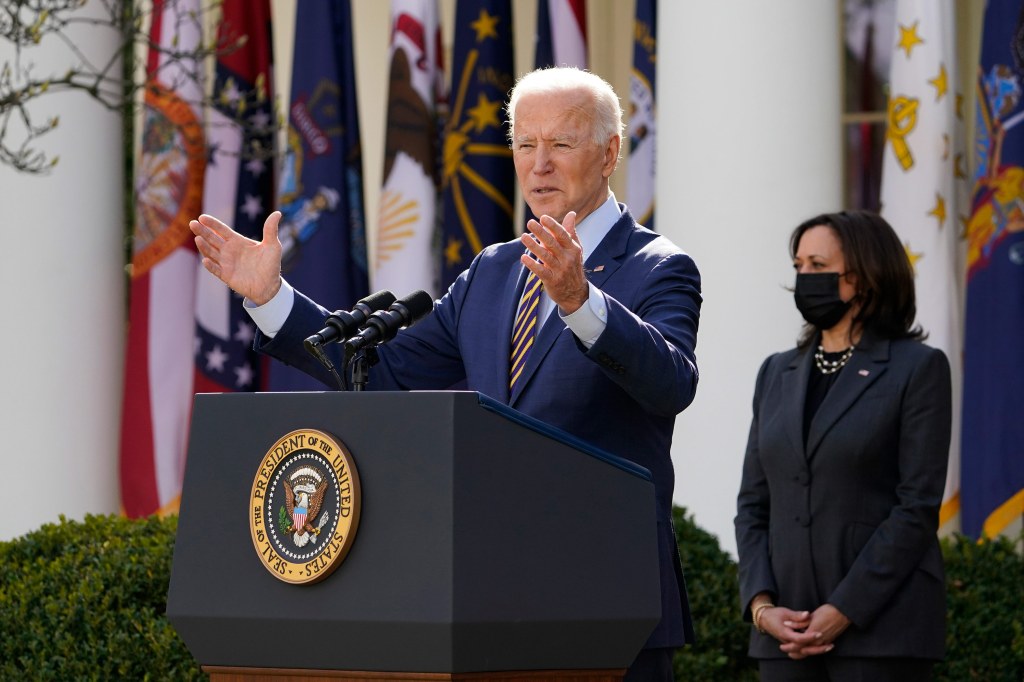 Biden and Harris to visit Georgia, a battleground that paved way for agenda

Democratic voters in Georgia may have helped deliver Joe Biden‘s long quest to win the White House, but they take even prouder ownership of their critical role in cementing an early chapter of his legacy through the passage of the American Rescue Plan.

“You still just feel the relief in the air,” said Mariama Davis, who logged countless hours volunteering for the President and Vice President Kamala Harris. “We actually are about to head back to somewhat of a normal situation that we were used to before. So, honestly, I’m satisfied.”

Davis is among the voters who not only helped Biden carry Georgia — the first Democratic presidential candidate to do so since 1992 — but also helped Democrats win control of the Senate. Gaining the majority in the upper chamber made the Covid-19 relief bill a reality.

For the first time since taking office, Biden and Harris are visiting Georgia on Friday, as part of a series of stops across the country the administration is calling the “Help is Here” tour. The state has suddenly emerged as one of the nation’s most pivotal battlegrounds, with one of the country’s biggest fights over voting rights also underway.

Davis said she can feel how that $1.9 trillion relief plan already is lifting up small businesses and their customers. She manages the Beehive, a boutique here in Atlanta.

“This week alone,” Davis said, “we have been gloriously overwhelmed by the numbers we’ve had.”

But the White House’s plan to promote the Covid relief package took a somber turn after a rampage here this week killed eight people, including six women of Asian descent. White House officials ended up canceling a planned evening rally intended to help explain the benefits of the law.

The President and vice president are instead set to meet with Asian American leaders. Still, the White House has stopped short of calling the shootings a hate crime, despite calls to do so.

While in Atlanta, Biden and Harris are also scheduled to visit the Centers for Disease Control and Prevention, meeting with experts on the same day that the administration says it will hit its goal of administering 100 million doses of the coronavirus vaccine.

“We’re going to beat this,” Biden said Thursday. “We’re way ahead of schedule, but we have a long way to go.”

Biden also will meet with Georgia Democrat Stacey Abrams, according to an administration official and an Abrams aide.

The White House said the rally, which was going to be the first in a series of campaign-style events touting the benefits of the law, will be postponed. But it was no accident the location selected was Georgia.

For Biden and Harris, there is no state like it.

In November, Biden narrowly defeated President Donald Trump here by about 12,000 votes, which were counted again and again during a series of post-election reviews. And in January, that win became even sweeter for Democrats after Raphael Warnock and Jon Ossoff swept their runoff races, ending Republican control of the Senate.

“I shudder to think about what would have happened had Georgians not come out in historic numbers and flipped the Senate,” said Nse Ufot, the chief executive officer of the New Georgia Project, a voter registration group.

Ufot said she believes the Biden administration should speak more forcefully about attempts in Georgia and across the country to curtail voting rights. She also hopes Biden will prioritize federal election revisions, which may happen only by eliminating the Senate filibuster.

“I think that the President could clearly and forcefully say that there are not both sides to this debate and there was no widespread voting fraud,” Ufot said. “He could also provide cover to some of the CEOs who are on the fence about whether or not to wade in on this issue.”

Ufot is among the progressive leaders who say they are pleased with the first two months of the Biden presidency, but they are eager to hear concrete plans on more of his campaign promises, including a federal $15 minimum wage, which was taken out of the Covid relief bill.

Asked how patient she was, she replied: “I don’t have any patience at all. Our people are suffering.”

Even as a new season is dawning here, with trees and flowers already in bloom, some front yards are still dotted with Biden-Harris campaign signs. Two homeowners in the Inman Park neighborhood say they are leaving their blue and white signs as a show of support for Biden, which they say has allowed them to exhale after four years of Trump.

“It’s much more peaceful. There’s just a weight lifted off,” said Kevin Randolph, a retired teacher who supported Biden. “You can see it in town; everyone’s so elated.”

It’s that elation that comes to life in conversations with Biden supporters like Davis, whose business benefited — literally — from Georgia turning blue.

“We saw an influx of orders from all around the country, because people were wanting to support Black businesses, specifically in Georgia, as a way to say thank you,” said Davis, who manages the boutique that her sister owns.

She understands the urgency in the minds of some Democrats, who wish Biden would begin taking more progressive stands. But she said she is willing to give him a bit of time.

“Everybody needs to just relax and be patient. Can we get to 100 days?” Davis said with a laugh as she closed up her shop one night this week. “Everything doesn’t happen overnight, and folks know that. This is government we’re talking about and they like to do things real slow, which gets on my nerves, but I will be patient.”

Biden and Harris to visit Georgia, a battleground that paved way for agenda