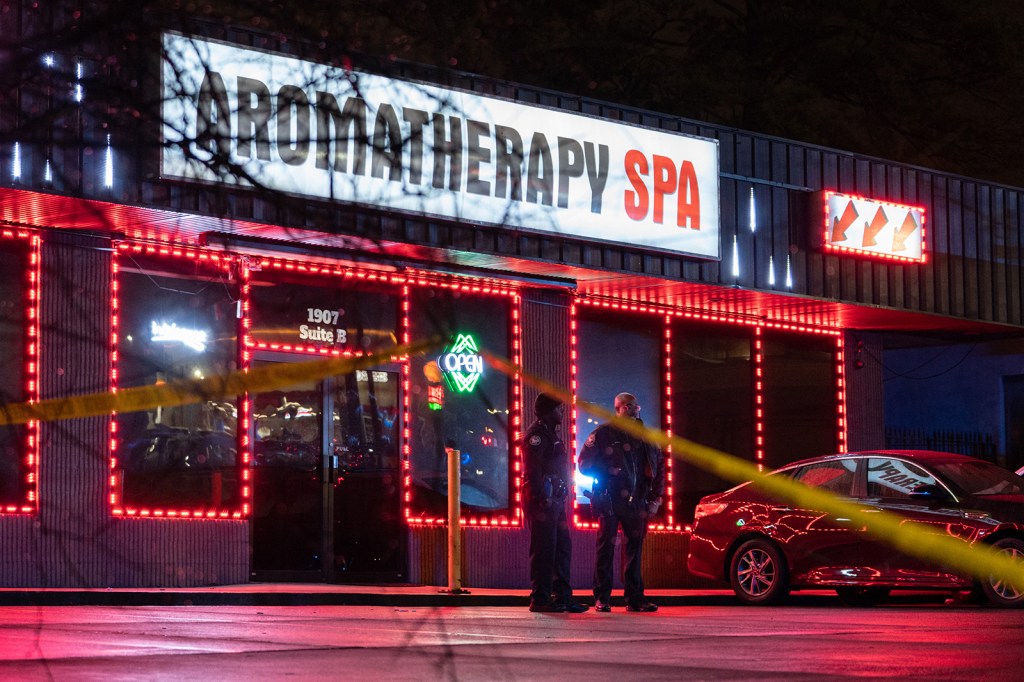 A man suspected of killing eight people at three Atlanta-area spas was headed to Florida “perhaps to carry out additional shootings” when he was arrested Tuesday night, Atlanta’s mayor said Wednesday, citing investigators.

His family had helped police search for him, authorities said, perhaps averting further harm that the mayor said “could have been significantly worse.”

“It’s very likely there would have been more victims,” Mayor Keisha Lance Bottoms said in a news conference at Atlanta police headquarters.

And preliminary information indicates that the killings — of six Asian people and two White people — may not have been racially motivated, but instead could relate to the suspect’s claim of a potential sex addiction, Cherokee County Sheriff Frank Reynolds said at the joint news conference.

Still, it was too early to know a motive, Atlanta Police Chief Rodney Bryant said. “There’s still a lot more work to be done. … We’re just not there as of yet,” Bryant said.

Because of the victims’ backgrounds, some public officials had raised fears before Wednesday’s police news conference that ethnicity had come into play, amid rising concerns nationwide about anti-Asian violence during the coronavirus pandemic.

Police say Robert Aaron Long, 21, of Woodstock, Georgia, is suspected of opening fire at the spas late Tuesday afternoon and early evening, first at a business about 30 miles northwest of Atlanta, followed by two more at spas in northeastern Atlanta.

“Sex” is a hate crime category under Georgia’s new law. If Long was targeting women out of hatred for them or scapegoating them for his own problems, it could potentially be a hate crime. The shootings don’t have to be racially motivated to constitute a hate crime in Georgia.

Long was arrested Tuesday night about 150 miles south of Atlanta, in a traffic stop on Interstate 75, authorities said.

Long “may have frequented some of these places in the past,” Reynolds said, without specifying whether he meant exactly those businesses, or spas like them. Long also told investigators the killings were not racially motivated, Reynolds’ office said in a news release.

Long legally purchased the gun used in the shootings at a local gun store, Big Woods Goods in Holly Springs, Georgia, an attorney for the company told CNN.

Baker, like the Atlanta mayor, said Long told investigators he was headed to Florida and was “going to do more acts” there.

Bottoms, acknowledging most of the victims were Asian, said “we know (violence against Asian Americans) is an issue that’s happening around the country; it is unacceptable, it is hateful, and it has to stop.”

The spas were “legally operating businesses” which were not on the authorities’ radar, the mayor said.

South Korea’s foreign ministry, which had been in touch with its consulate in Atlanta, has said that four of the victims were of Korean ethnicity. The six Asian victims were women, the Atlanta Journal-Constitution reported, citing authorities.

Shortly before 5 p.m. Tuesday, deputies were called to Young’s Asian Massage between the Georgia cities of Woodstock and Acworth after reports of a shooting, Cherokee County sheriff’s officials said.

That shooting left four people dead — two Asian, and two White — and one person injured, Baker said. Two of the victims were pronounced dead at the scene, while the other two died at a hospital.

About an hour later and 30 miles away, Atlanta police responded to what was described as a robbery at the Gold Massage Spa on Piedmont Road in Atlanta. Police said they found three people dead.

While there, police received another call of shots fired across the street at the Aroma Therapy Spa, where they found one person dead, Bryant said.

Investigators found surveillance video of a suspect near the Cherokee County scene and published images on social media.

“(The family members) are very distraught, and they were very helpful in this apprehension,” Reynolds said.

Investigators were able to track Long’s phone, and Reynolds reached out to the sheriff in Georgia’s Crisp County, well to the south, to let him know Long appeared to be heading in that direction, the Cherokee County sheriff said Wednesday.

Around 8:30 p.m. Tuesday, the highway patrol about 150 miles south of Atlanta was alerted that a suspect in the Cherokee County shooting was heading its way, Reynolds said in a video on the Crisp County Sheriff’s Department Facebook page.

After Long’s vehicle was spotted, a chase ensued on Interstate 75 and a state trooper performed a maneuver that sent the SUV out of control, authorities said.

Police confiscated a 9 millimeter gun from his vehicle, according to Baker, the Cherokee County sheriff’s captain.

Video evidence — including that showing Long’s vehicle in the area of the Atlanta shootings — suggests that Long is responsible for the killings in Atlanta, police there said.

One law enforcement source told CNN that the suspect is on suicide watch and was wearing a vest intended to protect him from self-harm in the mug shot.

The Daily Beast was first to report the existence of the account. A screenshot of the account, obtained by CNN, showed it used the name “Aaron Long” and the bio section caption read, “Pizza, guns, drums, music, family, and God. This pretty much sums up my life. It’s a pretty good life.”

CNN went to the home of Long’s grandparents in Morristown, Tennessee, on Wednesday. “All I want to say is that he is our grandson and we still love him very much,” said Long’s grandmother, Margaret Long, who was visibly upset.

Long’s grandfather interrupted the conversation, saying they’d been told not to speak to anyone and gave no further comment.

The roommate, who spoke on condition of anonymity, said he lived with Long for several months in summer 2020 at a transition house for people exiting rehab.

Long had been in rehab for sexual addiction, the roommate said, adding that Long didn’t talk about his addiction but had seemed to be doing better by the time he left the transition house. The roommate said he hadn’t been in contact with Long “in a long time.”

The roommate said he saw a surveillance photo of Long online after the shootings Tuesday night, and “when I zoomed in I could see the side of his face, and I knew it was him.”

The roommate called police that night, identifying the suspect as Long, according to records from Cherokee County’s emergency dispatch office.

Tyler Bayless said he shared a housing unit with Long at Maverick Recovery, a rehab facility in Roswell, Georgia, between August 2019 and February 2020.

Bayless told CNN that Long felt “tortured” by an addiction to sex and had gone to massage parlors for sex.

“It was something that absolutely would torture him,” Bayless said.

He said Long was a “deeply religious person — he would often go on tangents about his interpretation of the Bible,” and was distraught about his addiction to sex.

Bayless said that on multiple occasions during his stay at the facility, Long told him that he had “relapsed” and “gone to massage parlors explicitly to engage in sex acts.”

A law enforcement source told CNN Wednesday that Long was recently kicked out of the house by his family due to his sexual addiction, which, the source said, included frequently spending hours on end watching pornography online.

An incident report from the CCSO said an anonymous caller to 911 told dispatch Long was “kicked out of his parents’ house last night,” adding that he “was emotional,” the incident report says.

President Joe Biden was briefed overnight about the shootings, and White House officials have been in touch with the Atlanta mayor’s office and the FBI, White House press secretary Jen Psaki said Wednesday.

“In the same way African Americans across this country asked for support and we asked for people to stand with us over the summer, it’s important that people stand with our Asian brothers and sisters in the same way,” she said. “They are being targeted unfairly, and in Atlanta what we’ve seen, the worst has happened.”

Bottoms added that she thought “it would be appropriate” if Long was charged with a hate crime.

Georgia state Rep. Bee Nguyen told CNN’s Erin Burnett she believes the spa shootings were “a racially-motivated crime” and said the US “has a reluctance to admit that there is very real and deep-rooted systematic racism that does result in violence.”

“In this particular case, where the victims were Asian women, we see the intersections of racism, xenophobia and gender-based violence,” Nguyen said.

Younghoe Koo, Atlanta Falcons placekicker and South Korea native, released a statement on Instagram explaining the shooting’s affect on him and how hate crimes against all races needs to stop.

“As an Asian American, I have heard the jokes and name calling. I often dealt with it by ignoring what was said and minding my own business. I don’t have all the answers, but I realize now more than ever that this is an issue that needs to be addressed and that ignoring it won’t help us do that. I know this one post won’t solve the problem, but I hope to help raise awareness on hate crimes against all. #stophate” Koo’s post read.

“Raise those concerns so that we can do as much as we can to provide support and hopefully prevent tragedies like this from happening moving forward,” Park said.

“Regardless of the motivation, given the concerns the community already has in light of all the attacks that we’ve seen — particularly against Asian American women and the elderly — I think this is a reminder that we need to do everything that we possibly can to protect the most vulnerable among us.”