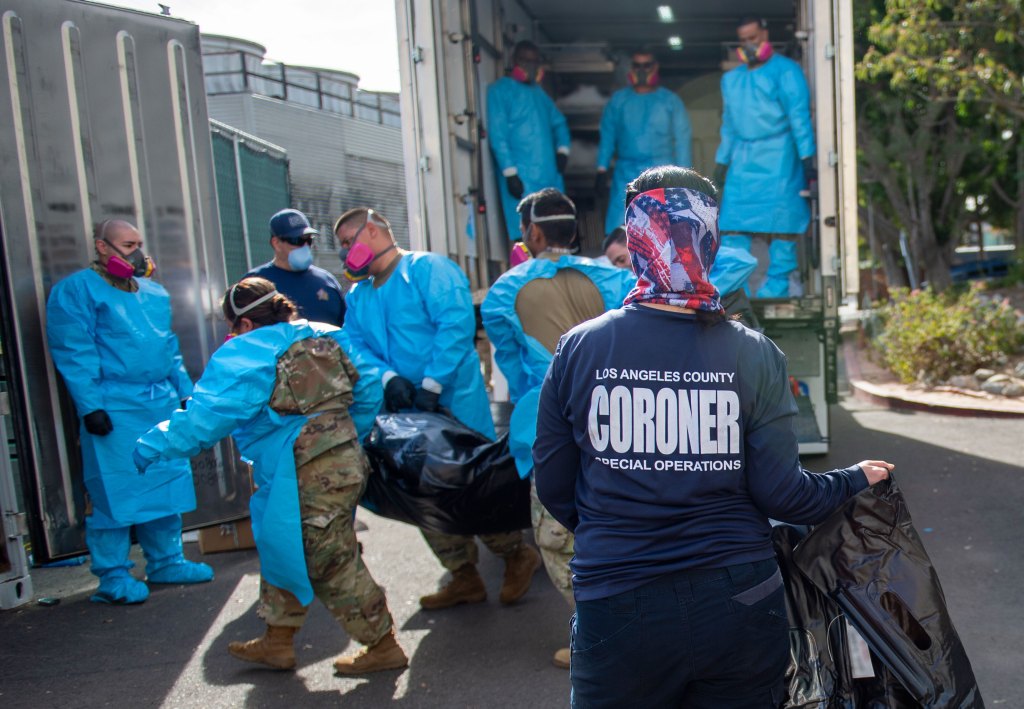 As the US approaches 400,000 deaths from the coronavirus pandemic, new cases have been trending down but multiple states are reporting cases of new variants of the virus.

The US recorded 1.5 million new Covid-19 cases in the past seven days, according to the most recent data from Johns Hopkins University, an 11% drop from the previous week. Cases declined in 35 states week-over-week, and 18 states saw a drop in the number of deaths.

But with a longer range view, last week’s apparent improvement falls much closer to average. Over the past month, the number of new Covid-19 cases recorded each day has ranged from nearly 101,000 to more than 302,000; over the past seven days, new cases averaged about 218,000 daily.

“The virus has established itself in the human population and it’s not going anywhere,” Dr. Amesh Adalja, an infectious disease expert with Johns Hopkins University, told CNN. “We’re going to see a lot of transmission until we cross the threshold for herd immunity.”

At least 398,879 people have died in the U.S. from Covid-19 in the United States, and the country passed the 24 million mark in total cases on Monday, according to Johns Hopkins University data. More than half — 60% — of all Covid-19 cases in the United states have been reported since Election Day, according to a CNN analysis of Johns Hopkins University data.

California, the current epicenter of the pandemic in the US, became the first state on Monday to record more than 3 million Covid-19 cases, according to data from Johns Hopkins and the Covid Tracking Project. The number of Covid-19 cases in California has tripled in just the past two months.

And it’s far higher than any other country’s Covid-19 death toll.

The variant, known as 452R, is different from the B.1.1.7 variant first detected in the United Kingdom, health officials say. As testing for variants has ramped up in California, the 452R version has been identified more frequently since November and has been identified in large outbreaks in Santa Clara County.

At least 122 cases of the B.1.1.7 variant have been identified in 20 US states, according to data posted Monday by the US Centers for Disease Control and Prevention.

This includes at least 46 cases in Florida, 40 in California, six in Colorado, five in Minnesota, four in Indiana, four in New York, two in Connecticut, two in Maryland, two in Texas, and one case each in Georgia, Illinois, Louisiana, Massachusetts, Michigan, New Mexico, Oregon, Pennsylvania, Utah, Wisconsin and Wyoming.

Meanwhile, more than 12.2 million Americans have received their first dose of the Covid-19 vaccine and more than 31 million doses have been distributed across the country, according to the latest data from the CDC.

That’s as the country is just days away from President-elect Joe Biden’s inauguration.

Biden has outlined a plan for vaccinations that includes opening up eligibility to more people, creating more vaccination sites and taking measures to increase vaccine supply and distribution.

Washington state is now allowing anyone age 65 and older to receive a Covid-19 vaccine, part of a major change in plans to distribute shots. The announcement from Gov. Jay Inslee makes nearly 400,000 more people eligible to be vaccinated.

The governor also announced a goal of increasing the number of people vaccinated every day to 45,000, which is greater than the current amount of vaccine they have available.

“We can’t reach that goal unless we get more doses, obviously, from the federal government,” said Inslee, but he said that he wants the state to be prepared for deliveries to be ramped up.

Minnesota Gov. Tim Walz on Monday called for the federal government to release more doses of the Covid-19 vaccine, saying that his state currently had “a very limited supply.”

“The federal government has been giving mixed messages on vaccine availability and guidance, and we need them to step up and get more vaccine to the state,” Walz said

“I believe the Biden administration understands the importance of this,” Evers said while speaking at a vaccination clinic in Green Bay. “We will get the vaccine that we need.”

New York Gov. Andrew Cuomo said he sent a letter to Health and Human Services Secretary Alex Azar on Monday demanding an explanation for what Cuomo said was a false claim that vaccine doses held in reserve would be shipped to states. “The federal government is in control of the supply, they must increase the supply,” Cuomo said.

Cuomo said he also sent a letter to the president of Pfizer asking if New York can buy vaccine doses directly from the drug company, which Cuomo believes would be a first.

In a statement provided to CNN, Pfizer responded to Cuomo’s comments, saying, the company is open to collaborating with HHS to increase access to the vaccine.

“However, before we can sell directly to State governments, HHS would need to approve that proposal based on the EUA granted to Pfizer by the FDA,” the statement said.

In Los Angeles, county officials are struggling to keep up with vaccination demand. While people 65 and older are eligible for the vaccine, the county is still inoculating health care workers. Dodger Stadium has opened as a mass-vaccination site and the county is scheduled to open similar sites at other locations this week.

Beutner said the district, which has 1,413 schools spread over 710 square miles, has 12 health clinics in high-needs areas already licensed to provide vaccinations and can pivot to vaccination sites.

“In a typical community we serve, there are about three drugstores, 2 fire stations, and 25 schools,” he said. “No organization has the infrastructure to provide easier access to vaccinations than schools.”

Hospitals under ‘severe stress’ in next month

More than 123,000 Americans are currently hospitalized with the virus nationwide, according to the Covid Tracking Project. To put that into perspective, that’s more than double the country’s Covid-19 hospitalization peak in spring, according to data from the project.

In their latest briefing, the University of Washington’s Institute for Health Metrics and Evaluation projected hospitals in many states “will be under severe stress in the next four weeks.”

That’s already been the case in different parts across the country.

Los Angeles County — the epicenter of California’s Covid-19 crisis — has battled a brutal surge of infections, hospitalizations and deaths for weeks now. County health officials reported Monday more than 7,328 people remained hospitalized with the virus — 23% of whom were in intensive care units.

According to the state, the Southern California region continues to have 0% available ICU capacity.

In another sign of the spread of the virus in Los Angeles County, an air pollution control agency says it has temporarily suspended limits on cremations to assist crematoriums in the county with a “backlog” caused by the pandemic.

Permits for crematoriums usually contain limits on the number of human remains that can be cremated each month based on the potential impact they will have on air quality, according to the South Coast Air Quality Management District.

But after requests from both the county coroner and health department, the agency issued an emergency order Sunday suspending permit conditions that limit the number of cremations.

In Georgia, one hospital told CNN affiliate WSB they were so full they had to treat patients in hallways and ambulances.

“We truly are in the darkest days,” Dr. Deepak Aggarwal, with Northeast Georgia Medical Center, told the news station.