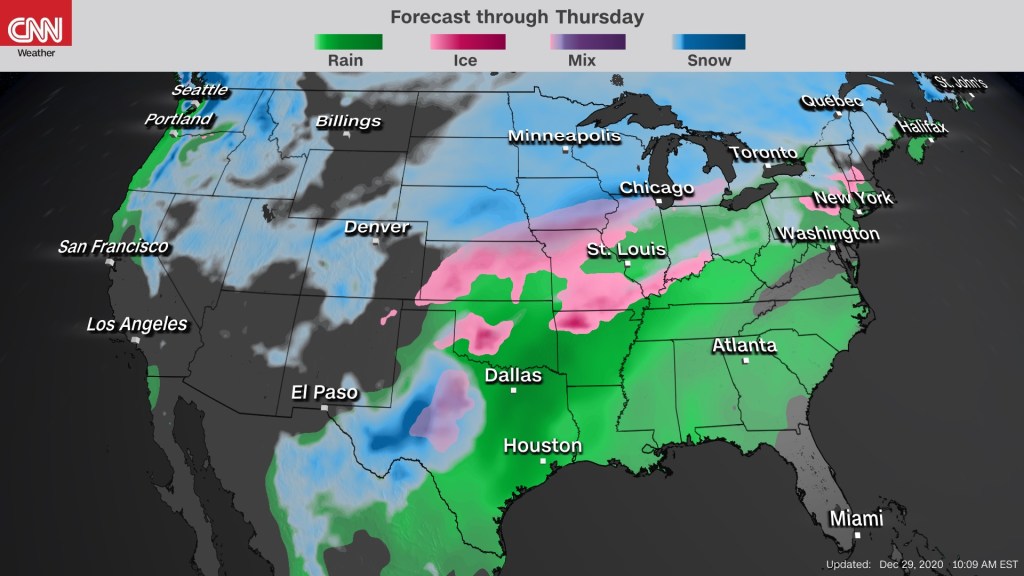 If you find yourself this New Year’s Eve cozy on the couch in your pajamas, like so many Americans during this pandemic, it might be the best place to be. The weather won’t be ideal for much of the country, making the “at-home” option of ringing in the New Year sound even better.

A double whammy of winter storms is bringing snow, ice and rain to millions.

About 40 million people in a dozen states — stretching from Texas to Michigan — were under winter weather alerts Tuesday. A second, more southerly storm will add to the mix midweek.

The storm brought snow, some of it heavy, across much of the Midwest on Tuesday.

By evening, Des Moines, Iowa, had notched 9 inches, 7 inches fell in Omaha, Nebraska, and Rockford, Illinois, had nearly 3 inches. Chicago was up to about 2 inches.

Sleet and possible freezing rain was to push into portions of Iowa and northern Missouri, making roads extremely slick. The weight of the frozen precipitation could bring down tree limbs and power lines, causing power outages.

During the overnight hours, snow could change over to sleet for Chicago, then change to rain by Wednesday morning. This will cause huge impacts to commutes.

“Some power outages are possible due to the combined effects of wet snow accumulation, some icing and wind gusts up to 30 mph,” the National Weather Service office in Chicago said.

The National Weather Service also warns: “The heavy, wet nature of the snow may be difficult to shovel, especially where several inches accumulate.”

The agency is forecasting 2 to 5 inches of snow and sleet for the Chicago area, along with one to two tenths of an inch of ice.

The heaviest snow could total up to 10 inches for portions of Iowa, northern Illinois and southern Wisconsin through Wednesday.

A second storm system will move in on the southern side of the current storm midweek, enhancing snow and storms across the South through New Year’s Eve.

“There will be a pretty clear separation of air masses along the Mississippi River, with warmer than average temperatures along the eastern half, with cooler temperatures to the west,” said CNN meteorologist Brandon Miller.

This will set up an area of nasty weather of all types as multiple storm systems move along this boundary.

“Parts of the central Plains into the Midwest, especially stretching from Kansas through Missouri and into the Great Lakes, could see a sustained period of freezing rain and ice on Wednesday and again on Friday,” Miller said.

This could make for some treacherous travel conditions, especially along the Interstate 70 and Interstate 80 corridors.

Snow and ice could hit as far south as Texas. The National Weather Service office in Midland/Odessa is forecasting 2 to 10 inches of snow through Thursday morning.

Rain and storms will also be an issue for millions this week.

Heavy rain will fall on much of the Deep South, the Ohio Valley and portions of the Northeast through Thursday evening, bringing 1 to 3 inches of rain for cities such as Oklahoma City and Little Rock, Arkansas, with about an inch of rain through much of the Ohio Valley.

The Storm Prediction Center is forecasting a slight risk of severe storms, including possible tornadoes, along the Gulf Coast for more than 7 million people on Thursday. These areas include New Orleans, Baton Rouge, Louisiana, and Jackson, Mississippi.

The severe threat shifts to parts of Georgia, South Carolina and North Carolina on Friday.

Snow and rain will stick around for many to ring in the New Year.

Expect rain at midnight to stretch from the Tennessee Valley to the Gulf Coast and portions of the Southern Plains. Midnight temperatures will be in the mid- to upper-50s for Charlotte and Atlanta. New Orleans will be wet, with temps in the mid to upper-60s.

There will be possible snow for central Texas on New Year’s Eve and the likelihood for ice across portions of Oklahoma.

Conditions in the West will be much calmer.

Temperatures in southern and central California will be in the mid-50s, with temperatures in the mid-40s and rain for the Pacific Northwest. The central Rockies will hover in the mid- to upper 20s, with quiet midnight conditions.