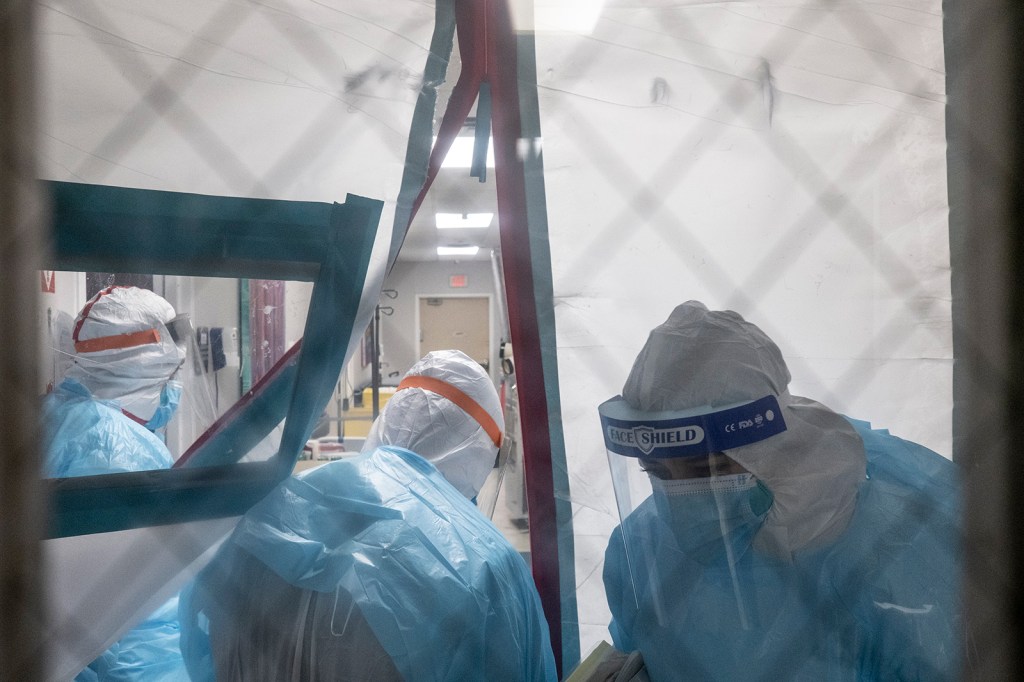 The US Food and Drug Administration on Friday night authorized a second coronavirus vaccine for emergency use as Covid-19 hospitalizations rose to another record and cases and deaths are piling up in unprecedented ways.

The FDA had signaled it would issue the authorization quickly for Moderna’s vaccine candidate, after the agency’s vaccine advisers voted Thursday to recommend approval.

“The emergency use authorization allows the vaccine to be distributed in the U.S. for use in individuals 18 years and older,” the FDA said in a tweet.

The Centers for Disease Control and Prevention still needs to green-light the vaccine before shots can be administered — and a CDC advisory panel is meeting this weekend to discuss it.

If all hurdles are cleared, Moderna’s vaccine could be given in the US next week — joining Pfizer and BioNTech’s vaccine, which rolled out this week, with first doses primarily being given to health care workers and residents of long-term care facilities.

“It’s an exciting time, but it’s a heartbreaking time,” Dr. Peter Hotez, dean of the National School of Tropical Medicine at Baylor College of Medicine, told CNN Friday of the vaccines’ arrivals. “The numbers (of cases, deaths and hospitalizations) are almost unspeakable at this point.”

In the US, average daily cases, total hospitalizations and average daily deaths are still rising to levels not previously seen, as hospital staff around the country warn they’re running out of space and energy to provide sufficient care:

• Cases: The country’s average number of daily cases across a week was 216,674 on Thursday — a record high, John’s Hopkins University data show. That’s more than three times what the daily case average was during a summer peak in July.

• Hospitalizations: The number of Covid-19 patients in US hospitals was 114,751 on Friday — the most recorded on a given day for the 13th straight day — according to the COVID Tracking Project.

• Deaths: The nation averaged 2,633 Covid-19 deaths daily across the last week — the highest average yet. The total reported Thursday, 3,270, is the third-highest daily total on record.

With the authorization of the Moderna vaccine, 5.9 million Moderna doses could be delivered next week, joining 2 million allocated next week from Pfizer, Health and Human Services Secretary Alex Azar said earlier this week.

“We still anticipate that every American will have the opportunity to be vaccinated by June,” Adm. Dr. Brett Giroir, assistant secretary for health at HHS, said.

Friday night’s authorization will, in the end, bring speedier relief, Azar said in a statement after the FDA’s announcement.

“Authorization of Moderna’s vaccine means we can accelerate the vaccination of frontline healthcare workers and Americans in long-term-care facilities, and, ultimately, bring a faster end to this pandemic.”

The Department of Defense “stands ready to work with our public and private-sector partners to ensure doeses reach Americans as soon as possible,” Acting Secretary of Defense Christopher Miller said in the statement. “Together, we will bring this pandemic to an end.”

The task at hand now is to tackle skepticism many communities have toward the vaccines, and pass along the facts, according to Dr. Francis Collins, the director of the National Institutes of Health. To that end, public figures including Vice President Mike Pence have received vaccinations on live television this week, hoping in part to inspire confidence.

“I’ve had the chance to be intimately involved in every step of the way here in the development of these vaccines. There have been no shortcuts taken, there’s no hidden information,” Collins told CNN Thursday. “This is something you want to do, for yourself, for your family, for the future of our nation.”

Model raises prediction for number of deaths by April

An influential coronavirus model at the University of Washington on Friday projected that a total 562,000 people in the US will have died from Covid-19 by April 1 — up significantly from the prediction it made last week, when it forecast 502,000 deaths by that date.

The increase is due to surges in cases and deaths, with particularly large increases in the nation’s most populous state, California, the model from the Institute of Health Metrics and Evaluation says.

The US could see more than 3,750 deaths reported daily in mid-January, the IHME predicted. The country so far has reported more than 311,000 total Covid-19 deaths.

Authorization of the Moderna vaccine is “fantastic news, and in the long term that’s going to really help us get Covid under control,” Dr. Chris Murray, IHME director, told CNN.

But it’s going to take time to get the vaccine delivered and for it to take effect in those who are immunized, he said.

“We don’t expect to see a major dent on the daily death rate from vaccination until sometime in February,” Murray said, adding there will be “many weeks ahead of these really high death numbers per day.”

VP and surgeon general get vaccines on live TV

After getting his shot, Pence said history will show this week’s vaccine rollout marked the beginning of the end of the pandemic, “but with cases rising across the country … we have a ways to go.”

Montgomery Rice said she hoped her example, as a Black physician who followed the vaccine data and decided to get vaccinated, inspires confidence in others who may be wary of it, including minorities and even undecided health care workers.

Getting the public messaging right about the vaccines is crucial, especially for the Black community that — along with other communities of color — has been disproportionately impacted by the coronavirus pandemic, Montgomery Rice said later Friday.

“Really, this is a life and death message for Black people about the coronavirus,” Montgomery Rice said at a National Academies of Science, Engineering, and Medicine meeting on Covid-19 vaccine campaign strategies.

Covid-19 cases have particularly exploded recently in California. The state averaged 38,700 new daily cases across the last week. Some of the recently reported cases are from a backlog, state health officials say.

Still, the average is more than nine times what the average was at the start of November, JHU data show.

And hospitals are becoming overwhelmed. Southern California’s intensive care units are filled to their typical capacity, officials said Thursday. If they go beyond capacity, health care workers will be caring for more patients than is safe, the Los Angeles County health director has said.

The county could soon declare a “systemwide crisis,” indicating hospitals have virtually run out of space, he said. If that is declared, all elective procedures could be canceled.

“If (cases keep) soaring for the next three of four weeks, we will have nothing left to meet this moment,” Garcetti said.

More than 98% of the state’s nearly 40 million residents are now under a stay-at-home order — that is, all of California except for a mostly rural section north of Sacramento — that officials hope will slow the spread of the virus.

In New York state, among the hardest hit areas early in the pandemic, new cases are soaring again, averaging more than 10,300 daily across the last week. That’s five times higher than what the average was November 1.

Hospitals in New York must notify state officials if they are three weeks away from reaching 85% of maximum capacity. So far, no hospital has, Gov. Andrew Cuomo said Friday.

The state will shut down the economy in any areas where hospitals make such a report — but this is “totally avoidable” if New Yorkers heed distancing and masking guidelines, Cuomo said.

Florida, meanwhile, on Thursday reported the highest number of daily new cases since mid-July. Kentucky’s governor announced a record number of new deaths, saying it was “by far the most people that we’ve lost.” Pennsylvania’s health officials announced the state’s number of hospitalizations is double the peak in the spring, with more than 1,200 Covid-19 patients in the ICU.

“We continue to hear of additional hospitals across the state that have few ICU beds left, or in some cases no ICU beds left,” Pennsylvania Secretary of Health Dr. Rachel Levine said Thursday.

And in Oregon, Gov. Kate Brown said hospitals remain “stretched to their limits” and extended her declaration of a state of emergency for Covid-19 for another two months, adding “these are the darkest days of this pandemic.”

But while many states are still battling a ferocious spread, others are loosening restrictions.

In Michigan, where Gov. Gretchen Whitmer has weathered severe pushback and rallies against restrictions meant to stop the virus, a decrease in Covid-19 markers in the last month led her to announce the lifting of some of those measures.

In-person classes can resume at high schools, and indoor venues including movie theaters can reopen with capacity limits and other precautions, Whitmer said at a news conference Friday.

Iowa Gov. Kim Reynolds said this week that Covid-19 case numbers have gone down in the state and announced she was lifting all curfews for bars and restaurants and removing limitations for social gatherings.

Bars and restaurants will be able to resume normal operations as long as customers are seated when eating or drinking, wear masks when not seated, be seated 6 feet away from other groups and there are no more than eight people per group, the governor said. The governor also announced she was lifting gathering limitations, but a distance of 6 feet is required between groups.

In Utah, where health officials said hospitals across the state are operating at capacity, Gov. Gary Herbert announced he was removing a restriction on alcohol sales after 10 p.m., saying local bars and restaurants have demonstrated a willingness to enforce physical distancing and mask wearing when customers aren’t eating or drinking.

“We appreciate the willingness to step up and help enforce protocols that make bars and restaurants a safe environment for the patron to come and participate,” the governor said.