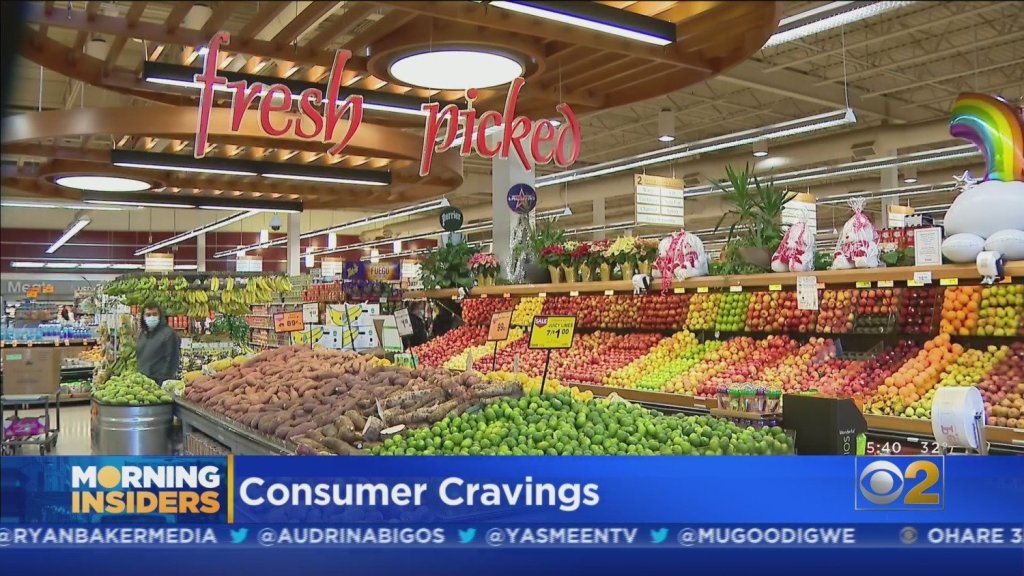 Every morning we update you on the latest with the COVID-19 vaccine; our freedom on the line, normalcy on the horizon.

One sector of society keeping an especially close eye on the vaccine timeline is grocers. They’ve enjoyed customers’ rush to the registers for months, but CBS 2 Morning Insider Lauren Victory explains high levels of food and drink spending aren’t likely to last.

“What’s for dinner?” must be one of the most popular sayings of quarantine; almost nine months of staring at grocery store shelves

“The sauces that they buy, the condiments that they buy; there’s more variety-seeking,” said Krishnakumar S. Davey, president of strategic analysis at IRI Worldwide.

Adventure seems to be coming from the grocery store, at least according to consumer spending tracked by Davey’s team.

His Chicago-based research firm, IRI Worldwide, found seafood consumption is way up, for example. Does that mean people have more of a craving for crab legs?

“I think it’s variety. So, ethnic food is also quite up. Both Korean, Mexican, Indian, Asian foods,” Davey said.

Boredom with our routine will speak volumes when the COVID-19 vaccine is widely available.

“Everybody’s itching to get out,” Davey said.

Davey predicted months of gains by grocers will likely peter out once a vaccine is widely available, because Americans are tired of eating at home.

Basic economics tells us if demand goes down, “there will be a lot more intense competition, right? In terms of pricing and promotions,” Davey said.

But that’s when. Here’s the now, with a recent spike in COVID cases.

“There are a few outages here and there,” Davey said.

Overall, his data showed most retailers were ready for a rush this time, unlike during the first wave of the pandemic.

CBS 2 found Pete’s Fresh Market at 47th and Kedzie was well-stocked for the next surge of shoppers, which brings us to what’s trending for the holidays.

“There’s going to be a lot more premium products that people are going to buy. If I’m not entertaining 10 people, but only 5 people, I’m likely to have, you know, more expensive wine or more expensive steak,” Davey said.

One 2020 trend that’s not likely to change after the vaccine: paper product shortages. Several people will return to the office, but some will be still be “doing business” at home.