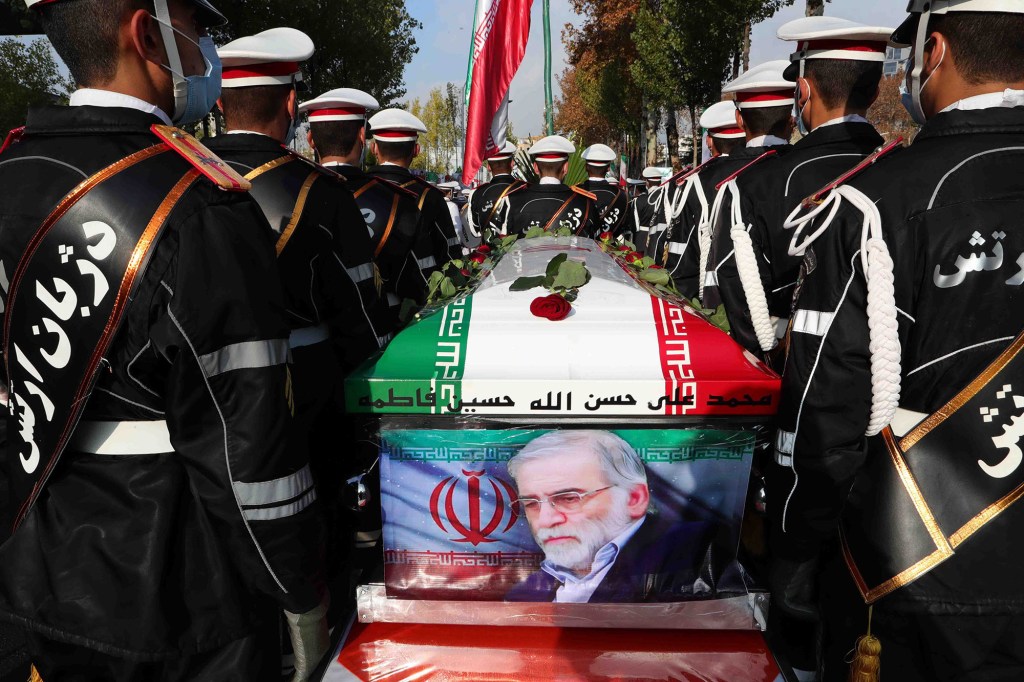 Days after the assassination of Iranian nuclear scientist Mohsen Fakhrizadeh, the country’s state media painted an elaborate picture of the killing that makes it sound like something straight out of a second-rate spy movie.

According to Iran’s semi-official Fars News Agency, the assassination played out something like this: Fakhrizadeh was traveling with his wife in a bulletproof car in the city of Absard, east of Tehran. They were surrounded by a security detail of three vehicles.

Fars reported that Fakhrizadeh heard what sounded like bullets hitting his car and decided to investigate for himself. When he got out of the vehicle, he was shot at least three times from a Nissan car that was approximately 150 meters (164 yards) away — the length of one and a half football fields. The Nissan then exploded. The entire event lasted three minutes, the news agency said.

The semi-official Iranian Students News Agency reported that Fakhrizadeh’s car was hit by gunfire, followed by an explosion and more gunfire.

IRIB, a state television outlet, reported that the explosion happened first, followed by gunfire from attackers.

The technology is not actually that far-fetched, according to intelligence and security experts who spoke with CNN — but they are skeptical that such a sensitive and precise operation would have been carried out remotely.

A remote operation carried out from a distance certainly has its advantages, but three experts suggest that it introduces more risk factors into an operation with little apparent room for error.

“Generally speaking, it (a remote weapon) is a device that can be effective in certain circumstances,” said an Israeli security expert who wished to remain anonymous because of the sensitivity of the issue.

“You solve the problem of getting too close to the target,” he explained. “It’s accurate enough. You can practice a lot. And you can create a stable situation when there are lots of moving parts.”

Iran claims it has evidence that Israel was behind the assassination of Fakhrizadeh, one of the country’s top nuclear scientists, but it has not presented any of its evidence, and Israel has not claimed responsibility. Prime Minister Benjamin Netanyahu’s office has refused to comment on Fakhrizadeh’s death.

If the assassination was carried out remotely, either from another country or from a distance of a few kilometers, it would have been immensely complex, with much of the risk coming before the killing itself happened.

A country or actor would have to smuggle in valuable technology, including communications relays, satellite receivers and a weapon that could be operated remotely, experts say. To avoid immediate detection, the equipment would probably have to be smuggled in piecemeal and assembled once inside Iran. Throughout the process, the equipment would have to be secretly stored somewhere.

Fars claims the vehicle used in the assassination exploded, so some sort of remotely-activated explosive would also have to be stored securely.

During the operation itself, none of this equipment could fail, since there would be no one on site to fix it. A communications failure. A jammed gun. A self-destruct device that didn’t detonate. Any single failure could compromise the entire assassination and leave the technology on the side of the road for Iranian security forces to intercept.

“I don’t think that (a remote-control gun) was used there,” said the security expert. “I think the Iranians published that to minimize the scale of the group who did it and the scale of penetration into the country by operational elements.”

But he said that a remote assassination “is not fantasy, it is a good idea.”

The technology to fire at a target from a remote-controlled vehicle is not particularly new. Rafael, an Israeli defense company specializing in weapons, sells its Samson 30 Remote Weapon System to more than 25 other countries, and, while it is much too large to fit in a Nissan, this is hardly the only such system on the market. Germany, Spain, the United States, Australia and others all manufacture similar systems.

“It is something we already have in the military,” said retired Brig. Gen. Nitzan Nuriel, a former director of Israel’s Counter-Terrorism Bureau, noting it does not mean Israel was responsible for the assassination.

“We do have a machine gun controlled from far away,” he said. “We have observation abilities around Gaza which also have the ability to shoot, and it is controlled from afar. It is not something you have to have someone in place in order to do.”

Jack Watling, a defense expert at the Royal United Service Institute, told CNN the main use for such technology is “area denial,” which he said “means trying to, for example, engage all targets within a defined area (where) people are not supposed to be.”

Watling said such technology would not be effective for a precision strike against a single target. “That wouldn’t work in this case,” he said, explaining that while the ability to pinpoint a target with an automated weapon is “theoretically possible, it could potentially target something that you don’t want it to.”

He said previous assassinations blamed on Israel have been carried out using much simpler methods, such as bombs placed on cars by assailants on motorcycles — as in the case of Majid Shahriari in 2010 — or drive-by shootings, as in the case of Daryoush Rezaie in 2011. Israel has never claimed responsibility for the killing of Shahriari or Rezaie.

“An assassination, when it’s carried out, you want it to be as reliable as possible,” Watling said. “Lots of planning involved, lots of intelligence to understand the movement of the vehicle and when they can get close, but they’ve tried to use very, very simple methods in the past.”

“There is always a great deal of conspiracy and speculation about these events, and unless hardware are presented then I think, while plausible, we shouldn’t automatically assume it is as described (by Iranian media),” he said.

Iran claims it has evidence the weapon used in the attack and collected at the scene “bear the logo and specifications of the Israeli military industry,” according to Iran’s state-run Press TV, citing an unnamed source. But Iranian officials have yet to display that evidence or show pictures that would confirm their assertion that Israel was involved in the assassination.

The head of the secretary of Iran’s Supreme National Security Council, Rear Adm. Ali Shamkhani, said the operation was complex and used electronic equipment with no one at site, the state-run Islamic Republic News Agency said.

“The operation was very complex, using electronic equipment and no one was present at the scene,” Ali Shamakhani told state TV.

But there is one decidedly low-tech detail on which the entire operation rests. Fakhrizadeh chose to leave the protection of his bulletproof car after it was hit by gunfire, Fars and other Iranian news agencies assert, and it was only at this point that he was shot and killed. A complex assassination, which must have required months of planning and years of intelligence gathering, appears to rely on this very moment, if one is to believe Iranian media, and would have failed entirely if Fakhrizadeh had only stayed inside his vehicle.

Israeli military journalist Yossi Melman, the author of “Spies Against Armageddon,” about Israel’s history of espionage, dismissed Iranian accounts of the killing.

“I stopped believing the reports from the official and semi-official media in Iran regarding the circumstances around the assassination of Fakhrizadeh,” he said on Twitter. “They are publishing various and even contradictory details: Assassins? Motorcyclists? A booby-trapped car? A machine gun that fires automatically? It seems to me that Iranian and Israeli intelligence to which this is attributed deals with psychological warfare, disinformation, and the obstruction of evidence.”