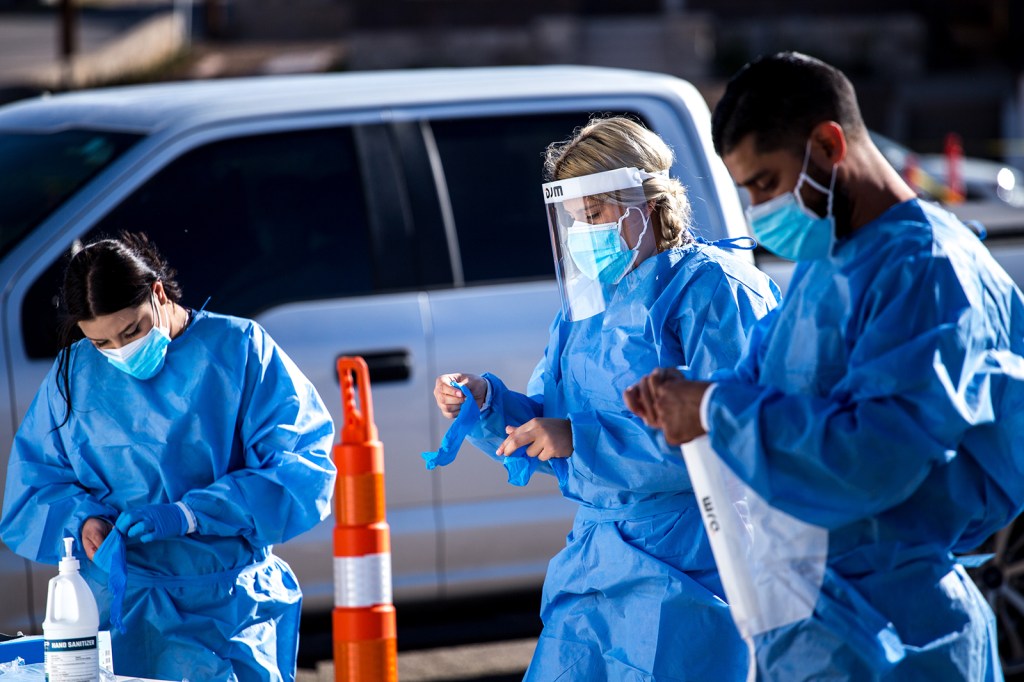 As the coronavirus fall surge continues to wreak havoc across the US, health care workers are describing scenes of depleted resources at medical facilities and are reporting they are overwhelmed.

There have been at least 160,000 daily new coronavirus cases in the US, according to Johns Hopkins University data. This is the highest single day reported total since the pandemic began.

The US has added more than half a million new Covid-19 cases since hitting 10 million on Monday, the school said.

At this rate, the number should pass 11 million in the next four days, making for the fastest addition of another million yet, Johns Hopkins data show.

“It’s well above what we can tolerate right now and still save lives. I don’t know why it’s continuing to get worse. From a health care standpoint, we’re tapped out,” Dr. Ashok Rai, Prevea Health president and CEO in Wisconsin, told CNN affiliate WBAY-TV on Thursday as he discussed hospitals in his state.

November already was crippling for American communities battling Covid-19 spikes in cases, hospitalizations and deaths. Experts warn it will likely get worse before it gets better.

Dr. Carlos del Rio, an Emory University infectious disease expert, said Friday he’s more concerned about capacity at hospitals than he is about the shortage of personal protective equipment (PPE).

What people do now during the pandemic will have a “profound impact” on controlling the spread of the virus, said Dr. Vivek Murthy, co-chair of President-elect Joe Biden’s newly appointed transition coronavirus advisory board.

“This is a very, very important moment for us,” Murthy said, noting that surges were seen after both Memorial Day and Labor Day weekends. “We’re at a point now, even pre-Thanksgiving, where we are surging beyond any level that we have seen over the last eight months.”

For the 10th day in a row, the US reported more than 100,000 infections, and the total since Monday hit 556,961. On Thursday, with its highest number yet at more than 153,000 new infections, the country inched closer to what one expert predicted could soon become a devastating reality — 200,000 cases a day.

As of Friday, at least 10.7 million cases and more than 244,000 deaths in the US have been recorded, according to Johns Hopkins.

Two states this week surpassed 1 million total Covid-19 infections. For the third consecutive day, the country set a record for hospitalizations, which now total more than 67,000.

The jump in cases is causing states to bring back restrictions not seen since the spring. Idaho Gov. Brad Little announced Friday the state was rolling back to stage two of its reopening, which prohibits gatherings of more than 10 people indoors and outdoors with the exception of religious and political gatherings.

In Oregon, Gov. Kate Brown announced a statewide “two-week freeze” Friday. The freeze limits social gatherings to a maximum of six people, closes restaurants and bars for in-person dining and limits capacity of faith-based gatherings to a maximum of 25 people indoors and 50 outdoors. Retail and grocery stores will also be limited to 75% capacity while gyms, indoor and outdoor recreation facilities and event venues will be closed.

“I know it’s hard and I know everybody is weary but we are trying to stop this ferocious virus from spreading,” Brown said.

Maine Gov. Janet Mills announced Friday that residents from Massachusetts will no longer be exempt from Maine’s quarantine restrictions for out-of-state travel. This means that starting Monday, Massachusetts residents wanting to enter Maine will have to quarantine for 14 days or provide a negative test with a sample taken within two days before arrival. Vermont and New Hampshire residents are still exempt from Maine’s quarantine restrictions, though, Mills said.

‘Less is more this Thanksgiving’

Public health measures touted by officials for months — including face coverings, social distancing and regular hand washing — could provide much needed help. More than 17,000 lives could be saved by the end of the year if 95% of Americans wore face masks, according to projections from the Institute for Health Metrics and Evaluations in Seattle.

“If we do the things that are simple public health measures, that soaring will level and start to come down,” Dr. Anthony Fauci, director of the National Institute of Allergy and Infectious Diseases, told CBS “This Morning” on Friday.

If Americans lower their guard, “We’ll continue to soar,” Fauci said, advising people to wear their masks at Thanksgiving gatherings as much as possible.

“Separation should be the norm” this Thanksgiving, Dr. William Schaffner, professor of infectious diseases at Vanderbilt University, said Thursday. “We don’t want to give the virus while we’re giving thanks.”

Vermont Gov. Phil Scott announced Friday that starting Saturday at 10 p.m. public and private gatherings of different households are banned. Bars must close by 10 p.m., and restaurants can offer only takeout after 10 p.m. All youth recreational sports will also be banned for the time being, he said.

Scott said there will be no enforcement of the ban on multi-household gatherings. But he hopes residents will abide by an honor system. If these gatherings still happen and produce outbreaks, more stringent enforcement could occur, he said.

He announced an additional 84 new Covid-19 cases Thursday, compared to an average of 25 cases per day last week. No additional deaths were reported, Scott said.

Illinois reported more than 15,000 cases for a new record, and its highest number of hospitalizations.

In Wisconsin, “It’s well above what we can tolerate right now and still save lives,” Prevea Health President and CEO Dr. Ashok Rai told affiliate WBAY. “From a health care standpoint, we’re tapped out.”

As bars, restaurants, and gyms prepare for the first night with a 10 p.m. state-mandated curfew, New York City Mayor Bill de Blasio said that the closure of these establishments needs to be “reassessed.”

“Even though the state makes the ultimate decisions here on the industry issues, I’m very cognizant of the fact that we have to keep people’s livelihoods in mind here,” he said Friday morning on WNYC’s “The Brian Lehrer Show.”

De Blasio suggested that holiday travel will have more impact on shaping further response to the pandemic. “We talk about restaurants or gyms, but much more decisive will be if we can successfully limit travel and limit indoor gatherings” during the holidays.

De Blasio also said the city’s schools could be shut down “as early as Monday,” citing rising Covid-19 case numbers.

New York City Schools Chancellor Richard Carranza issued a letter to principals asking them to be prepared for a brief time of fully remote learning, system-wide.

Researchers also now say they’ve found more evidence that a mutant version of the coronavirus that has overtaken an older strain to spread across much of the world is more easily transmitted — but does not appear to be any more dangerous.

And it hasn’t changed its physical shape so should be just as vulnerable to the body’s immune response whether natural or induced by a vaccine.

The team’s findings validate earlier studies that showed the new strain spreads more easily and also supports evidence the mutation hasn’t made the virus more likely to cause severe disease. The mutation might help the virus thrive better in the nose and upper respiratory tract, which would help it spread.

Meanwhile, a top US official said Thursday every American who wants to get a vaccine will be able to do so by April. President Donald Trump repeated that sentiment Friday during an Operation Warp Speed announcement at the White House.

“Initially, in December and January, we’re going to be having very targeted vaccinations, also helped in large part by some of our largest chains, like Walgreens and CVS,” US Health and Human Services Secretary Alex Azar told CNN.

There will likely be enough vaccines for “all of our most vulnerable citizens” to get vaccinated in December, he said, followed by “all of our senior citizens, as well as our emergency first responders and our health care workers” in January.

Trump called out New York Gov. Andrew Cuomo Friday, saying the the federal government will need Cuomo’s approval before it can start distributing a coronavirus vaccine next year. At that point, President-elect Joe Biden, not Trump, will be president and in charge of distributing a potential vaccine.

Cuomo said Trump’s comments were false, adding that New York and seven other states have established scientific panels to independently approve any vaccines greenlighted by the US Food and Drug Administration.

While the US doesn’t yet have an authorized Covid-19 vaccine, drugmaker Pfizer announced Monday that early data on its vaccine shows it is more than 90% effective. Officials widely expect the company to be able to apply for emergency use authorization by the end of the month.

Any eventual coronavirus vaccine will be distributed across the states and territories based on population, a top Operation Warp Speed official said Friday. The operation is part of the Trump administration’s vaccine initiative.