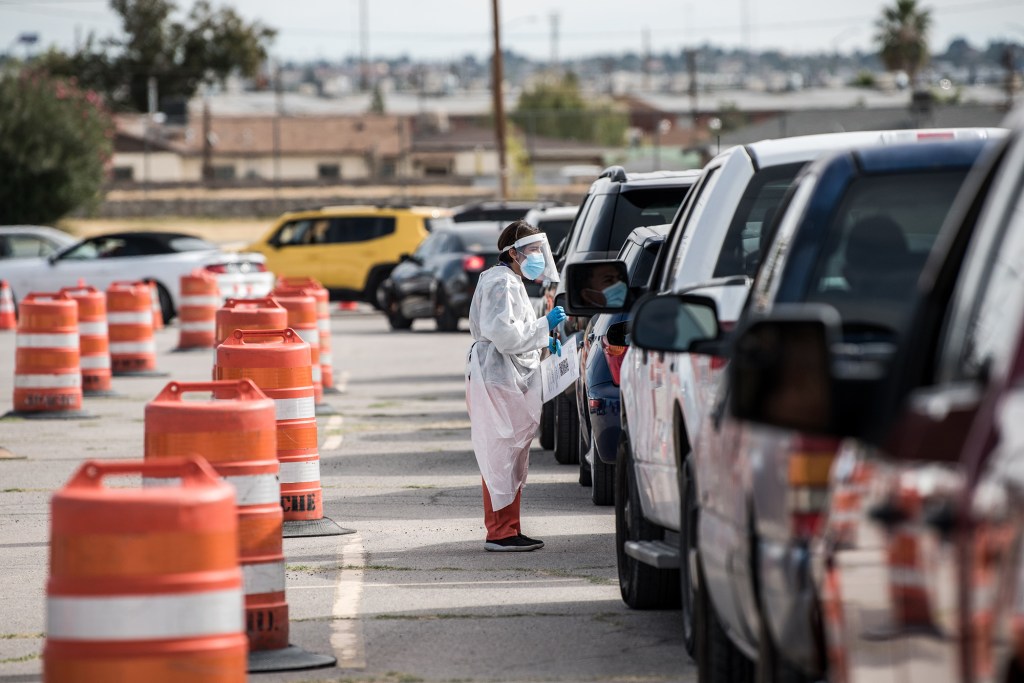 THE US JUST SET A STAGGERING NEW COVID-19 DAILY CASE RECORD WITH MORE THAN 120,000 INFECTIONS

The US set a grim new Covid-19 record Thursday — following a week marked by high case numbers — surpassing 120,000 infections in a single day.

And it was the second day in a row the country reported more than 100,000 infections.

Health experts had warned weeks ago that the nation’s daily cases would reach six digits, but those alarming figures hit sooner than expected. And Covid-19’s death toll could reach 266,000 by the end of November, according to an ensemble forecast published Thursday by the Centers for Disease Control and Prevention.

Thursday saw at least 118,629 new cases nationwide, according to Johns Hopkins University. There were at least 1,187 reported deaths, a near 20% increase from the same day last week.

As the US continues to shatter daily case records, so too do states across the nation: Colorado, Illinois, Minnesota, Pennsylvania, Utah and Wisconsin are among those that set new daily records for infections on Thursday.

As the pandemic continues to escalate, some officials are enacting new rules to try to control the virus’ spread.

Ohio on Thursday saw a record number of new coronavirus infections, and it also reported its highest numbers of hospitalizations and people in intensive care. The state reported 4,961 new Covid-19 cases, with 2,075 people hospitalized and 571 in the ICU.

Every county in the state is seeing significant community spread, said Gov. Mike DeWine, who attributed the rise in cases to weddings, funerals and other social gatherings.

Utah hit a daily record with 2,807 new coronavirus cases, with a rolling seven-day average of 1,943 cases. That’s up from last week, when the seven-day average was 1,578, according to state epidemiologist Angela Dunn.

Gov. Gary Herbert said the report was “grim news and it’s discouraging.” He warned that the state would see even higher numbers in the coming weeks unless residents changed their behavior.

But he added that he didn’t want to close businesses to curb the spread.

“We think that’s maybe the wrong direction to go,” he said. “Maybe some modifications of behavior that need to take place to keep those businesses open.”

And in Minnesota, there were nearly 4,000 new infections on Thursday — making it the third day in a row the state broke a daily high of new cases. The state’s health department also reported nine days in a row where more than 100 new people were hospitalized with coronavirus.

The battle over a shutdown

El Paso, Texas, reached a record-high number of hospitalizations Wednesday, with at least 1,041 Covid-19 patients hospitalized in the city.

Coronavirus is spreading so rampantly in El Paso County that a fourth mobile morgue was headed to the area this week.

County Judge Ricardo Samaniego, the top government official in the county, ordered a two-week shutdown of all nonessential services last week. Without such measures, he said, “we will see unprecedented levels of deaths.”

But the Texas attorney general said his office has filed a motion for a temporary injunction to stop the judge’s “unlawful lockdown order, which flies in the face of Gov. Greg Abbott’s executive orders on COVID-19.”

Abbott said Samaniego “illegally” shut down businesses. He said the county judge “made it clear that he had not been enforcing existing protocols allowed under law” that could help curb the virus “while allowing businesses to safely open.”

From curfews to mask mandates to crowd control, other state and local officials are scrambling to control Covid-19 during what doctors say will be the worst surge yet.

Massachusetts Gov. Charlie Baker announced a stay-at-home advisory earlier this week that will be going into effect from 10 p.m. to 5 a.m.

Baker also announced new restrictions around gatherings and a new closing time for indoor facilities, theaters and other venues.

Gov. Ned Lamont also recommended residents stay home between 10 p.m. to 5 a.m. to limit the spread through social gatherings — a primary source of infection during this fall surge.

Employed adults who tested positive for Covid-19 were almost twice as likely to report regularly going to a workplace than those who tested negative, according to research published Thursday in the Centers for Disease Control and Prevention’s Morbidity and Mortality Weekly Report.

Of 248 participants who reported their telework status in the two weeks before illness onset, those who had positive Covid-19 test results were more likely to report going exclusively to a workplace.

The findings highlight socioeconomic differences among participants who did and did not telework, the authors wrote. Non-White employees and those who earned less had less opportunity to telework.

“Allowing and encouraging the option to work from home or telework, when possible, is an important consideration for reducing SARS-CoV-2 transmission,” the authors wrote.

When teleworking isn’t possible, worker safety measures should be scaled up, they said.

THE US JUST SET A STAGGERING NEW COVID-19 DAILY CASE RECORD WITH MORE THAN 120,000 INFECTIONS