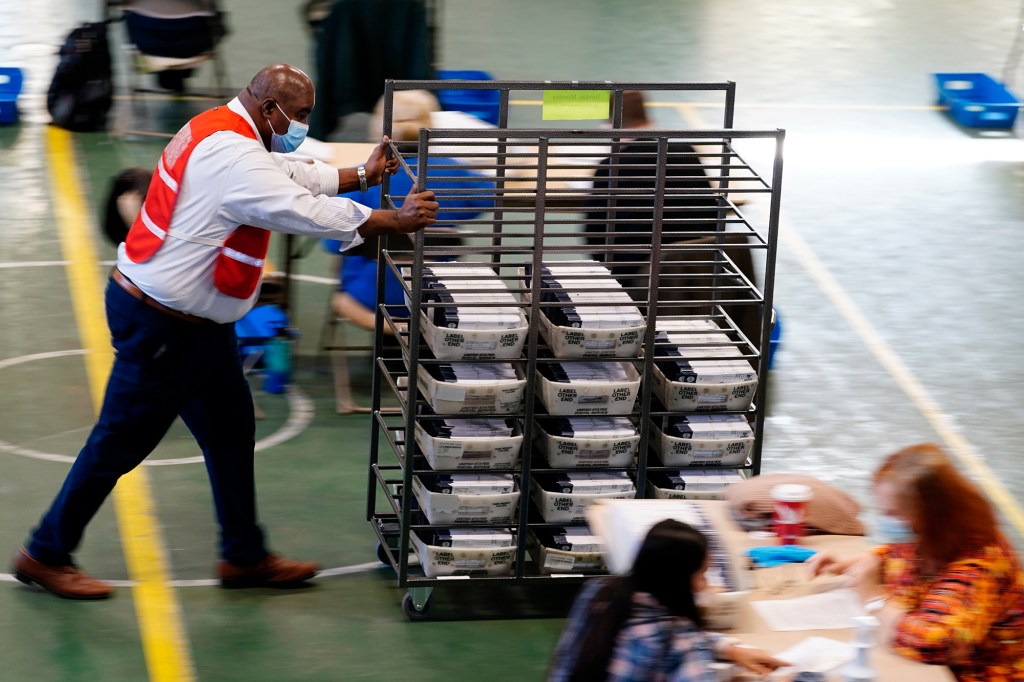 The presidential race between President Donald Trump and former Vice President Joe Biden remains on a razor’s edge as election workers in key states continue to plow through ballots.

Here’s what’s happening in each state:

Arizona had about 285,000 outstanding ballots left to count as of 9:30 p.m. ET, according to the Arizona Secretary of State’s Office.

Maricopa County, the state’s most populous, reported another batch of absentee votes at 9 p.m. ET on Thursday. The county, which includes Phoenix, still had about 204,000 mail-in ballots to count, 16,000 provisional ballots to process and 5,600 early votes to verify.

Secretary of State Katie Hobbs told CNN on Thursday afternoon that if Maricopa County maintained the pace it had set Wednesday — tallying 140,000 ballots in a single day — “we will have a much more clear picture of where things stand” in the presidential contest in Arizona by Friday evening.

Another 46,000 ballots were outstanding in Pima County, home to Tucson, Hobbs said.

There were about 16,000 votes that remained to be counted in Georgia at 8:40 p.m. ET Thursday, according to a statement from Secretary of State Brad Raffensperger.

Trump’s lead kept dropping as more ballots were counted Thursday, and he was then ahead by fewer than 2,500 votes. Sixteen electoral votes hang in the balance.

Earlier in the afternoon, state official Gabriel Sterling had stressed the need for patience in the interest of accuracy.

“The effort here is to make sure that everybody’s … legal vote is counted properly,” Sterling told reporters. “These close elections require us to be diligent and make sure we do everything right.”

The Nevada secretary of state said some 190,150 ballots statewide remained to be counted, 90% of which came from Clark County, home to Las Vegas.

In a news release issued Thursday afternoon, Secretary of State Barbara Cegavske offered her first full accounting of votes since Election Day. Of the remaining uncounted ballots in Nevada, 123,554 were either returned by mail or dropped off in person at a ballot drop-off location.

The remaining 66,596 were ballots that were cast in person at a polling place, either during early voting or on Election Day, by voters who took advantage of Nevada’s new same-day voter registration law.

Clark County has about 70% of all of Nevada’s active registered voters.

In addition to the 190,150 uncounted ballots statewide, an additional 2,500 provisional ballots need to be approved by Friday.

It’s hard to determine how many ballots are outstanding in Nevada because the state is one of a handful that mailed ballots to all active registered voters. Election officials will count mail-in ballots received through November 10, as long as they were postmarked by Election Day.

Trump leads in North Carolina by more than 75,000 votes, with an estimated 95% reported. The state is not expected to report any additional results until next week.

To finish its count, North Carolina is waiting to see if 116,000 outstanding requested absentee ballots are returned by November 12. In North Carolina, an Election Day-postmarked ballot can be counted if it is received by 5 p.m. ET on November 12.

But the state still does not know how many of those 116,000 voters chose to instead vote in person or to drop off their ballots on Election Day, so the number of potential outstanding votes could shrink.

In Pennsylvania, where 20 electoral votes are at stake, about 250,000 ballots remained to be counted, with less than 10% of the state’s absentee ballots remaining, according to data posted on the state’s official election site.

Philadelphia County had approximately 72,000 mail-in ballots left to count as of 8:15 p.m. ET Thursday. Bucks County, northeast of Philadelphia, had about 14,500 votes outstanding.

Mail-in ballots continue to arrive in Pennsylvania, where state law allows election officials to receive and count mail-in ballots that are received by Friday, so long as they were postmarked by Election Day. Secretary of State Kathy Boockvar has instructed counties to segregate and count ballots arriving between 8 p.m. ET November 3 and before 5 p.m. November 6 in light of a possible legal challenge from the Trump campaign.

But speaking on CNN Thursday afternoon, Boockvar said the post-Election Day ballot numbers could have a marginal impact on the outcome. “It’s not a huge number,” she said. “So, I think, no matter what happens, I don’t think it’s going to be a tremendous impact on this race.”

Allegheny County officials had told CNN earlier in the day that they had received around 500 post-election ballots and estimated another 10,000 to 15,000 provisional ballots were left to be processed. Allegheny County includes the city of Pittsburgh.

Allegheny officials will not count any more ballots until Friday because of a court order over some 29,000 disputed ballots, according to county officials. But the county will be preparing for a resumption Friday of the counting. “They’re processing them. No one has the day off. They’re working,” Allegheny Executive Rich Fitzgerald told CNN.

HERE'S WHY THE VOTE COUNT IS STILL GOING IN KEY STATES