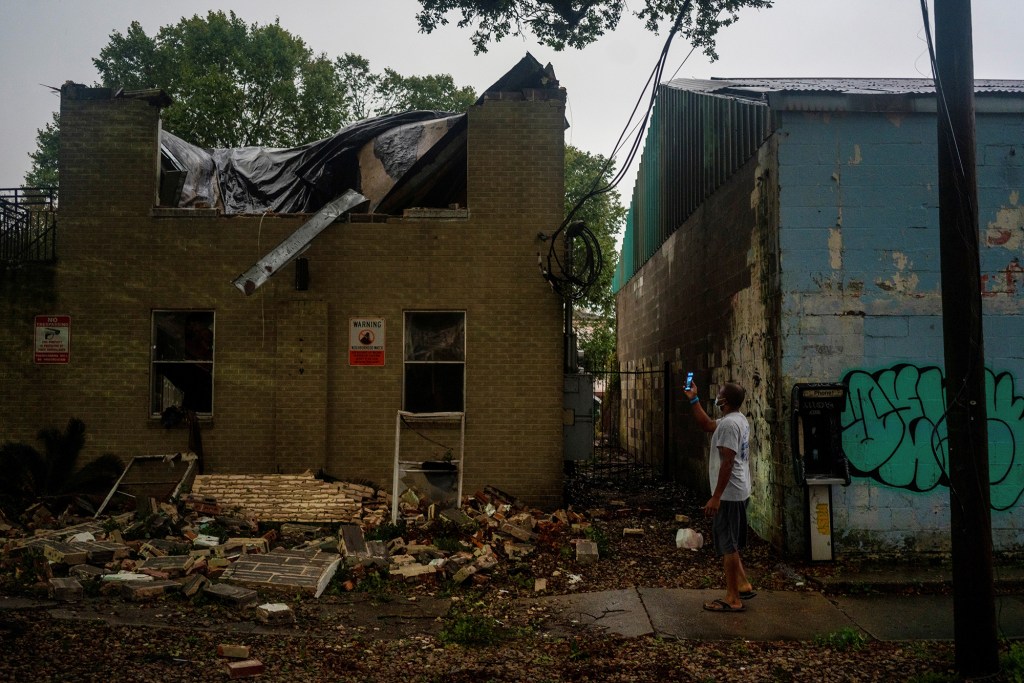 Zeta Leaves Over 2.1 Million Customers Without Power And At Least 6 Dead After Battering Gulf Coast

At least six people have died and more than 2.1 million customers are without power Thursday after former Hurricane Zeta hit the Gulf Coast and rushed inland.

Zeta — the 27th storm of the Atlantic hurricane season — made landfall in Louisiana as a Category 2 storm Wednesday before weakening to a post-tropical cyclone by Thursday afternoon.

The storm was still packing winds of 50 mph as of 5 p.m. ET Thursday as it approached the southern tip of New Jersey. But the storm was forecast to move out over the western Atlantic later Thursday night, according to the National Hurricane Center.

Still, the hurricane center warned that strong gusts were still possible in parts of eastern North Carolina and southeastern Virginia throughout the evening.

States in the Mid-Atlantic could expect to see heavy rainfall Thursday evening, the hurricane center said, with the possibility of some flooding.

Louisiana Gov. John Bel Edwards said Thursday that Zeta made landfall as an “extremely strong” Category 2 storm, and it was just 1 mile per hour short of qualifying as a Category 3.

The first death attributed to Zeta was reported Wednesday, when a 55-year-old man was electrocuted by a downed power line, the Louisiana governor’s office said, citing the Orleans Parish coroner.

Around 500,000 people in Louisiana were without power Thursday morning, including two-thirds of New Orleans residents, according to Christina Stephens, the deputy chief of staff for the governor.

Officials asked people to stay off the roads due to downed power lines with possible live wires. There were no reports of significant flooding in the city, according to local officials. But there was coastal flooding and some vessels broke loose from barges, damaging bridges.

The governor’s office said the damaged bridges would be inspected to determine whether they are passable.

Power outages also presented problems for polling places, and Edwards said restoring power to those locations was a priority. A task force has been formed to ensure there are alternate polling places for those that remain out of service, the governor said.

Officials in Jefferson and Terrebonne parishes had issued mandatory evacuation orders ahead of the storm for coastal areas and places outside major levees. In New Orleans, voluntary evacuations were called for similar areas.

Zeta was mainly a wind event, Gov. Edwards said. Grand Isle along the Louisiana coast suffered the most damage, he said, but flooding damage was mostly due to storm surge and not rainfall.

Louisiana is still recovering from the damage caused by recent storms, including Hurricanes Laura and Delta. On Thursday, Gov. Edwards said that of the 3,394 residents being sheltered, only 76 evacuated due to Zeta.

Most of the evacuees have been displaced since August from Laura and have been spread among six hotels in New Orleans, the governor’s office said.

Edwards said more than 1,500 National Guard members had been activated and more than 5,000 linemen were staged to begin recovery and power restoration efforts Thursday morning.

At least 32.7 million people from the Gulf Coast toward the Carolinas had been under Tropical Storm warnings earlier Thusday morning. The last time metro Atlanta was under such a warning was October 2018 as Hurricane Michael passed over the region.

As Zeta moved inland across the South, it caused substantial power outages across several states. More than 1.7 million utility customers were still without power in the dark in Georgia, Louisiana, Alabama and North Carolina Thursday afternoon, according to PowerOutage.US.

One man was killed in Georgia Thursday morning when a large oak tree fell onto a mobile home in Cherokee County, about 40 miles north of Atlanta, according to Captain Jay Baker of the county sheriff’s office.

“At about 4 a.m., the wind picked up, trees started falling,” he said. “The tree was uprooted.”

Three other adults and a child were also in the mobile home at the time, Baker said, but they were uninjured.

Two people were killed when a tree fell over their bed in their Gwinnett County, Georgia, home, according to local fire and emergency officials. Firefighters, police and rescue personnel were on scene working to recover the bodies, officials said.

In Mississippi, Biloxi resident Leslie Richardson, 58, also died because of Zeta, per Harrison County Coroner Brian Switzer. Richardson drowned after he was videotaping the waves at a Biloxi marina, Switzer told CNN.

Richardson and another man were recording the waves when they became surrounded by rising water, Switzer said. Richardson called 911 and both men swam to a tree, where they held on for a while.

Ultimately, Richardson was overtaken by storm surge and drowned, Switzer said. The other man survived.

An Alabama man died Thursday after a large pine tree fell through his mobile home in Morvin, an unincorporated community in Clarke County, said Roy Waite, the country’s EMA director.

The National Weather Service in Mobile, Alabama, said early Thursday on Facebook that it had received reports from local officials of “significant to MAJOR damage” in Clarke County, about 80 miles north of Mobile.

The order won’t apply to law enforcement or employees traveling to and from work, the mayor’s account said.

Alabama Gov. Kay Ivey declared a state of emergency earlier this week. On Wednesday, she asked residents to finish storm preparations quickly and warned that even the central part of the state could see tropical storm winds.

Before turning its path toward the US coast, Zeta struck the Yucatán Peninsula in Mexico on Monday night as a Category 1 hurricane.

Zeta is the 27th storm of the Atlantic hurricane season, one shy of tying the record for the most storms in a season. There were 28 storms in 2005, including 15 hurricanes.

Zeta Leaves Over 2.1 Million Customers Without Power And At Least 6 Dead After Battering Gulf Coast