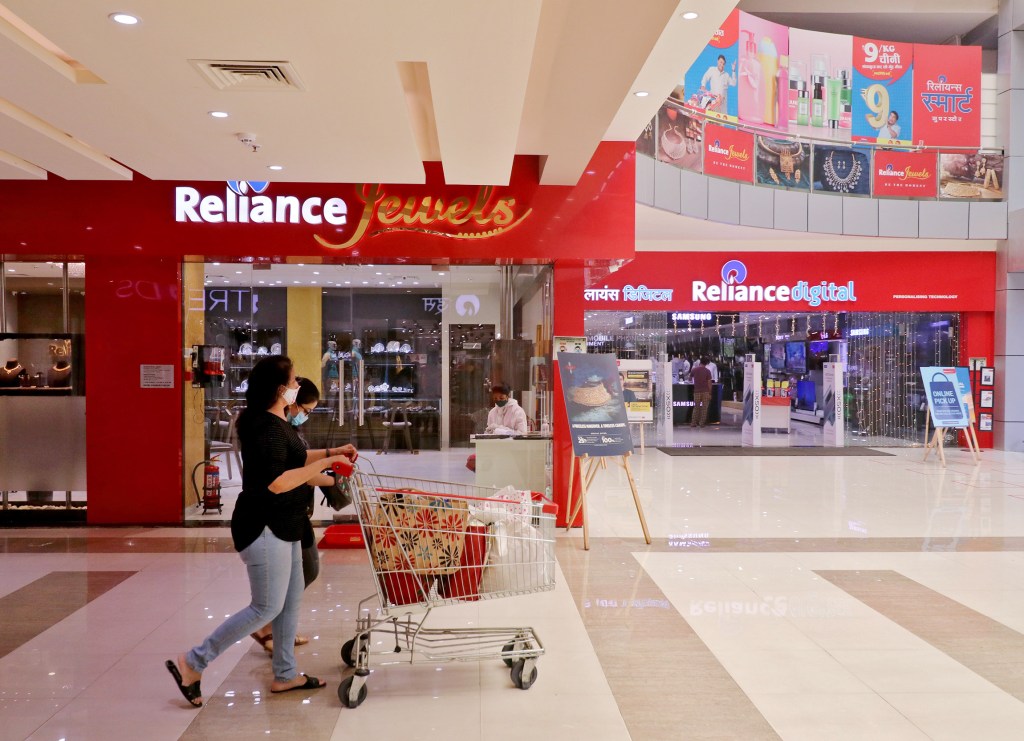 Two of the world’s richest men are duking it out over a brick-and-mortar retail chain on the verge of default. But when it comes to the fight for India’s growing e-commerce market, every battle counts.

What’s at stake is strategic access to a network of popular grocery stores and retail shops in India — something both Amazon and Reliance want to either have for themselves, or to prevent the other from acquiring.

“If someone backs down, it will give the impression that one has lost and the other has won, when the fight has just started,” said Counterpoint Research analyst Tarun Pathak.

Amazon has 31.2% market share in India’s e-commerce industry, just behind Walmart-owned Flipkart’s 31.9%, according to a recent report from market research firm Forrester. But Ambani has made no secret of his ambitions to upend the market with JioMart, which is part of his sprawling conglomerate.

Then Covid-19 hit. India enforced one of the strictest nationwide lockdowns, ordering shops to shutter and millions of people to stay indoors for months.

The pandemic has had a “significant adverse impact” on Future Retail’s business operations, the company said in its most recent earnings report. In July, Future Retail’s credit rating took a hit after it missed a bond payment. Fitch Ratings downgraded Future Retail’s rating two notches to C, signaling that the company was “near default.”

The following month, Reliance and Future Group announced that Reliance was buying Future Retail and several other assets. The deal allowed Future Group to “achieve a holistic solution to the challenges that have been caused by Covid and the macro economic environment,” Kishore Biyani, Future Group CEO, said in a statement at the time.

“Everyone knew Amazon had a stake in Future Retail, and the deal didn’t mention what would happen to Amazon’s stake,” said Satish Meena, analyst at research firm Forrester.

Amazon responded by filing a complaint to the Singapore International Arbitration Centre (SIAC).

Indian companies and foreign companies operating in India often agree to settle disputes in Singapore because “it’s a neutral jurisdiction with high integrity and international standards,” according to Ashish Kabra, a lawyer who heads the International Dispute Resolution & Investigations Practice for Nishith Desai Associates in Singapore.

The arbitration process is confidential and none of the submissions are public.

Amazon argued that the 2019 deal struck between it and the Future Group entity included a non-compete clause, a person familiar with Amazon’s perspective told CNN Business. The clause listed 30 restricted parties with which Future Retail and Future Group could not do business, and Reliance was on that list, the person said.

“The key question really is what’s the validity of contracts if you just ignore them,” said the person familiar with Amazon’s side.

“Are companies just going to ignore contracts and do what they please?”

A SIAC emergency arbitrator gave Amazon a small victory this week when it ordered a temporary halt on Future Group’s deal with Reliance, according to the legal order seen by Reuters, which has not been made public.

Future Group had argued that if the deal with Reliance falls through, its retail unit will be forced into liquidation and 29,000 people will lose their jobs, according to Reuters, which cited the Singapore order. The order is not public, but the person familiar with Amazon’s perspective confirmed that Future presented this argument.

But the arbitrator ruled that “economic hardship alone is not a legal ground for disregarding legal obligations,” according to the order, Reuters reported.

“We welcome the award of the Emergency Arbitrator. We are grateful for the order which grants all the reliefs that were sought,” an Amazon spokesperson said in a statement.

Future Retail said it “is examining the communication and the order” from SIAC.

Reliance (RRVL) said in a statement that its deal with Future Retail is “fully enforceable” under Indian law.

“RRVL intends to enforce its rights and complete the transaction in terms of the scheme and agreement with Future group without any delay,” said the statement.

But in the past, Indian courts have usually followed the lead of orders passed by emergency arbitrators outside of India, according to Kabra, the lawyer.

“What parties have previously done, is they approach Indian Courts and ask for similar reliefs in India, while relying on the order of the Emergency Arbitrator. Indian Courts usually grant the same relief,” said Kabra.

A ‘clash of the titans’

For Reliance, which operates 11,000 stores throughout India, and Amazon, the No. 2 e-commerce player in the country, Future Retail’s 1,500 stores are not a must have, says one analyst.

“It’s not like without it you can’t have your ambitions, if you don’t have Future [Retail],” said Pathak, of Counterpoint Research.

This is “less about Future and more about the clash of the titans,” as well as “protecting your turf,” he added.

To compete with Amazon and Flipkart, Ambani’s JioMart has been growing its presence in India. It expanded to hundreds of cities across India earlier this year and plans to branch into electronics, fashion, pharmaceutical and healthcare soon. The company will also likely tap into Reliance Retail’s network of physical stores across the country to fulfill online orders, according to analysts.

The industry had expected Amazon and Reliance to forge some kind of deal in the future, because they need each other’s expertise, according to Meena, of Forrester. Amazon needs more shops to expand inventory and use retail spaces as storage and delivery hubs. And Reliance doesn’t have a lot of experience in e-commerce, according to Meena.

But any kind of partnership between Amazon and Reliance in the future “depends upon how much bad blood is between them now,” said Meena.

“It might end up becoming an ego battle between the CEOs of both the companies,” he said.