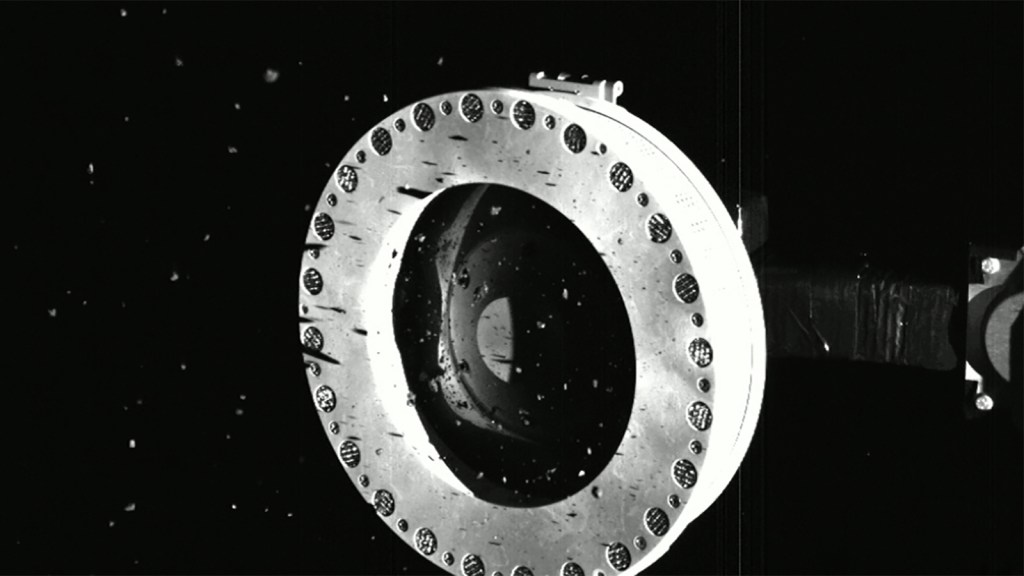 The historic collection of a sample from the near-Earth asteroid Bennu by NASA’s OSIRIS-REx spacecraft on Tuesday was almost too successful.

Some of the sample is leaking into space, according to Dante Lauretta, OSIRIS-REx principal investigator at the University of Arizona in Tucson during a NASA press conference Friday.

“The big concern now is that particles are escaping because we’re almost a victim of our own success,” he said. “Large particles left the flap open. Particles are diffusing out into space. They aren’t moving fast, but nonetheless, it’s valuable scientific material.”

The mission team analyzed images Thursday taken of the collector head of the spacecraft that showed that a substantial sample was collected — but there is so much material in the head that the flap designed to keep the sample inside is jammed.

This is allowing particles to escape into space. The mission team is changing the course of the events planned for the spacecraft this weekend and planning to stow the sample as quickly as possible so little material is lost. The researchers estimated that it’s continually losing between 5 to 10 grams of material. This flaky material floats in what resembles a cloud of particles around the head.

But the team isn’t sure of the exact loss rate because it’s not steady.

The mission was required to collect at least 2 ounces, or 60 grams, of the asteroid’s surface material. Based on the images they analyzed, the researchers are confident that the collector head on the end of the spacecraft’s robotic arm actually captured 400 grams of material. And that’s only what’s visible to them through the perspective of the camera.

But particles are escaping through small gaps where a Mylar flap, or lid, is being held open by at least a centimeter by large rocks. And the activities planned for the spacecraft this weekend could cause more sample loss due to movement.

Previously, OSIRIS-Rex was expected to conduct a braking burn on Friday and a measurement of the sample’s mass on Saturday. Although this means the team won’t know the true mass of the sample until it returns to Earth in 2023, the mission team is confident that it will have a sufficient sample.

“We are working to keep up with our own success here, and my job is to safely return as large a sample of Bennu as possible,” Lauretta said. “The loss of mass is of concern to me, so I’m strongly encouraging the team to stow this precious sample as quickly as possible.”

The team will go through another evaluation process this weekend to ensure that the sample head could be stowed in the sample return capsule by Tuesday to protect loose material and keep the precious cargo safe so it can return to Earth.

The sample head is so full because of how the collection event unexpectedly played out on Tuesday.

The collector head made direct contact during the event Tuesday — and then some. Over the course of the six seconds when the head touched down, it sank 5 centimeters into the asteroid’s surface. When the pressurized nitrogen gas bottle fired, designed to lift up material from the surface, the head sank an additional 24 to 48 centimeters into the surface material.

There is no way to shut the flap, Lauretta said. While the team is not sure of the force of the rocks holding it open, it must be strong and at the size limit for what could pass into the collection head, he said.

This is not something the team encountered in their test campaign ahead of the mission’s launch — which did include large rocks and the sample collection head being buried by the asteroid’s surface material. But the researchers didn’t test the sample head at the depth they suspect it actually reached on the asteroid.

“Bennu continues to surprise us with great science and also throwing a few curveballs,” said Thomas Zurbuchen, NASA’s associate administrator for the science mission directorate at the agency’s headquarters in Washington.

“Although we may have to move more quickly to stow the sample, it’s not a bad problem to have. We are so excited to see what appears to be an abundant sample that will inspire science for decades beyond this historic moment.”

Regardless of when the sample is stowed over the next week, the spacecraft won’t begin its journey back to Earth until March 2021, when the asteroid that is currently 200 million miles from Earth is in alignment with our planet for a more efficient trip home.

The spacecraft “remains in good health” to return to Earth, according to the team.