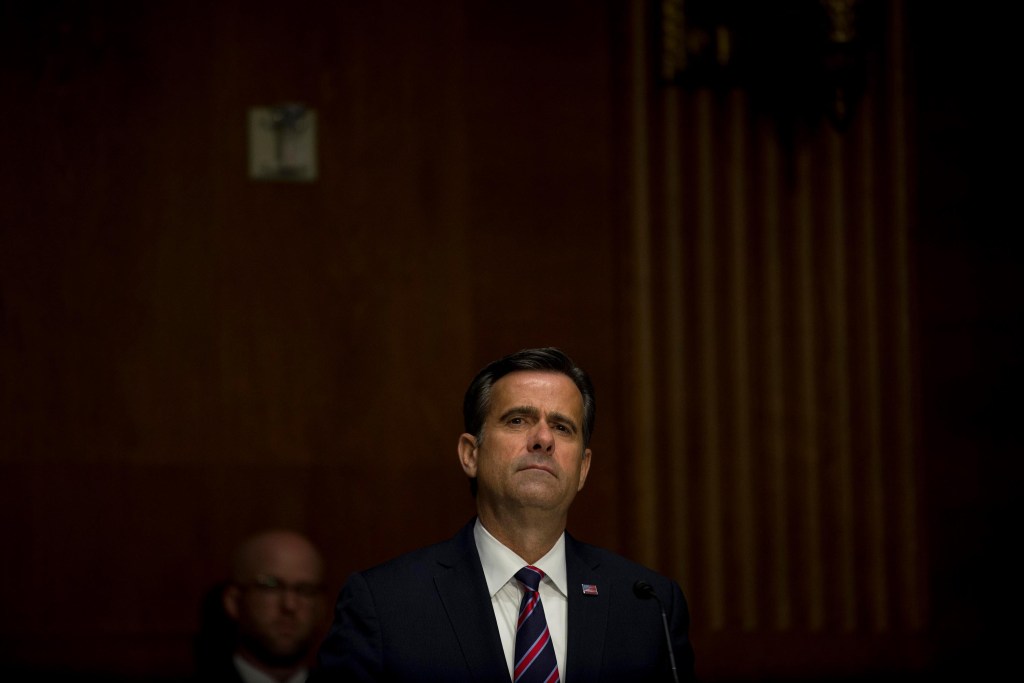 Feds Say Russia And Iran Have Interfered With The Presidential Election

Director of National Intelligence John Ratcliffe said Wednesday both Iran and Russia have obtained US voter registration information in an effort to interfere in the election, including Iran posing as the far-right group Proud Boys to send intimidating emails to voters.

Ratcliffe, appearing alongside FBI Director Chris Wray, said at a hastily arranged news conference Wednesday evening that Iran was responsible for the email campaign, made to look like it came from the Proud Boys, as well as spreading disinformation about voter fraud through a video linked in some of the emails.

“This data can be used by foreign actors to attempt to communicate false information to registered voters that they hope will cause confusion, sow chaos and undermine your confidence in American democracy,” Ratcliffe said.

“We have already seen Iran sending spoof emails designed to intimidate voters, incite social unrest and damage President (Donald) Trump,” Ratcliffe added. “You may have seen some reporting on this in the last 24 hours, or you may have even been one of the recipients of those emails.”

Ratcliffe did not explain what he meant by his statement that the emails — which were sent to registered voters from “info@officialproudboys.com” and warned recipients to “Vote for Trump or else!” — were intended to damage the President.

Democrats and a group of former intelligence officials have accused Ratcliffe, a former Republican congressman tapped to lead the intelligence community this year, of selectively declassifying intelligence in the run-up to the election to help Trump’s campaign, and Democrats on the Homeland Security Committee criticized him after the news conference.

“DO NOT listen to Ratcliffe. Partisan hack,” the committee’s Twitter account said Wednesday evening in a tweet that was later deleted. The committee followed that statement by saying, “TO CLARIFY: These election interference operations are clearly not meant to harm President Trump.”

Rep. Ted Lieu, a California Democrat, accused Ratcliffe of trying to “change the subject,” and Senate Minority Leader Chuck Schumer, a New York Democrat, told MSNBC’s Rachel Maddow, “I had the strong impression it was much rather to undermine confidence in elections and not aimed at any particular figure. And I’m surprised that DNI Ratcliffe said that at his press conference if he did.”

White House spokesman Judd Deere said in a statement that the news conference was an example of Trump putting “America first.”

“He has directed the FBI, DOJ, and defense and intel agencies to proactively monitor and thwart any attempts to interfere in US elections, and because of the great work of our law enforcement agencies we have stopped an attempt by America’s adversaries to undermine our elections,” Deere said.

Asked about Ratcliffe’s comments that the emails were aimed at damaging Trump, a senior intelligence official told CNN: “The intelligence community has assessed Iran’s intentions are consistent with Bill Evanina’s previous statements on this matter and tonight’s announcement was made with specific regard to its current activities.”

Evanina, the intelligence community’s top election security official, had said in August that Russia, Iran and China were all aiming to interfere in the 2020 election.

“The Iranians are following US politics closely and understand the background of the Proud Boys recently coming up in the presidential debate and know that sending the emails they did would cause blowback in the media that would be damaging to Trump because of these perceived violent Trump supporters threatening Democrats,” the official added.

The official was alluding to when Trump told the Proud Boys to “stand back and stand by” during the first presidential debate, a remark that drew widespread criticism.

A source familiar with the matter told CNN the government assesses that some of the data the Iranians obtained came from vendor and state systems, and was not just publicly available voter registration information. Last week, Cybersecurity and Infrastructure Security Agency warned about the vulnerability in an alert that said the agency was “aware of some instances where this activity resulted in unauthorized access to elections support systems.”

There is concern that Russia similarly accessed data but it is not clear what their intention is, the source said.

One county told CNN a foreign entity would not have to hack into an elections system in Florida to obtain registered voters’ email addresses. Kim Barton, the supervisor of elections for Alachua County, Florida, said if voters include their email addresses when they register to vote, that information can be obtained through public records requests.

Prior to being asked about foreign involvement by CNN on Wednesday, Barton said she had not learned anything about the source of the emails.

“We have been working along with the state and other agencies to ensure that our elections are safe. We are doing our part,” Barton said.

A source in a Florida election office told CNN that during an FBI briefing Wednesday, agents told them the Proud Boy email threats about voting for Trump came from a nation state — and they are seeing them across the country. The source said the agents told them these emails “were not the work of a Florida guy in his basement.”

Ratcliffe and Wray took no questions, but said they are ready to respond to foreign election interference.

“We are prepared for the possibility of actions by those hostile to democracy,” Ratcliffe said.

The intelligence official said that the news conference was arranged quickly because of early voting and the fact that millions of people are already voting “so it is important for them to remain vigilant.”

Some emails included a link to a disinformation video

The US government said Iran was also responsible for spreading disinformation about voter fraud through a video linked in some of the emails.

“Sad but true, bad actors continue their attempts to undermine confidence in the election, now with a misleading video,” Cybersecurity and Infrastructure Security Agency Director Chris Krebs tweeted before the news conference.

Trump has frequently made baseless claims about voter fraud and has in the past refused to say if he would allow a peaceful transfer of power if he lost in the election, citing concerns about mail-in voting. There is no widespread voter fraud in the US, though isolated incidents do occur.

CNN obtained a voter intimidation email containing a link to the video from a Florida voter that is living overseas and did not wish to be identified.

Proofpoint, a cybersecurity company, also provided CNN with a copy of the video. Set to an instrumental version of Metallica’s “Enter Sandman,” the video is a screen recording of a “tutorial” that shows how a purported fraudulent ballot is allegedly cast by someone utilizing the Federal Voting Assistance Program. The computer’s background has the Proud Boys logo on it.

But the video is disinformation.

F​ederal write-in-absentee ballots, CISA says, are generally used by military and overseas voters as a backup in case they didn’t receive their absentee ballots. “Changing an election using fraudulently submitted FWABs would be highly difficult to do,” CISA’s election rumor control page reads. “This is because election offices have security measures in place to detect such activity.”

William Adler of the Center for Democracy and Technology ​told CNN, “This video is pretty clearly intended to communicate that all mail-in voting is rife with fraud, which is just not true.”

“You can’t just print out a bunch of ballots and send them in. You have to have identifying information,” Adler said, pointing to things like signatures. “There are those checks that would make it hard to fake lots and lots of FWAB’s.”

The link directed victims to a video hosted on OrangeDox.com, a file hosting site. Its CEO and co-founder Chad Brown says they removed it from the site after a news organization notified them of it.

“Orangedox does not condone the use of our services that might ‘violate the law in any way including publishing or sharing material that’s fraudulent, defamatory, misleading, or that violates the privacy or infringes the rights of others,'” Brown told CNN in a statement.

Enrique Tarrio, the chairman of the Proud Boys, denied the group sent the emails.

Andrew McCabe, a former deputy FBI director and CNN analyst, said the news conference shows how far the US government has come from the 2016 election, when it failed to react strongly to Russia’s foreign interference in the run-up to the election. He added that he wanted to learn more about the intelligence that Iran intended to hurt Trump.

“There should be really solid analysis underpinning that judgment and I just don’t think we’ve gotten enough of that detail from the information that was shared with the press this evening,” McCabe said.

Just before the news conference began, the top two members of the Senate Select Committee on Intelligence — Sens. Marco Rubio, a Florida Republican, and Mark Warner, a Virginia Democrat — released a joint statement warning about foreign interference in the election.

“As we enter the last weeks before the election, we urge every American — including members of the media — to be cautious about believing or spreading unverified, sensational claims related to votes and voting,” the statement read. “State and local election officials are in regular contact with federal law enforcement and cyber security professionals, and they are all working around the clock to ensure that Election 2020 is safe, secure, and free from outside interference.”

Sen. Angus King of Maine, an independent who caucuses with the Democrats, said in a statement that the developments showed that American voters are under attack.

“We likely will be facing this challenge through November 3 and beyond — so updates like these will be necessary as developments warrant,” King said. “The American people need to be skeptical and thoughtful about information they receive, and election officials need to be doubly cautious because they are being targeted.”

The Wednesday evening news conference came just one day after elections officials in Florida and Alaska contacted law enforcement because registered voters had reported receiving threatening emails that said, “Vote for Trump or else!” The emails came from an address that appeared to be affiliated with a far-right group, though an analyst who reviewed one email obtained by CNN said it had been sent using foreign internet infrastructure.

The Iranian-backed emails targeted Democrats and said “we will come after you” unless they switch parties and vote for Trump. This type of message could suppress Biden’s turnout and damage his standing in key states like Florida, where the emails were first spotted this week.

Along with Russia and China, Iran was named as one of three foreign adversaries seeking to interfere in the 2020 race in an unprecedented statement from Evanina, the intelligence community’s top election security official, on August 7.

“We assess that Iran seeks to undermine US democratic institutions, President Trump, and to divide the country in advance of the 2020 elections. Iran’s efforts along these lines probably will focus on on-line influence, such as spreading disinformation on social media and recirculating anti-U.S. content,” the statement, issued on behalf of the entire intelligence community, said.

“Tehran’s motivation to conduct such activities is, in part, driven by a perception that President Trump’s reelection would result in a continuation of US pressure on Iran in an effort to foment regime change,” it added.

The same statement said that the US intelligence community assesses “Russia is using a range of measures to primarily denigrate former Vice President Biden and what it sees as an anti-Russia ‘establishment.'”

Feds Say Russia And Iran Have Interfered With The Presidential Election