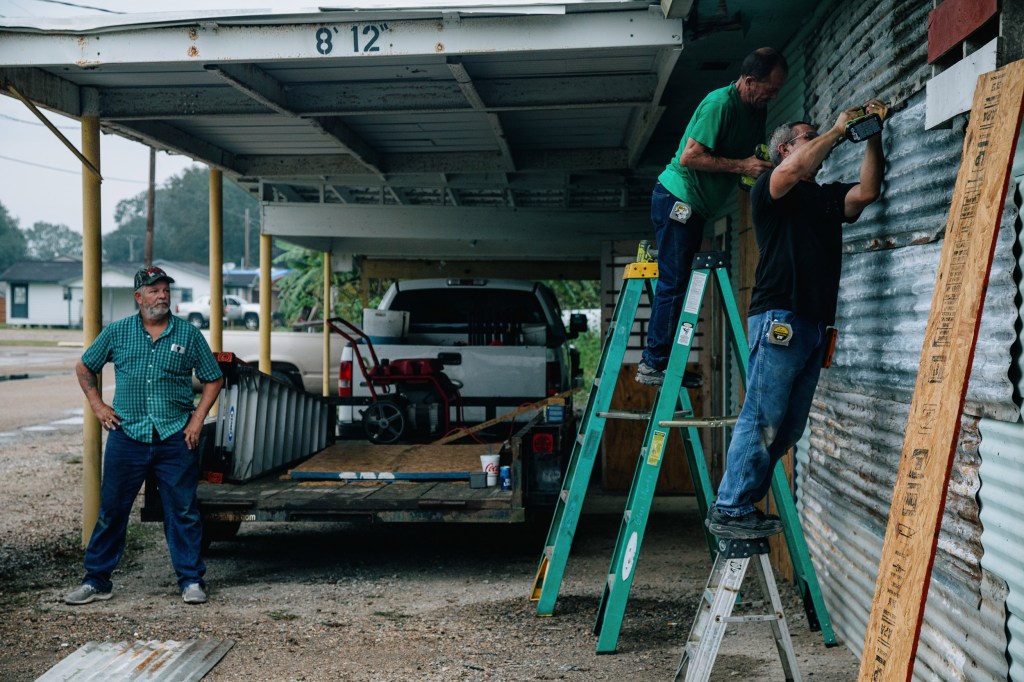 With fierce sideways rain pelting their homes and lashing winds tearing at their roofs — or the tarps covering the holes in the roofs from a previous storm — hundreds of thousands of people in Louisiana and southeast Texas waited out the fury of Hurricane Delta in the dark on Friday night.

Power was out in more than 453,000 homes and businesses, according to tracking website poweroutage.us, as the Category 2 storm roared ashore with winds approaching 100 mph. The storm has since weakened to a Category 1 as it moved inland.

Conditions along the coast had deteriorated rapidly as the storm approached and forecasters said the storm will weaken rapidly as it moves inland. But first, residents will have to deal with several hours of dangerous conditions, including life-threatening storm surge, said CNN meteorologist Tom Sater.

The center of Delta made landfall a little more than 10 miles from where deadly Hurricane Laura slammed into the coast in August. While Delta is not as powerful as Laura — which left much damage that still hasn’t been fixed — it does have a broader wind field, Sater said.

CNN’s Martin Savidge, in Lake Charles, Louisiana, said just after Delta made landfall that the rain was incessant and the wind increased dramatically.

Thousands of blue tarps that had been covering roofs damaged by Laura were blowing through the city. Debris piled up on road sides was being sent like missiles through the air.

He said early reports indicated flooding would be the biggest concern.

For residents who did not evacuate, who only got their power back last week, the lights were out again.

Among the dangers was flooding near the shoreline.

“The deepest water will occur along the immediate coast near and to the east of the landfall location (Creole, Louisiana), where the surge will be accompanied by large and dangerous waves,” the National Hurricane Center said.

Water that high is considered major flooding, according to the agency.

About 5.5 million people are under flash flood watches from Louisiana through southwest Tennessee.

In Louisiana, rainfall could exceed flash flood levels across most of the state, the National Weather Service said. Rain totals could reach 5 to 10 inches in most places, forecasters predicted. A few areas could see as much as 15 inches of rain.

“The fact that it’s weakening should not cause anyone to lose focus, or to lose vigilance,” Louisiana Gov. John Bel Edwards said at a news conference. “Because this is still a very strong problem. It is going to bring significant impacts to the state of Louisiana.”

Mandatory evacuation orders are in place in communities including Cameron Parish and Calcasieu Parish, home to Lake Charles. West Calcasieu Cameron Hospital in Sulphur began evacuating patients Thursday “out of an abundance of caution” to medical centers around Baton Rouge and New Orleans, with only a core team staying on site, according to a news release.

More than 9,500 people are in shelters ahead of the hurricane, Edwards said. Many of those people had evacuated in August during Laura, he added.

Four people were rescued unharmed by the Coast Guard after a storm surge left them stranded on dunes in Port Mansfield, Texas, on Friday, according to the Coast Guard.

‘I’m packing up to leave again’

In the Louisiana storm zone, residents are still recovering from Laura, Cameron Parish Sheriff Ron Johnson said Friday morning. Debris in roadways and power outages from the storm several weeks ago are the biggest concerns, Johnson said during a phone interview with CNN affiliate KPLC.

Some residents are sticking around, but the parish has a “pretty good evacuation rate” and is geared up to assist people sheltering in place, he said. Deputies were still patrolling the roads but would be pulled when winds reach 50 to 60 mph.

Leona Boullion told CNN affiliate KPRC her home in Cameron, Louisiana, was spared by Laura, but she wasn’t sure if she’d be as lucky this time around.

“I’m packing up to leave again,” Boullion told the affiliate. “I’m just hoping that I have something to come back to.”

In Gueydan, Doug Sonnier told CNN as of Thursday he still had workers repairing damage to the floor of the apartment above the barn — which lost its roof — at his hunting lodge. His business has also been severely damaged by the pandemic.

“It’s just getting old,” she said.

Jim Hayes told KFDM that he shares the same frustration as Terro. His home is still boarded up and his carport was destroyed by a tree that fell in his yard during Laura.

“We got (the tree) all cut down and moved, and now here comes another one,” he said.

Port Arthur sits on Sabine Lake, on the border of Texas and Louisiana, about 15 miles north of the Gulf of Mexico.

Flooding has been reported in Port Arthur, with water coming out of the channel between the Gulf and the lake, and spilling onto Texas highway 87, Bartie explained.

“We have no power even here. I am in the city hall right now, and our generator did not cut on for whatever reason. So, we are experiencing some discomfort,” Bartie explained. “We have had consistent precipitation since about nine or 10 this morning. We had wind gusts and all these other things.”

“We are experiencing some havoc even on the western side of Delta,” the mayor added.

Bartie said he and others in Port Arthur are getting tired of dealing with hurricanes during this historically active season, which has seen four named storms in the Gulf Coast.

“At this point I’m all hurricaned out, and I know that my citizens are,” Bartie told CNN.