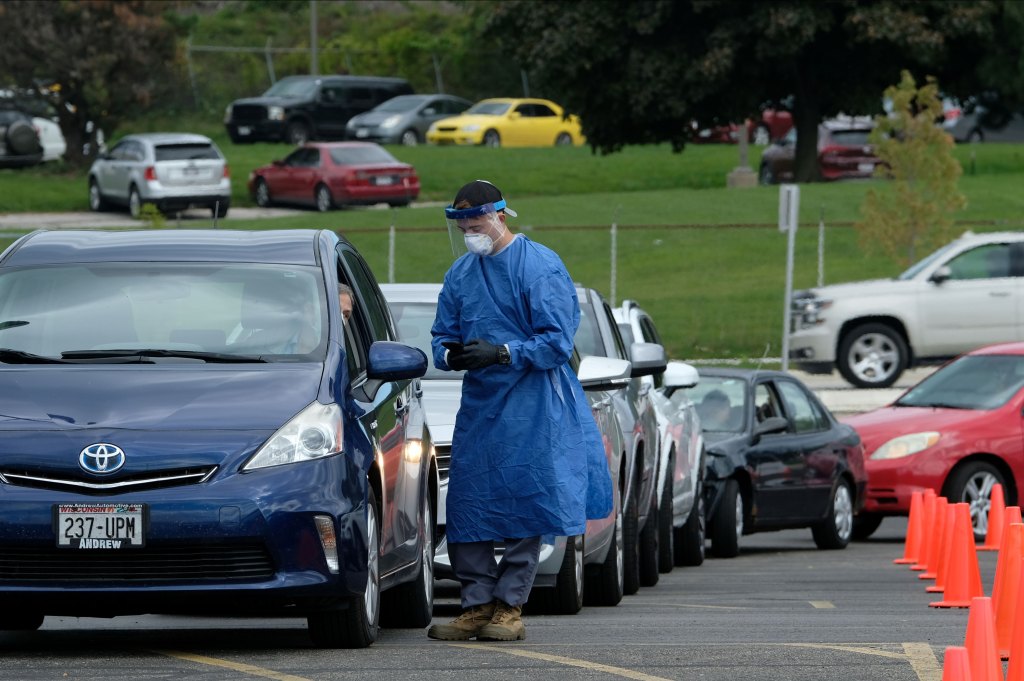 A Centers for Disease Control and Prevention forecast that combines the data from dozens of independent models predicts US deaths from Covid-19 could reach 233,000 by the end of the month.

“This week’s national ensemble forecast indicates an uncertain trend in new COVID-19 deaths reported over the next four weeks and predicts that 2,800 to 6,800 new deaths will likely be reported during the week ending October 31,” the CDC says on its website.

More than 212,000 Americans have already lost their lives to the virus, according to Johns Hopkins University.

Workers in Florida’s Miami-Dade County spent overnight hours sanitizing an elementary school after a student tested positive for the virus.

It is the first positive test result since the school district, one of the nation’s largest, reopened Monday. But officials said the student didn’t contract the virus at the school.

“It was almost inevitable that as we reopen schools, some of these cases would happen,” Superintendent Alberto M. Carvalho said.

Contact tracers notified Wednesday night people who had close contact with the student. They were asked to be tested and quarantine for at least 14 days before being cleared to return to schools, according to Carvalho.

The student will remain at home until cleared by health officials to return, officials said.

“It is something I think we all expect is going to happen,” parent Jessica Blais, who was outside the school Thursday, told CNN affiliate WSVN. “This virus is not going anywhere. I think the school is doing everything they can to assure that our kids are going to be safe.”

Vivian Perez told WSVN that she was reinforcing safety measures with her son.

“I just make sure he’s OK, that he keeps his social distancing, that he washes his hands, (wears a) face mask,” she said.

The district educates 437,000 students in 435 schools across the county.

New cases on the increase across country

Covid-19 cases are trending upward across the US, with only two states reporting a decline of cases compared to last week. And hospitalizations across the country have also begun to rise, according to data from the COVID Tracking Project.

Wisconsin health officials reported a record-high number of 141 new patients Wednesday, days after the state saw records in new Covid-19 cases and deaths. Gov. Tony Evers announced the state will open a field hospital in response to the surge in hospitalizations.

“We obviously hoped this day wouldn’t come but, unfortunately, Wisconsin is in a much different and more dire place today, and our health care systems are being overwhelmed,” Evers said.

Other state leaders say they’re not trailing far behind.

“Our hospitalization rates are surging and beginning to place a strain on our healthcare system (especially staffing),” Utah Lt. Gov Spencer Cox wrote on Twitter. “Sadly, we are now seeing increased fatalities. The Wisconsin announcement should be a sobering reminder as Utah isn’t far behind in infection rates.”

Montana, Nebraska, North Dakota, Oklahoma, South Dakota and Wyoming have all seen record-high hospitalization numbers in the past days.

The uptick in Covid-19 patients comes as the US approaches winter with a daily Covid-19 base line that experts say is far too high. For the first time since August, the nation is averaging more than 44,000 new Covid-19 cases daily, according to data from Johns Hopkins University — an average that won’t help as the country enters what health officials say will be a challenging season.

At least half of US states, scattered across the Midwest and Northeast, are reporting more new cases than the previous week, according to Johns Hopkins. Alabama and Hawaii are the two states with a decline in cases.

The antiviral drug remdesivir shortens recovery time by about a third in severely ill, hospitalized adults with Covid-19, but does little to help those with milder cases, according to results from the first large controlled study of the drug.

Final results of the study, published in the New England Journal of Medicine, support a preliminary report published in May, according to Dr. Kay Tomashek, a medical officer at the National Institute of Allergy and Infectious Diseases, who worked on the study.

“The good news about that is that the results have not changed since then; they haven’t changed, and they even looked better,” she told CNN, noting that the research team and the journal wanted to get the results out to the world quickly, “especially because this is the first drug found to be effective against Covid-19.”

She said the median recovery was 10 days with remdesivir versus 15 days with a placebo. Patients who were given remdesivir were more likely to improve by day 15.

“The bottom line is that remdesivir is superior to placebo in the treatment of hospitalized patients with Covid-19,” she said.

Remdesivir, which works by blocking viral replication, is the only drug specifically for Covid-19 with an Emergency Use Authorization from the US Food and Drug Administration.