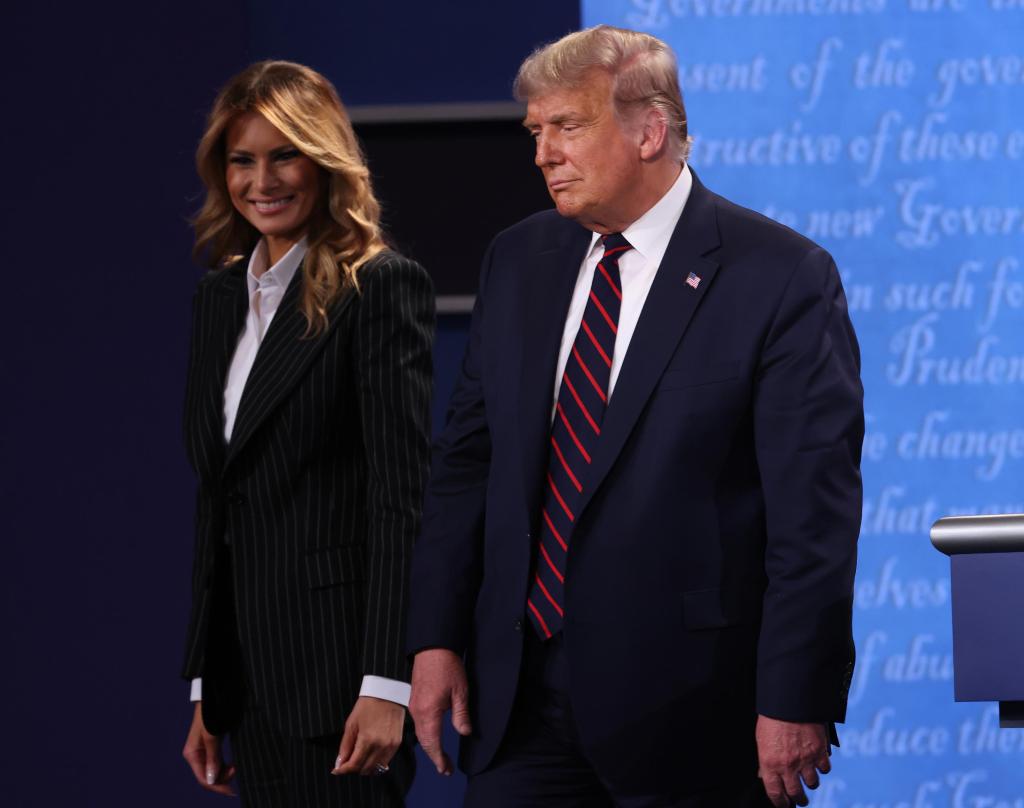 (CNN)-President Donald Trump’s diagnosis with Covid-19 presents a stunning new twist in a tumultuous year, throwing an election that is only 32 days away into chaos and raising the grave possibility of more American crises over governance and national security at an already perilous moment.

Most immediately there is concern for the health of Trump himself, who as an overweight 74-year-old is at an elevated risk of complications from the virus, as well as for first lady Melania Trump, who also tested positive.

But attention will inevitably focus on the hubris of a President who mocked mask wearing and social distancing, ignored and downplayed the virus, courted disaster with packed campaign rallies, ridiculed his Democratic opponent Joe Biden for taking prudent precautions, and even now says the emergency is almost over.

Still, even amid the country’s bitter cultural wars, stoked by Trump more than anyone, key political figures and his domestic adversaries will wish him well. A President in medical peril is a situation that calls for humanity. The most serious known threat to a commander-in-chief’s health for decades also calls for unity since it can bear on the security of the nation itself should US enemies seek advantage and probe a potential leadership vacuum. An already weak economy is under additional pressure: stock futures dipped 400 points when news of the President’s condition, which followed earlier confirmation that his close aide Hope Hicks had Covid-19, broke.

In virtual remarks to the Al Smith Dinner on Thursday the President who has said a “miracle” will sweep the virus away said: “I just want to say that the end of the pandemic is in sight.”

But Trump’s diagnosis underscores how a virulent pathogen takes advantage of any slip in vigilance and is everywhere as the emergency deepens ahead of an expected fall spike after another 857 American deaths were recorded Thursday.

It also provokes yet another serious national challenge in a season of tragedy and political and social unrest, that encompasses the pandemic, a consequent economic crisis, a generational racial reckoning and concerns for American democracy after Trump failed to guarantee a peaceful transfer of power.

One critical question is what happens next in an election that is only a month away. Trump will now have no choice but to remove himself from the campaign trail for a prolonged period. Trump has mild symptoms of the virus, a White House official told CNN. A person familiar with the matter said Friday afternoon that Trump had had a fever since that morning. According to people who interacted with the President Thursday, he appeared tired, but was not displaying major symptoms. Even if he and the first lady are not seriously affected, medical advice suggests that they should isolate for at least 10 days after symptoms appear — nearly half the length of the time remaining in the presidential race.

Trump’s positive test is a political disaster for his campaign — given that he is lagging behind Biden in many swing states and already seemed to need a game changer event in his favor to come from behind in the limited time remaining.

The next presidential debate — following Trump’s tantrum-filled performance last week — is in particular doubt. The clash is scheduled for October 15 in Miami. And though Vice President Mike Pence tested negative for the virus Friday morning, he has been around top aides and the President in a White House that is now a virus hotspot, so there must be doubts that his showdown with Democratic vice presidential nominee Sen. Kamala Harris of California can go ahead as planned on Wednesday night.

The staggering news of Trump’s plight — which he communicated in an overnight tweet — means that Biden — another elderly man vulnerable to Covid-19 complications, who was across an indoor stage from a shouting and venting President for 90 minutes at their debate on Tuesday night, will probably also have to be tested for the coronavirus which can spread through airborne droplets.

The image of the Trump entourage ostentatiously removing their masks in the audience before the debate is now especially resonant.

And another top Republican official, Ronna McDaniel, the chairwoman of the Republican National Committee, has tested positive for coronavirus, an official told CNN Friday.

A sensitive moment for Biden

The President’s diagnosis creates a sensitive moment for Biden who must find the right tone in the days ahead and decide whether to reduce his own campaign commitments in deference to the President’s condition.

He tweeted Friday morning wishing the President and first lady “a swift recovery.”

Unless he is incapacitated, Trump will still be able to use his Twitter feed to keep his increasingly desperate antics in front of Americans and will likely have an open line to conservative media during his confinement. In such circumstances, Biden may be loath to curtail his own visibility after a campaign in which he spent long periods self-isolating at home and holding virtual events. But as the candidate who is in the lead as more and more states begin early voting, he may accrue some political advantage from a frozen campaign given the President’s inability to campaign outside Washington. Trump’s condition now also seems to play into Biden’s argument that the President has been criminally negligent over the pandemic for the entire year.

There may also be some discussion about the timing of the Senate GOP’s breakneck push to confirm Amy Coney Barrett as Trump’s third Supreme Court pick. The judge was with the President and others in a White House where few were wearing masks as recently as Saturday and may have to take measures to self-isolate if proper medical protocols are being followed.

It now seems likely that the West Wing will have to shut down entirely and continuity of power precautions will need to be taken to secure Pence, who may already also have been exposed to the virus.

In an apparent attempt to project a sense of calm, the President’s physician Navy Commander Dr. Sean Conley put out a memo.

“Rest assured I expect the President to continue carrying out his duties without disruption while recovering, and I will keep you updated on any further developments,” he wrote.

There will also now be a premium on transparency and honesty from a White House that has trashed the truth at every turn for nearly four years. Officials have failed to offer the traditional visibility into the specifics of the President’s health. There is still a mystery for instance over Trump’s unscheduled trip to Walter Reed hospital in November 2019. According to a recently published book by New York Times reporter Michael Schmidt, Pence was put on standby to assume temporary presidential powers in the event Trump needed to be anesthetized. The President added to the intrigue with an unprompted assurance that he had not suffered a “series of mini strokes.”

As the days go by, especially if the President does not develop serious complications from Covid-19, there will be increasing discussion of his recklessness amid a crisis that has killed more than 200,000 Americans. His conduct not only endangered himself and those around him. It is causing uproar around a presidential election — the most important symbol of American democracy. The President has become the third of a trio of world leaders who were cavalier about the virus, apparently for political reasons, to get infected.

Both British Prime Minister Boris Johnson and Brazilian President Jair Bolsonaro conquered the disease, though Johnson spent time battling for his life in a London hospital when he developed severe respiratory problems and had a prolonged period of convalescence.

The extreme negligence of Trump and close aides in allowing the President to share his Marine One helicopter with others — Hicks was likely infectious while traveling with him on Wednesday — meanwhile displays contempt for fate and the idea of competent government. It is in keeping with the chaotic manner in which he has run his White House all along. Trump’s insistence on all but ignoring the danger of the virus and then getting infected is the most flagrant occasion in which he has put his own political aspirations ahead of the duties that he holds to his office and to the safe conduct of the election and leadership of the country as President of the United State.

International leaders immediately on Thursday sent support to the President.

“I send all my best wishes to Donald and Melania Trump. I hope that you will get over the #corona infection and will soon be completely healthy again,” German Chancellor Angela Merkel, who has frequently clashed with the President, tweeted. Israeli Prime Minister Benjamin Netanyahu said he and his wife Sara were thinking of the Trumps. And Kremlin spokesman Dmitry Peskov said “we certainly wish President Trump a speedy recovery.”