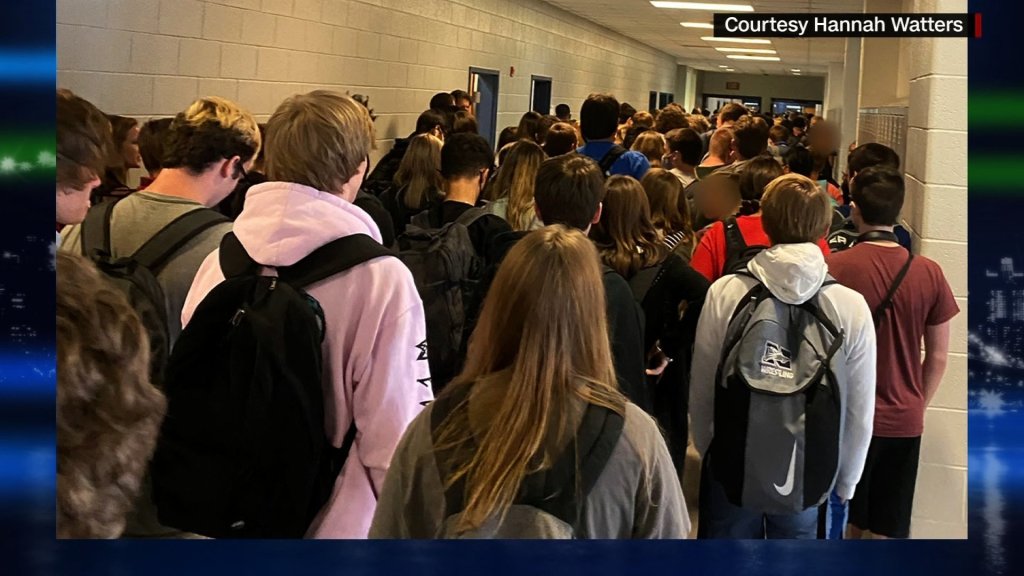 The mother of a student who was suspended after posting a photo on Twitter that showed her high school’s crowded hallways this week tells CNN that her daughter’s suspension has been reversed.

The viral photo showed students at North Paulding High School, outside Atlanta, crowded in hallways and with few visible masks. Hannah Watters, the sophomore who posted it, said she was initially suspended over the act.

Hannah’s mother, Lynne Watters, spoke with the school’s principal Friday morning by phone, she told CNN. The woman was told her daughter would not be suspended and that a suspension would not appear on her daughter’s record.

Hannah will be in school on Monday, she and her mother told CNN.

As schools have opened for the new academic year around the country, parents and administrators are making difficult decisions about how to ensure students get the education they need while also staying safe in an ongoing pandemic. While many have responded to the resurgence of cases with completely remote schooling, others have opted to return to classrooms, which the nation’s top infectious disease expert, Dr. Anthony Fauci, has said works if safety measures are the priority.

Hannah felt compelled to share what it looked like inside her school, so she took a photo of the scene and posted it to social media, she told CNN on Thursday.

Her daughter posted the photo to social media after regular school hours, and North Paulding High School students are allowed to use their cell phones during class, Watters said.

CNN has reached out to North Paulding High School and the Paulding County School District.

In a letter to the community, Superintendent Brian Otott said the photo was taken out of context, writing: “Class changes at the high school level are a challenge when maintaining a specific schedule. It is an area we are continuing to work on in this new environment to find practicable ways to further limit students from congregating. Students are in this hallway environment for just a brief period as they move to their next class. … There is no question that the photo does not look good. … Wearing a mask is a personal choice, and there is no practical way to enforce a mandate to wear them.”

Watters said the time to move from one class to another only lasts about five minutes, but students from all classes are often speed-walking from one end of campus to the other, passing by countless people.

‘Some good and necessary trouble’

But students in grades 9 through 12 are exempt from the phone ban, she said, and she didn’t post the photo until school was over. Hannah admitted she broke the policy on posting images of students to social media, but she doesn’t regret it.

“I’d like to say this is some good and necessary trouble,” she said. “My biggest concern is not only about me being safe, it’s about everyone being safe because behind every teacher, student and staff member there is a family, there are friends, and I would just want to keep everyone safe.”

Otott’s letter to parents said that the school district anticipated needing to make “adjustments.” The district previously decided to make Thursday and Friday virtual learning days for students receiving in-person instruction, “so that all of our schools can step back and assess how things are going so far,” Otott said.

Asked Friday about the photo, Georgia Lt. Gov. Geoff Duncan echoed Otott’s letter, saying school districts would need to “make adjustments” as they figure out how to best educate students, calling it a “work in progress.”