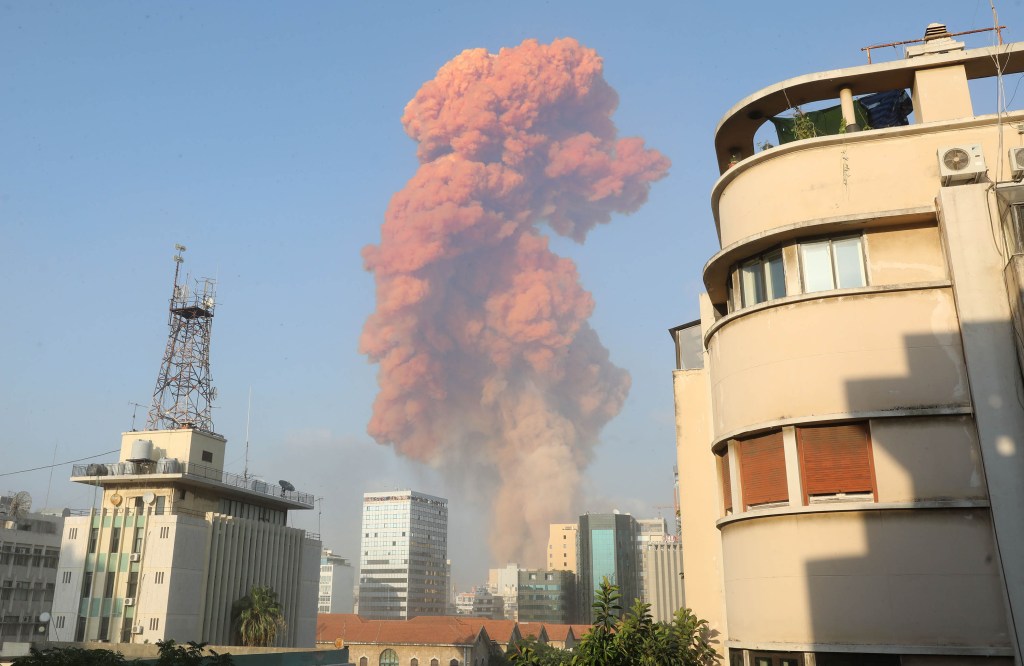 What We Know About The Beirut Blast

A massive explosion rocked the Lebanese capital of Beirut on Tuesday evening, leaving at least 135 dead and thousands injured.

The blast has been linked to a large supply of confiscated and potentially unsecured explosive material, stored in a warehouse at the city’s port, close to populated areas. As world leaders and international organizations step in to offer assistance, local officials are also launching an investigation into the blast.

Authorities scrambled on Wednesday to treat the wounded, search for survivors, and assess the full extent of the damage.

Here’s what we know so far.

The basics: What, where, when

The explosion took place at 6:07 p.m. local time Tuesday near Beirut’s port and central district, close to many highly-populated areas and tourist sites.

Nearby landmarks include the historic Martyrs’ Square; the Gemmayzeh and Mar Mikhael neighborhoods, fixtures of the Beirut bar scene; the landmark Mohammad Al-Amin Mosque; Grand Serail, the government palace; and Baabda Palace, the official residence of the Lebanese President.

The explosion tore through the city, flipping cars, shattering glass and causing some homes to crumble. Damaged buildings include the headquarters of former Prime Minister Saad Hariri and CNN’s bureau in downtown Beirut. Homes as far as 10 kilometers (6 miles) away were damaged, according to witnesses.

Beirut’s governor Marwan Abboud told reporters that the explosion had resulted in an estimated three to five billion US dollars’ worth of damage. NNA, Lebanon’s state-run media, reported that 90% of hotels in the Lebanese capital had been damaged.

The blast was even felt in Cyprus, around 240 kilometers (150 miles) away, and registered as a 3.3 magnitude earthquake.

A crater created by the explosion appeared to be roughly 124 meters (405 feet) in diameter, or well over a football field in length, according to CNN analysis of a Planet Labs, Inc. satellite image.

CNN utilized geospatial software to measure the satellite imagery of the explosion site. The 124-meter diameter is accurate within 10 meters.

What are the casualties?

At least 135 people were killed in the blast and another 5,000 wounded, officials said, and the death toll was expected to rise.

Beirut’s governor, Marwan Aboud, told Jordan’s state-owned channel Al Mamlaka that at least 300,000 people were “unable to sleep in their homes,” adding that “half of Beirut’s population have homes that are unliveable for the foreseeable future — for the next two weeks.”

Among the dead are the secretary-general of the Kataeb political party, Nazar Najarian, according to NNA. He was in his office when the explosion happened, and died after being critically injured.

Two Filipino citizens also died from the explosion, and eight others are injured, said a statement from the Philippine Embassy in Beirut. Eleven other Filipino seafarers are still missing.

At least one Australian and one American were killed, according to officials from those countries. The Australian Embassy building has been “significantly compromised,” said Australian Prime Minister Scott Morrison.

Twenty-one French citizens, several Americans, one Japanese citizen, one Indonesian, and six Turkish citizens were also injured, according to authorities from the five countries.

“All U.S. Chief of Mission personnel in Beirut are safe and accounted for and U.S. Embassy Beirut is open,” the US State Department spokesperson said Wednesday.

Some naval peacekeepers with the United Nations Interim Force in Lebanon (UNIFIL) have also been injured, some seriously. They have been transported to hospital for treatment, said UNIFIL.

What caused the blast?

There have been conflicting reports of what caused the blast. Initially the explosion was blamed on a major fire at a warehouse for firecrackers near the port. But on Wednesday morning, Prime Minister Hassan Diab said that about 2,750 metric tons of ammonium nitrate, a highly explosive material, had been stored at the port for the past six years “without preventive measures.”

Court documents obtained by CNN show that the ammonium nitrate came to Beirut on a Russian-owned ship in 2013, which had originally been headed to Mozambique. It stopped in Beirut due to financial difficulties and unrest among the crew — and never left again. The crew abandoned the ship, which was detained by authorities, and the ammonium nitrate on board was stored in a hanger at the port — just a few minutes’ walk from shopping and nightlife districts.

The documents showed that Badri Daher, the Director of Lebanese Customs, warned for years of the “extreme danger” of leaving the ammonium nitrate at the port.

Daher told CNN that customs officials had written to legal authorities six times requesting for the dangerous cargo be removed from the port, but the requests went unheeded.

Diab announced an investigation into the explosion, saying the probe would include “revelations that will be announced about this dangerous warehouse which has been present since 2014.”

“I will not rest until we find those responsible for what happened, hold them accountable, and impose maximum punishment,” he said in a statement, saying it was “unacceptable” that so much ammonium nitrate had been stored “while endangering the safety of citizens.”

However, experts have cautioned that the blast could have been caused by more than just ammonium nitrate.

Anthony May, a retired ATF explosives investigator for the US government, said the color of the cloud after the blast suggests there may have been other compounds involved. And Robert Baer, a former CIA operative with extensive experience in the Middle East, said “that orange ball (of fire)” indicated possible military grade explosives.

What is ammonium nitrate?

Ammonium nitrate (AN), a compound of ammonia and nitrogen, is a highly volatile material used in agricultural fertilizers and bombs.

Disasters involving AN are rare, considering the US uses millions of tons of it every year in fertilizers, according to the Environmental Protection Agency. “Pure” solid AN is quite stable, but if the compound is mixed with any contaminants, even in small traces, the mixture becomes much more prone to detonation — which is why there are normally stringent government guidelines for how to treat and store it properly.

“In general, the conditions of AN storage are crucial to the safety and stability of the AN. Materials co-located or stored with AN may play a role in its sensitivity to explosion,” said the EPA in a 2015 guide.

For instance, AN shouldn’t be stored with any fuel, organic materials, chlorides or metals, said the guide — all potential contaminants. The EPA guidelines also recommend fire resistant walls in the storage unit, noncombustible flooring, and — crucially — controlled temperatures.

AN doesn’t burn, but if exposed to heat, it can melt — which releases combustible toxic gases that can cause an explosion. It’s even more dangerous if there is a large supply of AN all stored together, because once a small section of AN begins to melt and explode, the resulting heat can set off the rest of the supply.

One of the worst disasters in US history involving a form of ammonia occurred in April 1947 when a ship loaded with ammonium nitrate caught fire while docked in Texas City. The fire caused an explosion and additional fires that damaged more than 1,000 buildings and killed nearly 400 people, according to the website of the Texas Historical Association.

For perspective, that explosion was triggered by 2,300 US tons (about 2087 metric tons) of ammonium nitrate, according to US Homeland Security.

And the 1995 Oklahoma City Bombing, a US domestic terror attack that killed 169 people and injured 467, used only two US tons (1.8 metric tons) of ammonium nitrate.

What are the ongoing response efforts?

In the hours following the bombing, authorities and humanitarian organizations launched search and rescue efforts. The Lebanese President has directed all armed forces to respond to the disaster, and to patrol affected areas for additional security.

Lebanon has allocated 100 billion Lebanese pounds — which, according to the government rate, is about $66,335,000 — to deal with the effects of the blast, the Levbanese Presidency Twitter account said Wednesday.

Aid groups like UNICEF and the Red Cross mobilized teams on the ground and put out urgent open calls for blood donations.

Hospitals were quickly inundated, with doctors conducting triage as dozens flooded into emergency rooms. The emergency section of one major hospital, the American University of Beirut Medical Center, became unable to receive more patients. Four hospitals were out of service after sustaining damage in the explosion, said the health minister.

The Lebanese Red Cross said on Wednesday that multiple temporary shelters with food, hygiene kits and basic needs have been set up to receive 1,000 families. The United Nations and World Health Organization are also working with Lebanese authorities.

President Trump, Australian Prime Minister Morrison and Russian President Vladimir Putin all offered support and assistance. Russia has sent five planes carrying medical equipment and a team of doctors to set up a field hospital in Beirut, according to state news agency TASS.

French President Emmanuel Macron said “rescue and aid” were on the way to Lebanon, and Israel has formally extended humanitarian medical assistance. The United Kingdom said it would send medical and search and rescue experts to help, along with 5 million pounds (about $6.6 million) in aid to Lebanon.

Egypt has also set up a field hospital that has received a number of patients in Beirut, said a spokesman for Egypt’s Ministry of Foreign Affairs.

Meanwhile, Lebanese authorities have taken the first steps in their investigation into the incident. An unknown number of officials have been placed under house arrest, the Lebanese Minister of Displaced People Ghada Shreim said Wednesday.

These include officials involved in the storage, guarding, and investigation of the hangar from 2014 until today, Shreim said.

How can I help?

Several charities are on the ground providing medical care, shelter, supplies and other services to help the city recover and rebuild.

You can help raise funds for supplies and assistance so desperately needed by clicking here.

What We Know About The Beirut Blast