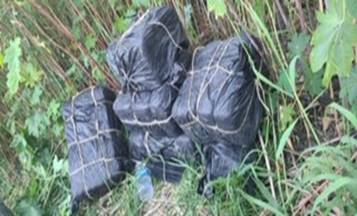 Border Patrol Seize Nearly $15M in Narcotics over the Weekend

On Sunday afternoon, agents working near Rio Grande City, Texas, observed a Chevrolet pickup suspected of smuggling narcotics driving away from the Rio Grande. Agents and Texas Department of Public Safety (DPS) troopers attempted to conduct a traffic stop. The driver of the pickup refused to stop for DPS and a pursuit ensued. The vehicle came to a stop after the driver lost control of the pickup and rolled over. As agents and troopers approached the wreck, the driver abandoned the vehicle and fled the scene. Near the bed of the truck, agents and troopers located several bags containing bundles of cocaine. The cocaine weighed more than 450 pounds and is worth an estimated $14.5M.

That same afternoon, agents working near Garceno, Texas, observed fresh shoeprints coming from the Rio Grande and heading further into the United States. Agents followed the trail and located six bundles of marijuana. As agents searched the immediate area, they observed several subjects jump into the Rio Grande and swim back to Mexico. The marijuana weighed over 300 pounds and is worth an estimated $240K.

Additionally, Kingsville agents working at the Javier Vega Jr. Checkpoint referred a Dodge Van to the secondary inspection area after a canine alerted to the vehicle. At secondary, agents searched the van and discovered a jar containing marijuana and located a loaded 9mm handgun. Agents arrested the driver and passenger of the van and turned the case over to the Kenedy County Sheriff’s Office. This is the third weekend in a row that agents encountered subjects with loaded fire arms at RGV Sector checkpoints.

Border Patrol Seize Nearly $15M in Narcotics over the Weekend