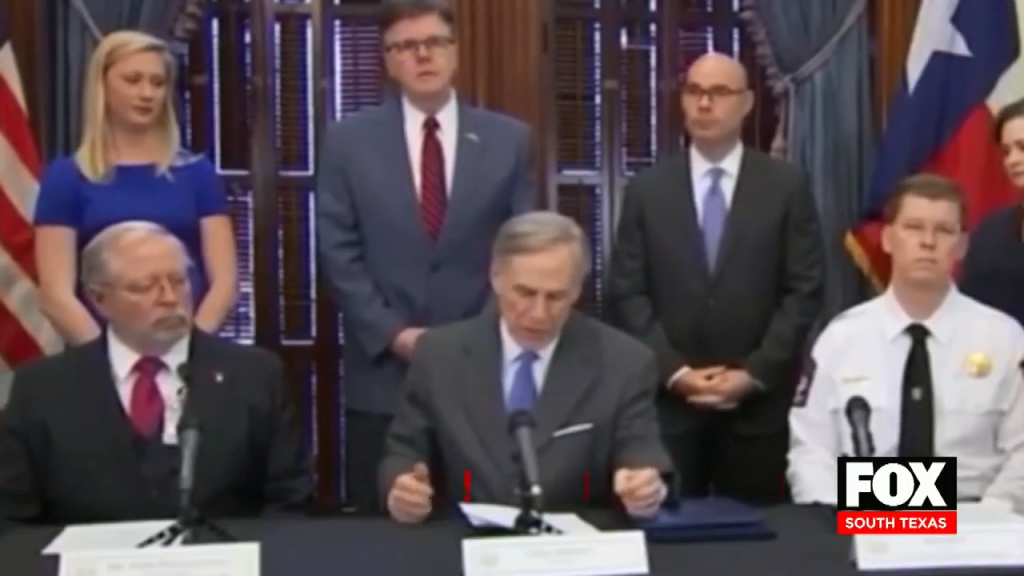 Gov. Greg Abbott entered a room outside of the State Operations Center at 1:13 p.m. He was joined by Dr. John Zerwas, a physician from Richmond who is on a team working to expand hospital capacity and procure needed medical supplies.

The room is surrounded by screens that read: “Texas Hospital Bed Capacity, June 16, 2020.”

“We are here today to let Texans know about the abundant hospital capacity that exists to treat Texans who may test positive for COVID-19.”

Abbott said fewer Texans test positive for COVID-19 than residents in any large states in the U.S. He added that Texas has one of the lowest death rates and few Texans who test positive have to go to the hospital in the first place.

Abbott says two counties, Jefferson and Pecos counties, had an “outsized influence” on the number of Texans testing positive for COVID-19. For example, a federal prison in Beaumont brought back a batch of positive tests for inmates “that all came in at once.”

“I want you to know that this is the same type of analysis that we use on an ongoing basis as we look into each and every county across the entire state of Texas to figure out exactly what is going on,” Abbott said.

Today’s number of positive cases, 2,622, is a new high for Texas, which Abbott says is because of a large number of tests out of an assisted living center in Collin County. Hays County is another example of a large increase, Abbott said.

“It seems like these numbers were batched together and averaged out,” he said.

One day after his comments on 20-somethings testing positive for COVID-19, Abbott reiterated that statement, saying there are multiple reports in certain counties “where a majority of the people who are testing positive in that county are under the age of 30.”

“In addition to those testing positive, are those numbers that you’ve been seeing about an increase in the number of people who are hospitalized because of COVID-19,” Abbott said.

Today’s hospitalization number is 2,518, Abbott said, adding that Zerwas will break down those numbers further. “That’s really a very small percentage of all the beds that are available.”

Abbott says new medical strategies, treatments and additional PPE have better prepared Texas to respond to COVID-19: “We are better prepared to deal with COVID-19 today than we were in March and April.”

The governor recommended that people stay home, which he says is especially true for those with an underlying health condition or who are 65 and older.

He reiterated that Texans should wear masks while out in public because asymptomatic people can spread the coronavirus.

“Businesses have learned safe strategies both for their employees as well as their customers to make sure that they’re preventing the spread of COVID-19,” he said.

Abbott says Texas doesn’t have to choose between either returning jobs or protecting health care.

“We do have the tools and the strategies in place where we can achieve jobs being maintained without jeopardizing public health. “