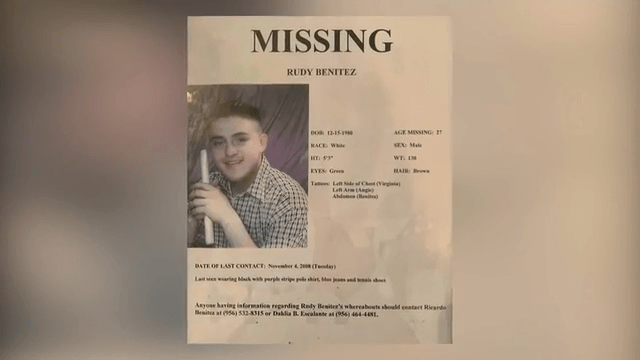 In Weslaco, it has been almost a decade since the disappearance of 28-year-old Rudy Benitez. His mother says all she wants is closure and she will not stop searching until she gets the answers she wants.

“All I want is to know what happened to him if they took him to Mexico or they killed him here but all I want to know is where his body is so I can have closure.”

Benitez has been missing since November 4, 2008. According to his mother, her son took a bad deal from two older men.

“He was there with his friends and that’s where they went to pick him up. It was two men and they picked him up in a truck and he was sitting in the middle and he did say bye and that’s all we heard about.”

Benitez’s has two children who also want to know what exactly happened to their father.

“Especially the older one cause the younger one all he does is cry because he only sees pictures of him so he cries because he doesn’t have a dad.”

Benitez’s aunt says his disappearance was very hard for the entire family, but although he has been missing for many years, they have hope that he will return home.

“Like there have been so many cases that for many years people get lost and someday show up so there’s always that grain of hope that we have.”

The Benitez family asks those who know information on Rudy’s disappearance to come forward with answers. You can contact the Hidalgo County Crime Stoppers at (956) 668-8477.